Meet Our Vaqueros: Up and Coming Players this Season 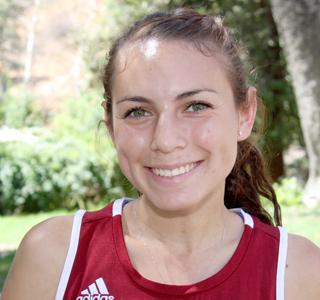 Bio: Originally from Omaha, Neb., Sanders attended Loyola High School in Los Angeles before coming to Glendale. He chose the campus because he immediately hit it off with coach Carver Russaw and the college was the first to recruit him. He will major in either business administration or psychology and plans to transfer to a Division 1 school on a scholarship. He is proud to say that he is being scouted by more schools than expected, especially from the Pac-12, which includes schools like UCLA, UC Berkeley and USC, in addition to Arizona State University and the University of Washington. As a student athlete, Sanders said he has learned how to balance his sports life with his academic one.

“My goals for the rest of the season are, of course, to win the championship and to continue to get better with my team,” he said.

Bio: Glindyll Mancia, 19, is a sophomore captain for the Women’s Cross Country and Track and Field teams. She is also a middle distance runner for track and field.  Mancia is majoring in Social Work and wants to transfer to a school in San Diego.  As a student athlete, she has learned that hard work and dedication pay off. Her main goal for the rest of the season is to be in the front of the pack with the cross country team at state and to win.

“I have learned to trust the coaches,” said Mancia. “They are there to help you and they just want you to succeed.”

Bio: Twenty-two year old Akram Abduirahman is  an international student  from Sweden and serves as both a team captain and a freshman defender. He decided to attend Glendale College because he found it to be the best way to accomplish his dream of playing intercollegiate soccer in the United States. Abduirahman is majoring in environmental science and plans to transfer to a four-year school, with Boston University topping his list. As a student athlete, he has learned how to lead a team and tries to set a good example both on and off the field. He has also learned in-depth fundamentals of soccer and attributes Glendale College to helping him grow stronger as a player. He hopes to lead the team to success and to perform well himself.

“Both of my coaches constantly push every player and urge everyone to perform at their absolute capacity,” he said.

Number and Position: 3, Running Back

Bio: Freshman Watkins attended Chaminade High School before enrolling at Glendale College. He has not declared a major yet; however, he plans to major in communications upon transferring. Some of his desired  schools include San Diego State University,  University of Arizona and the University of Kansas. Being a student athlete at Glendale has helped him learn that perseverance is the key to success, no matter what path somebody takes.

“My goal for the rest of the season is just to improve in the areas that are weak, so we [the team] can truly be unstoppable,” said Watkins. “And to never stop working hard until we win our last game, which is hopefully the championship.”

Bio: Brayley, 20, is a key player on the men’s soccer team, filling various roles, including team captain, midfielder and defender. His best friend Harley Faye, a fellow Vaquero athlete on the baseball team, encouraged him to enroll at Glendale College. He is majoring in kinesiology but has yet to decide where we wants to transfer. Brayley’s goal for the team is to make playoffs. A personal goal is to get noticed by other schools.

“As a captain, I have learned to be responsible,” he said. “Being on time, making sure my team is comfortable and focused, as well as trying my hardest during every workout, practice and game.”