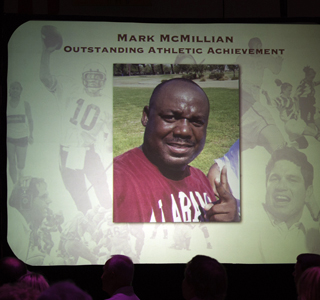 The Glendale Athletic Hall of Fame welcomed six new members at a ceremony and banquet on Oct. 11.

The first inductees of the night were from the 1974 Men’s Cross Country team. Led by coaches John Tansley and Mark Covert, the 1974 team won its first state championship in school history. Since then, Glendale’s cross country teams have gone on to win 11 state titles – five for the men’s team and six for the women’s team.

One of the men’s team’s brightest stars was runner Bobby Thomas, who went undefeated in that 1974 championship year and in the individual state cross country championship. Thomas credited Tansley’s hiring of the 1970 NCAA Division II champion Mark Covert as an assistant coach, who Thomas believed contributed to the team’s soaring success that year.

The second inductee, Kelly Korras, was awarded for Outstanding Athletic Achievement. She marked the first softball played to ever be included in the Hall of Fame.

Korras arrived at Glendale College after she was rejected from Cal State Northridge’s softball team.

“I was going to give up on softball,” she said. “My parents encouraged me to see where my older brother was coaching, which was at Glendale with Coach David “Hawk” Wilder. I really liked the girls and Coach Hawk. They were great coaches, and so in the spring I decided to transfer from Cal State Northridge to GCC and joined the team.”

The decision couldn’t have been better for Korras. During her years at Glendale, her athletic abilities and dedicated training led her to become one of the top players in the Western State Conference.  In 2007, she was named Glendale College Softball Rookie of the Year. She was also awarded the league’s Pitcher of the Year, All-State selection and Women’s Softball Player of the Year, all in 2008 as she pitched a 1.26 earned run average.

After Glendale College, Korras transferred to Chaminade University in Hawaii and then went on to play for the South African national team.

The third inductee of the night, Harry Hull, was inducted for his Meritorious Service.  Psaltis said that Hull probably felt uncomfortable being in the spotlight because, as an emeritus leader of the college’s Foundation board for 22 years, he has always wanted things to be about the people he has helped than about himself.

“That’s just been my nature,” said Hull. “When I’m a part of something, I always want it to be more about the people I’ve served, not just me.”

Hudson Houck received the Pillar of Achievement award and, in addition to his Glendale College Hall of Fame indictment, was added to Crescenta Valley High School’s Hall of Fame. Houck not only coached at the high school but also at USC and Stanford University.  Over a 29-year period, Houck served as an offensive line coach for five different teams in the National Football League. During this time, he was part of the Dallas Cowboys championships in 1993 and 1995.

Mark McMillian, nicknamed “Mighty Mouse” for his small stature and tremendous leaping ability, is one of four players to be inducted into the college’s Hall of Fame who has had a playing career in the NFL.

McMillian was drafted in the tenth round by the Philadelphia Eagles and played for the team for three years. Overall, he played for four other teams in the NFL over a nine-year period, the New Orleans Saints, the Kansas City Chiefs, the San Francisco 49ers and the Washington Redskins. Athletic Director John Cicuto, who was also inducted that night, spoke of his former player.

“Mark McMillian was one of the best cornerbacks that we ever had at Glendale College,” said Cicuto. “His determination to succeed was second to none. In addition, I always use him as an example of what can be accomplished by hard work and desire.”

Cicuto was the last inductee to be honored. The former coach received the award for Outstanding Coach and received two standing ovations.

Cicuto coached his alma mater, Notre Dame High School, Pierce College, and was also the head coach at St. Bernard’s High School in Playa Del Rey. He arrived at Glendale College in 1975. Hired by his long-time friend and Vaqueros coach, Jim Sartoris, he was a defensive coordinator for the football team. Over the next 30 years, he and Sartoris worked together to develop a football program that is respected both at the state and the national level.

“No one has given more of their life to Glendale College’s student-athletes than John Cicuto over his 40 years at the college,” said Sartoris. “John was a tough coach, but a compassionate leader.”

Before becoming the head coach of the Vaquero team in 1989, he was the assistant coach for the Vaquero’s from 1975 to 1988. The team would win several conference championships. When he took over as head coach, he won almost 100 games, took his teams to five championship games, and won three.

“My greatest satisfaction as a coach is to have a student-athlete achieve success in the classroom and the field, earn their degree, transfer to a 4-year college or university, graduate and accomplish their dreams,” said Cicuto. “Our philosophy at Glendale College is to assist student-athletes in accomplishing their dreams.”