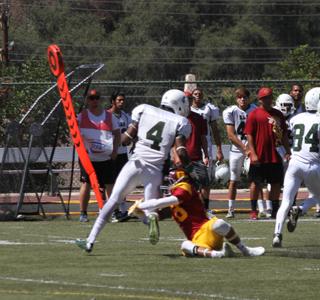 Despite a 4-0 winning streak, which has not been matched since the season of 1988, the college’s football team has remained humble and dedicated to reaching their full potential.

Although that winning streak came to an end on Oct. 4 against Santa Monica on Saturday, when the Vaqs lost 48-31, the team is still determined to  move forward.

“We just have to continue to practice and to improve,” said freshman running back Cory Watkins. “We just have to keep reminding ourselves that all of our hard work will play off in the end.”

After losing their shot at a championship title by just one game last year, the Vaqs are not settling until they have championship rings on their fingers.

“The hunger we have is best described by you thinking about how bad you want your dreams,” said tight-end Austin Walker. “That is the best way to look at it.”

With a team of returning sophomores who remember the raw feeling of having the championship title just out of their reach, the freshman teammates are influenced to play as if they were part of the defeat as well.

“I definitely feel like the sophomores are helping me a lot,” said freshman starter Payton Lowery-Sanders, “I think them pushing me, as a team, pushed me to become a starter.”

The coaches and players agree that competition between the sophomores and freshmen for a position has diminished, as they now focus on the betterment of the whole team and not just themselves as individual players.

“When the sophomores feel like their experience contributes to the success, even if it is a player in competition with them, to help their team play better shows their true character,” said head coach John Rome.

Character is the word Rome used to describe the team this season, as they care about one another collectively.

Watkins described the atmosphere the sophomores created as welcoming, which helped him and the other incoming freshmen get accustomed to the team.

“We are learning from them and getting better each day,” he said.

Watkins said that running back Marquise McGuire has been like a mentor to him. McGuire has really shown him the way. Without him he would not know the key plays and procedures.

Former head coach John Cicuto, who was on the football staff from 1975 to 2008 and is now the director of athletics, has been on the sidelines at the football games cheering on the Vaqueros. He sees this team as a very special one, as they are one that holds qualities of championship teams that he had coached years ago.

One moment that has stood out for Cicuto was at a game on Sept. 20 against San Bernardino.  The Vaqueros had a lead and almost gave it up after San Bernardino had three consecutive touchdowns, putting them ahead at 31-28.  After the defensive stop and the offensive line scoring, however, the Vaqueros took the win at 38-28.

“As a defensive [player] you have to make a stop and you can not let the ball go down, gaining yards for the opposing team who is on offensive, and they made that stop,” said Cicuto. “Then our offensive scored, which shows their character and to me that was the highlight of this team, so far,” he said.

The Vaqs motto is “win the down,” which translates to “one play at a time.” Each game they play is not viewed as being greater or less than the other.

“We have to take it slow, week by week,” said Walker. “Then we go down by down. The main thing is to win the down. It even says it on the back of our shirts.”

Cicuto recalls talking to Walker and tight-end Tanner Mays before the game, reminding them that they had a big game coming up.

“They both looked at me and said: ‘Coach, every game is a big game to us.’”

According to Rome, the team begins preparing weeks in advance. If the season is 11 weeks, they prepare for 41 weeks.

Even just 45 minutes after a game, Walker and his teammates watch tapes of their games to see how they can improve and receive texts from their coaches reminding them to hydrate and work on their game.

With a 4-1 record, the Vaqueros have five more games until season is over. According to the Southern California Football Association as of Sept. 29, Glendale College’s football team is ranked number 2 in the American Division right behind Victor Valley.

If the team can continue to improve as they have done throughout the semester, they will be able to make the standings to the National Junior College Athletics Associations Bowl Games, which is a championship game.

“We are looking at week by week, but I think we have the team and the squad to pull out something really special this season,” said Sanders.

After their first loss of season, their next game will be Oct. 18 against Antelope Valley.