Defensive Back Hangs up Opposing Receivers 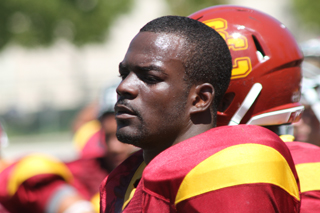 Dante Shipman has everything coaches look for in young, developing cornerbacks.

At 6 feet, 1 inch, and 180 pounds, he’s fast and efficient, with a graceful speed that allows him to stay on top of receivers defensively.

However, Shipman, 21, had to work hard to hone his athletic skills.

According to assistant football coach, Alex Rome, Shipman has progressed a great deal during his career at the college.

“He grew up right in front of me,” said Rome. “He came to Glendale in 2012 just wanting to play, but there was something missing from his game.”

As a result, Shipman was redshirted his freshman year, meaning his participation in games was delayed so that he could improve his skills both on the field and in the classroom. His coaches felt that he relied on his talent more than he did on hard work.

Shipman began training harder to turn that around.

“He got results and has become one of the best cornerbacks I’ve ever seen,” said Rome.

Shipman hails from a family that is heavily immersed in football. His cousin, Willie McGinest, played in the National Football League for 15 years. During 12 of those years, he played for the New England Patriots and was a part of the team’s Super Bowl wins in 2001, 2003 and 2004.

Shipman himself began playing football at a young age; however, he did not recognize his abilities as an athlete until he began playing travel, or youth, football.

“I was about 7 years old when I really got into football,” said Shipman. “I was getting interceptions and returning them for touchdowns, and I was knocking people over harder than the average 7-year-old. I was doing things on the field that other kids my age weren’t. That’s when I knew that I could be pretty good at this game.”

Despite his accomplishments, Shipman said that his career as a Vaquero is missing a championship.

“For this season, I want to be better than last year,” he said. “I want to get 10 interceptions as well as make all-state. But most of all, I want to win a championship. We were one win away last year.”

“It felt great to get a letter from the University of Georgia,” he said. “Just to have a school like that recognize my talent is something that’s really amazing.”

Glendale’s defensive coordinator Carver Russaw, who is in his first year coaching the Vaqueros, is working with Shipman to prepare him for university life.

“I’m really trying to stay on top of him about working hard to play at that level, even in practice,” said Russaw. “There will be athletes that will be good or as good as he is.”

With his well-trained eye, Russaw recognizes Shipman’s talent and wants to make sure he is prepared for the challenges ahead of him.

“His leaping ability and his ball skills are great,” said Russaw. “It’s something I haven’t seen in a player for a while. I’m doing a lot of similar workouts that I’ve done with the guys I trained who went to play in the NFL.”

Shipman’s teammate, Austyn Walker, said that Shipman has distinguished himself from other football athletes in a unique way.

For Walker, Shipman is more than just a teammate, as the entire team sees themselves as a band of brothers, or a wolf pack.

“We aren’t just friends, we’re family,” said Walker. “Out of all the friends that I have, Dante is one of those few guys that has my back no matter what…[he] is the best cornerback that I’ve played with throughout my career, as well as a great friend.”

Shipman has one more season to play before he transfers to Georgia. Although playing for the university is an accomplishment in itself, Shipman’s ultimate goal is to play for the NFL.

Russaw believes that Shipman has it in him to make it to the league. He even mentioned that University of Georgia’s defensive coordinator, Jeremy Pruitt, who’s won three national championships, also thinks that Shipman has the talent to make the NFL. At the end of the day, however, Russaw said that is all up to Shipman.

“If he wants to, he can make the league,” said Russaw. “I believe that he will make the league. However, the work that he puts in will determine the round that he goes into the draft, even if he will start or not, whether that’s in college or even the pros. I think he is dedicated enough to put in the necessary work to make him successful.”

“I think that if he works hard every day and keeps his nose clean, the sky’s the limit for him,” said Farwell. “He’s [very] smart and athletic and I believe that once he leaves California, that’s when this kid is really going to take off.”