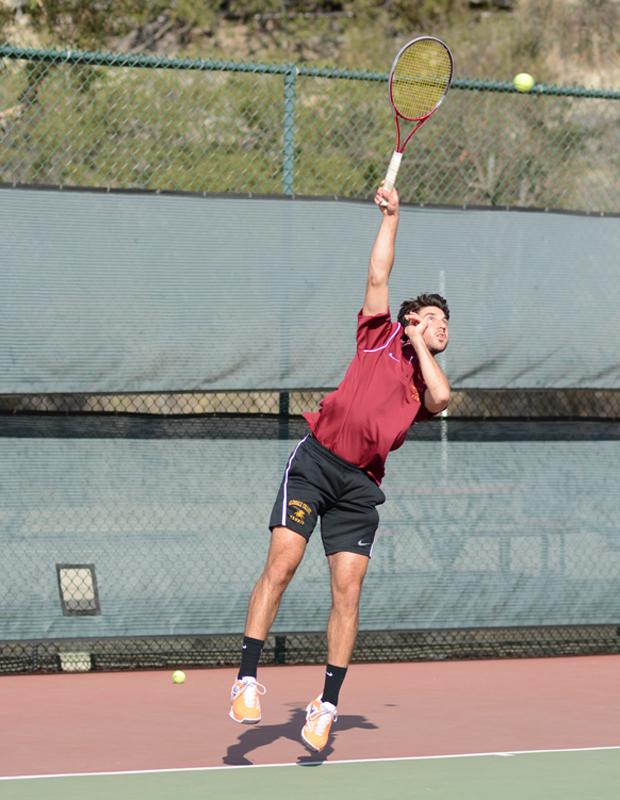 It’s been nine years since the Glendale College Vaqueros tennis team beat the undefeated conference champion Ventura College. One goal was set, to end the Pirates domination of the Western State Conference. The Vaqueros hit the mark with a 6-3 win, their first over Ventura since 2005.

“It seems like forever,” Coach Bob MacKay said. “To beat Ventura no matter what the story is was a good win for us today. Just for the sake of knowing that someone else is leading in the league and not Ventura.”

The battle between Vaqueros’ own Hosep Orojian and Ventura College’s Victor Mendes was a close one. The intensity in their eyes and the concentration level that these two players had, showed both were determined to come out of this match a winner.

Orojian, who lost in the first set in a tiebreaker 7-6 (0), fought his way through taking the second set winning 4-6. With his teammates cheering him on the sidelines and giving him words of encouragement, the third set was in play. Orojian was up 4-2, but fell short to Mendes, who came back to win the match 6-4.

Dat Le and Son Tran, the dynamic Vietnamese duo won their fifth point match with a score of 8-2. Having played in Vietnam together, Le and Tran’s chemistry helped them with their win.

Ventura has dominated the WSC for a long time. That ended when the Pirates lost their first conference match since 2006. “They are the best team in the conference and we know what we needed to do,” Le said.

Cameron Braun and Clayton Pauff would win 8-3 at number three in doubles giving the Vaqueros a triumphant victory over the Pirates.

“Doubles has been the key to us. So getting into doubles knowing we are up 4-2 was a big gain for us,” Coach MacKay said.

The Vaqueros are poised to win the conference title this year.

Going into Tuesday’s game Coach MacKay had a pep talk with his team about the importance of beating Ventura.

“I think the important thing is that Ventura has dominated and consequently I wanted to win this match today to let people know that Ventura can be beat. We got it,” Coach Mackay said.

Glendale will face off against Bakersfield on Tuesday at the Vaqueros Tennis Complex.