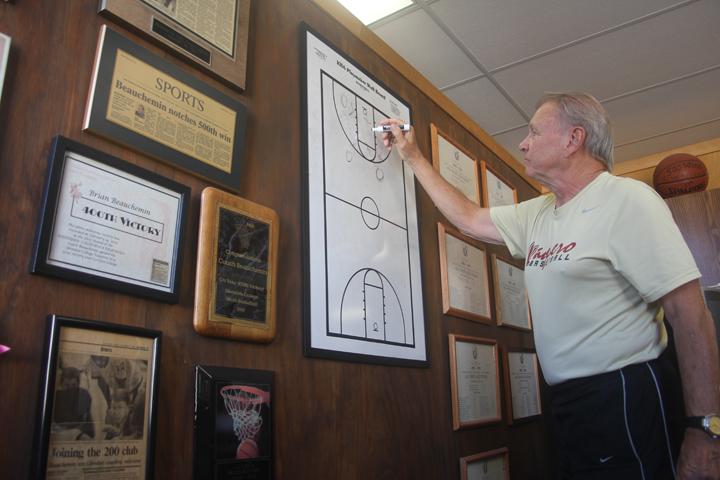 As Brian Beauchemin enters his 35th year coaching Vaqueros Men’s basketball the 2013-2014 season is going to be much different.

It’s not the nine new freshmen or a fresh newspaper cutout to join the many that decorate his office. It’s something more. Coach Beauchemin will be inducted into the California Community College Men’s Basketball Association Hall of Fame class in 2014.

After Beauchemin received a call from Steve Coccimiglio, the chairman for the Hall of Fame Committee, his first reaction pick the phone back up and call his wife Kathy.

“She started crying and, of course, I had to make believe I wasn’t emotional,” Beauchemin said.

Typically, you need to be retired from coaching to be inducted. After 53 years of coaching basketball, retirement has been a question for Beauchemin in the past.

“When [coaching] feels like a job, that’s when I’m not going to do it anymore,” he said.

Beauchemin added with a smile he would retire if the team went winless this season, radiating his keen sense of humor.

In 34 years as the Vaqueros’ head coach, Beauchemin racked up over 500 wins – the most by any coach in program history – and ranks sixth in wins among all coaches in California Men’s Community College basketball.

Sammy Darling is back in the lineup after a year off. Darling, a sophomore, was unable to play after a registration issue with the school last season. Darling played on Beauchemin’s team two years ago.

“I worked on my strength and endurance,” said Darling about his long offseason.

Other notable players include sophmore Emerson Castaneda. The wing guard averaged 10 points alongside Plavchyan as the leading scorers. Sophomore post/forward Nick Kahn has Beauchemin’s nod as most improved.

Darling said that the team’s goal is to win league and earn a trip to the state tournament.

With only four players returning from last year’s Vaqueros, GCC has to develop a team with only two months to spare. Glendale started practice at the beginning of the fall semester with 35 players versus the 13 on the current roster.

“I feel like this group has paid attention to detail,” said Beauchemin about the upcoming season.

The Vaqs officially begin conference play on Jan. 8 against West L.A. on the road. The Wildcats are in the same situation as the Glendale, with only two returners and nine new freshmen this upcoming season.

In regards to the Hall of Fame, coach said, “Coaches don’t make the hall of fame, teams, players and your support groups do.”