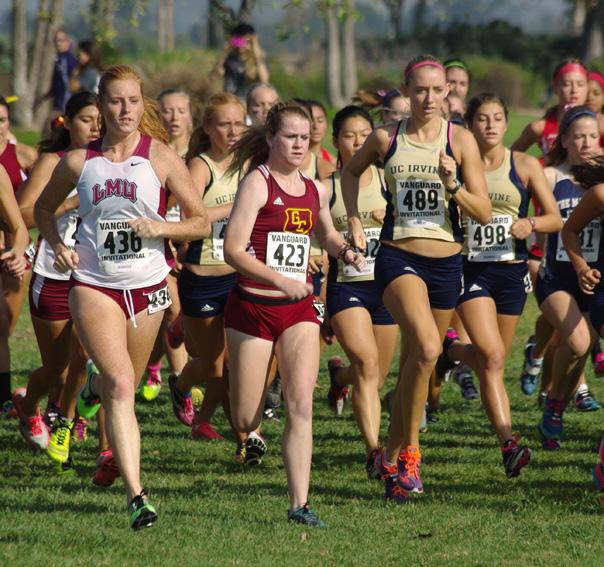 She runs cross country for a GCC team that is second in the state and has won the Western State Conference Athlete of the Week award two weeks in a row.

Elizabeth “Lizzy” Nelson, 19, sure is ahead of the pack.

Nelson stands 5 foot 5, with her blond hair up in ponytail and a ribbon blowing in the wind. She seemed ready, in uniform, to get up and run.

“I need to be patient and just keep working hard,” Nelson said with some of her books in hand.

Nelson said she hopes to “transfer” on and pursue a scholarship after this track season. She enjoys her astronomy and sociology classes, but still isn’t sure what her major will be.

Nelson is in her second year on the Lady Vaqueros cross country team. She is the sophomore captain and, besides nabbing the athlete of the week award twice, she was nominated for the California Community College Athletic Association’s Athlete of the Month.

“It’s so unexpected,” said Nelson with one hand over the other on her lap. “My life isn’t that interesting.”

Nelson blew away the competition at the the Golden West Invitational on Sept. 27, finishing first with a time of 18:28, nearly a full minute in front of the pack in the individual competition.

At the Mustang Challenge on Sept. 21 she bested the competition by 36 seconds to take first.

Nelson has some large shoes to fill. GCC alumni Grace Graham-Zamudio took the team to a state title in 2011 and made the All Western State Conference team.

“She was an amazing person to run with.”

“You could see it in her eyes,” he said. “She’s focused,” Serrano said about Nelson.

Serrano and Nelson are both in their second year. They not only run together, but they are good friends.

“Our relationship transcends that of teammates,” he said. “We respect each other’s ability.”

Both the men’s and women’s teams are ranked in the top five in California. Glendale is the only school in the state to accomplish that. The Lady Vaqs team is ranked a close second behind Orange Coast.

Family is a recurring theme in the cross country department.

Nelson’s older brother, Alec Nelson, attends Humboldt State and runs cross country.  A GCC alumni, he competed here for two seasons. Her half sister ran for the Lady Vaqueros and now lives in North Carolina. Her father, Jeff, is also a GCC alumni and ran cross country as well.

Nelson’s mother Kathryn attended College of the Canyons, a rival of the Lady Vaqueros, and is now one of the assistant cross country coaches at GCC. Coach Nelson admits she can be tough on her daughter.

“My biggest flaw is I cannot take the coach hat off when I need to,” she said. “The balance is tough.”

Nelson said they still enjoy watching TV together, and watch cross country at home. She said she really doesn’t have any time do anything else.

“She works harder than almost everybody,” said Coach Nelson.

Head Coach Eddie Lopez is close to the Nelson family. Nelson’s father and Lopez’s younger brother, Joe, ran together at GCC in 1981.

“We’ve known each other for years,” Coach Nelson said.

She was recruited by Lopez after her stint at Saugus High School in Santa Clarita.

Nelson was emphatic that she receives the same treatment as her peers, sometimes even tougher. This causes them to butt heads from time to time.

“I can’t favor her,” Coach Nelson said. Her mom has to be the toughest on her, the younger Nelson said.

That toughness seems to be working. Lady Vaqueros cross country has won state titles in 2007, 2009, and 2011. In Western State Conference competition, GCC has captured a conference title every year since 2005.

Watch Nelson go for it all at the WSC finals later this month.