Lady Vaqueros Take One in the Loss Column 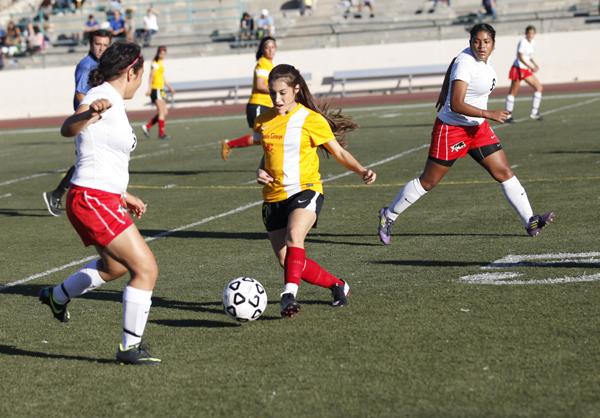 The Lady Vaqueros suffered their first loss of the season, 0-3 against Pierce College last Friday at Sartoris Field.

GCC came out strong against the Brahmas, however Pierce dominated the ball the first five minutes. A lack of rhythm was apparent in the Lady Vaqueros. The Brahmas out hustled GCC to the ball for most of the match.

Head Coach Jorge Mena for the Vaqueros had this to say about the energy level.

“We just didn’t play with the urgency of competing,” he said. “We just ran flat.”

The first 15 minutes of the match were all Brahmas.

Jacqueline Hilario of Pierce scored a quick cutback to pass a GCC defender and fly right past the Lady Vaqs goalie at the 23rd minute. GCC went into the half down by one goal.

In the opening minute of the second half, freshman defender Delia Pineda went down with a knee injury.

Athletic Trainer Claudia Alvarez, along with the rest of the training staff, rushed out onto the field. Pineda was not able to walk off under her own power, while the rest of her team looked on.

GCC went down two more goals in the second half. Brahmas forward Shawnie Moore delivered a forward pass into the box to forward Michelle Somers at the 51st minute.

The 61st minute featured a floating goal by Brahmas midfielder Claudia Rosas that tipped off the GCC goalkeepers hands and trickled into the back of the net.

GCC forward Monet Estrada was able to make a push and put pressure on the Brahmas defense at the 80th minute. Estrada’s shot grazed the Brahmas goalkeepers hands and deflected out of bounds.

Ultimately, it was not enough to push GCC past Pierce. The lack of energy was apparent throughout the match.

“The whole team is sick,” Estrada said. There were some points where the Lady Vaqs looked to push. “We still put in effort,” she said.

GCC played in the conference opener at Citrus College Tuesday evening where they tied 0-o.