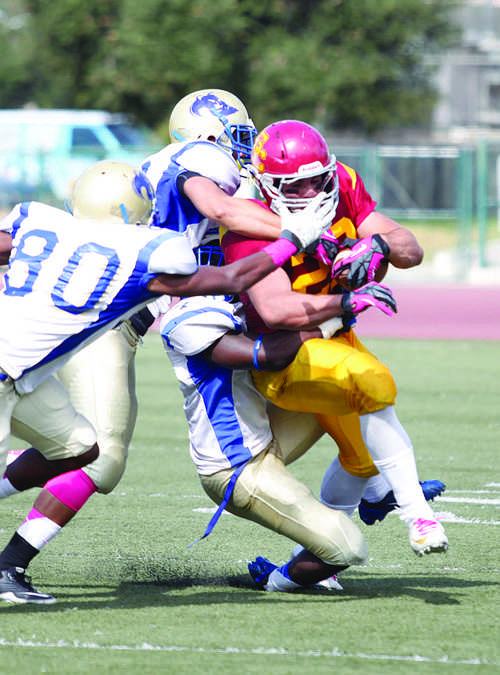 Glendale played its first day game in Sartoris field’s history, but after a 41-6 beating on Saturday the Vaqs needed a dark place to hide their heads.

Quarterback Nick Blackmon continued his streak of subpar performances by only completing 11 passes for 88 yards and threw two interceptions, one of which was returned for a 96-yard touchdown.

When he wasn’t missing his wide open targets, he tossed dump passes to his star running back Collin Keoshian, who did his best to turn broken plays into positive yards but the heavy load wore him down by halftime.

Blackmon has thrown seven interceptions this season and only five touchdowns.

Meanwhile, opposing quarterback Dallas Lopez had a field day. He passed for 228 yards with one touchdown in the air and one on the ground.

However, both starting Glendale corners were out with injuries but should be healthy for their next game.

Kicker Helio Guerra continues to struggle, which forces the team to go for unnecessary fourth down conversions. Glendale was one for four on fourth downs and attempted no field goals. Guerra missed his only extra point attempt and his leg is so unreliable, kickoff duties are handled by Keoshian.

In the fourth quarter, the score was so lopsided that backup quarterback Ki Bae was given a few snaps. He went 3-6 with 24 yards and a touchdown on a 16-yard rush. He scored Glendale’s only points and might have earned himself a start in the near future.

“I wanted to make a statement,” said Bae.

Rome liked what he saw out from the backup, and it was a refreshing change of pace for the offense.

“I saw a faster rate of play,” said Rome.

The Vaqueros next game is at L.A. Southwest College on Saturday.

Glendale is on a three game slide and will have to turn their play around immediately if they want to have a winning record, but coach Rome is staying positive.

“I guarantee we’ll come back stronger. Our strategy is to not play like this again.”