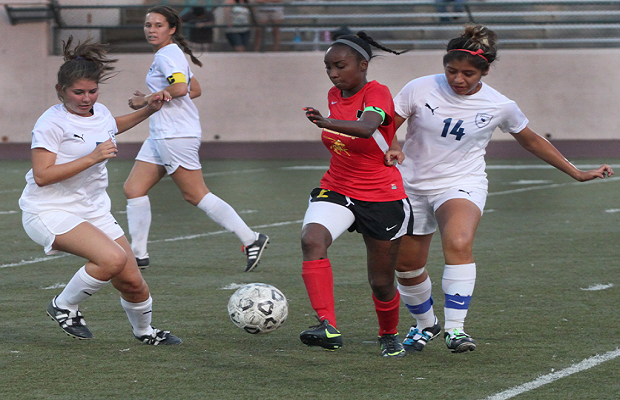 Glendale Community College Women’s soccer was handicapped by injuries to three starters in their 3-2 loss against Irvine Valley College at their home field on Sep. 14.

GCC held the lead the entire first half of the game with 2 goals by Whitneigh Braxton. Irvine came back with a different line-up second half and caught up with GCC in the last 15 minutes. GCC was able to hold them off until they made the third goal in the last five minutes.

“It’s frustrating when 3 of your starters are on the bench,” said coach Mena after the game. The three starters missing from Mena’s 4-4-2 line up are Judith Estrada (sweeper), Gugi Jallow (center midfielder) and Valerie Encino (midfielder). Hopefully they will recover soon to help their team get out of their current 1-4 streak.

On the right wing GCC had Ashley Acevedo who ran her line with smart off-the-ball movement and consistently connected passes with precision. Sheila Araji played the left wing pressuring every ball, always getting back to help the defense and was never out of position. GCC’s defense did a good job keeping the ball on Irvine’s half of the field during first half.

GCC’s lead scorer, Braxton, is a force to be reckoned with. She was faster and had better ball control than Irvine’s defense during the first half, and the girl could finish. Braxton was able to score goals despite the fact that Irvine had more offensive opportunities.

Some problems that GCC had was their inability to control the center of the field as well as trapping and settling the ball. GCC as well as Irvine had a bad first touch on the ball, where it made it more difficult for players to control the ball especially under pressure.

When Irvine changed their lineup for the second half it was an entirely different team. Irvine substituted their center midfielder who controlled the field and was the playmaker, and their sweeper did a sufficient job of preventing Braxton from receiving the ball.

Despite Irvine’s changes it was a close game. Braxton made one more threatening run nearly scoring a third goal but was stopped by an amazing save from Irvine’s goalie. GCC girls persevered until the final whistle.

“All I can ask is that they try, and give me 110 percent,” said coach Jorge Mena. He recognized the girls effort and admired their relentless spirit, they never quit.