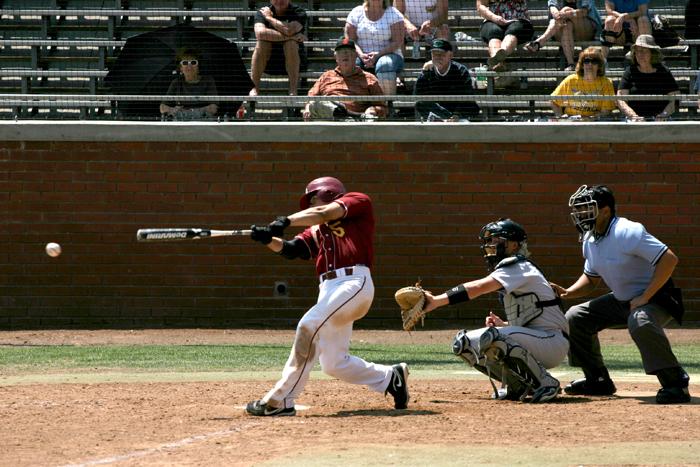 Nothing says baseball like a hot humid day in May and the only thing hotter than the weather was the Vaquero baseball team.

The Glendale Vaqueros swept the San Diego Mesa Olympians 2-0 in their playoff series on Saturday and Sunday. Head Coach Chris Cicuto was ecstatic with the team’s pitching and offensive production.

“Our batters are very disciplined and we had kept having quality at bats,” said Cicuto.

Game one was a pitching duel with both starting pitchers only allowing one run apiece. The final score was 5-3 with 80 percent of the runs scored in extra innings.

The Vaqs had no problem getting hits, but they failed to drive in any runs going 0 for 12 with runners on scoring position.

Starting Pitcher Cory Popham kept GCC in the game allowing one run on three hits and striking out eight through 8 2/3 innings pitched.

“I had a great defense play behind me and I was able to throw strikes and stay ahead of the count,” said Popham. “We all do our part and we all contribute. I was pleased we were able to get the win.”

The Olympians drew first-blood, scoring in the sixth inning. They could have taken a demanding lead if not for a diving catch by Chris Stroh that ended the inning and left two Mesa runners stranded in scoring position.

Stroh followed his spectacular catch with a home run in the seventh inning to tie the game up at 1-1.“I had issues with my wrist and I took care of it,” said Stroh. “ I went back to how I was playing earlier in the season. It’s funny how small adjustments can turn into huge changes.”

The drama unfolded in the ninth inning, with runners on third and first with one out. Cicuto instructed the team to go for a squeeze bunt and the play turned into a double play that ended the inning.

The Vaqueros had their backs against the wall. They loaded the bases for Jarrard Julian.

Julian, who hasn’t hit a home run the entire season, took his at bat and ended the game in an epic fashion. He hit a walk-off grand slam to end the game and give the Vaqueros a 1-0 lead in the series.

“We have made it a habit to fall behind and make comebacks all season long,” said Julian. “I am just happy I was able to help our team get the win.”

Winning the game in a walk-off grand slam demoralized Mesa College and infused the Vaqueros with confidence in the series.

“It’s always tough to lose but to lose off a walk-off is really hard. I am happy for Julian and our team,” said Stroh. “ It gave us confidence and momentum in the series.”

If the Vaqueros won this game, they would win the series. A loss would mean that they would be forced to play a double-header. With Meza needing two games to win the series, they came out ready to play. Their morale was soon crushed as the Vaqueros scored five runs in the second inning and added another in the third.

The Vaqueros won game two, shutting out the Olympians 6-0.

“Mentally, we took them out of the game early on. They were done after the third inning,” said Gonzales. “I threw strikes and kept them unbalanced and I didn’t allow them to square up.”

Mesa played desperately after giving up runs early in the game: runners were caught stealing bases and batters tried to extend hits and were caught.

“It’s demoralizing to take that long drive from San Diego to Glendale and lose the way they did,” said Stroh. “It’s going to be an even longer drive back to San Diego.”

The Vaqueros’ kryptonite is scoring runs, while their strong suit has always been not allowing any.

Once the bats came alive and the runs starting piling up, the Vaqueros were ready to bust out the brooms and prepare to advance to the Super Regionals.

“Our pitching has always been lights out, when the bats come alive we are truly hard to beat,” said Popham.