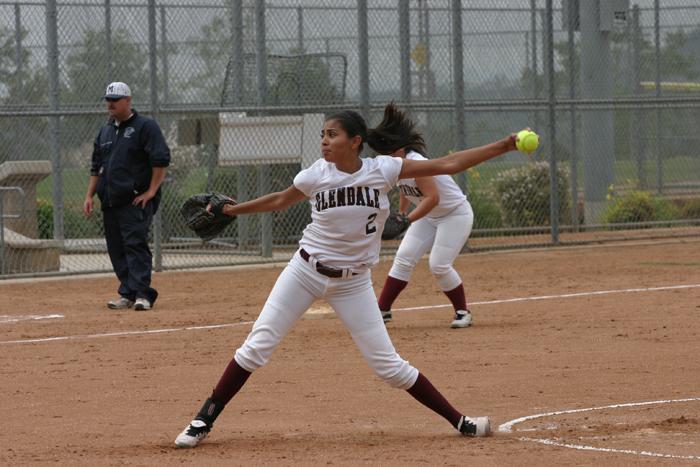 She led the conference in strikeouts, now she’s leading her team into the post-season.

Brandy Morin’s frame is small, but her long arms give her an intimidating, roundhouse delivery, accompanied by a deep grunt that leaves batters paralyzed.

“She’s had about the best performance of anybody that’s ever pitched here,” said coach Dave “Hawk” Wilder.

Morin is the first softball pitcher in the history of Glendale College to have a 20-win season, and her championship caliber skills will be needed as the school seeks its first state title.

“I’m nervous, I’m always nervous, but once I throw my first pitch I’m good,” said Morin, who finds confidence through her teammates, and takes the mound every game with a “try to beat us” mentality.

Morin’s teammates describe her as sweet, goofy, and a positive influence.

“It’s been an honor catching for her, she’s one of the best pitchers I’ve ever caught,” said Jena Kaser.

Morin, 19, started pitching when she was 8-years-old, but admits that it didn’t always come naturally.

“I wasn’t good at all until about my third year playing,” said Morin.

Her speed and ability to hit the ball originally landed her in the outfield as a kid, and it still shows as she boasted a .432 batting average and 11 steals on the season. However, motivated by her father and the advantage of being left-handed, Morin decided to challenge herself and learn how to pitch.

Despite her impressive performance this year, her career at Glendale seems to be a tale of two seasons. Morin was beaten out for the starting job last year by former sophomore Jennifer Meza.

“She wasn’t ready last season,” said Wilder. “She was not mentally ready to play, and she did a 360-degree turnaround to become not just a good pitcher, but a major pitcher.”

“I looked back on what I was doing, and was like ‘that’s not me,’ … I just pushed myself to get back in it again,” said Morin.

“Once I knew she was the ace for this year, I knew we could go all the way,” said Pinedo.

Coach Wilder and Morin attributes much of her success this season to her rise-ball, which is a pitch unique to softball that starts off in the strike zone, and then rises out of the zone last second.

“Her rise-ball is her best pitch, it saved her,” said Wilder, who also likes her changeup and backdoor curve. “She throws hard, she has great movement on her ball, and she hits her spots, that’s what makes her so good.”

Her coaches and teammates aren’t the only ones to notice Morin’s incredible play, as many universities are actively scouting her.

Morin and Pinedo, who have played together since high school, would both like to play for Chaminade in Honolulu, Hawaii, however Morin is also considering staying close to home, so she can still visit her family.

Morin dreams to one day play for the U.S. national team like her idol Cat Osterman, who is left-handed and has a similar grunt.

It will be very difficult for coach Wilder to see Morin transfer after her spectacular season.

“I’d want her as a daughter, that’s how good she is. She’s a great kid,” said Wilder.