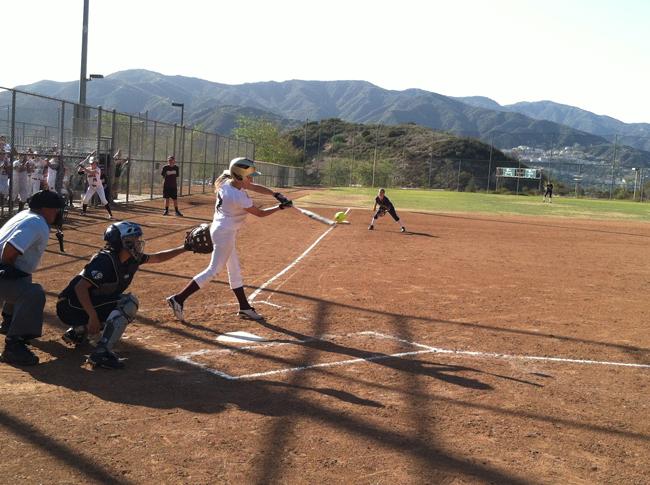 Numbers can be cruel.

The Lady Vaqs held College of the Canyons to only five hits Thursday, but managed to lose their first conference game of the season 7-6 at home.

“They were tough, but we’ll take ’em in the next two … we’re just as good as they are.” said outfielder Carley Zabka.

Glendale’s defense made two costly mistakes to start the game, first walking lead-off hitter Ruby Herrera and then allowing her to score on a throwing error, giving Canyon an early 1-0 lead.

Zabka got the Vaqs going in the second with a lead-off double to left field, and later scored when Adrienne Lozano crushed the ball up the middle for an RBI triple. A fielding error allowed Lozano to reach home and the Vaqs took a 2-1 lead.

In the top of the third pitcher Brandy Morin beamed Jenny Wunderlich in the forearm, awarding her first base and igniting a two-run Canyon rally, fueled by Nikki Haslock’s inside the park home run.

Once again, Zabka kept her team in the game by leading off with a hit in the bottom of the fourth and put another run on the board due to a Canyon fielding error, making the score 4-3.

Another lead-off walk and hit batter allowed the Cougars to tally-up two more runs on a sacrifice fly by Adriana Correa, and Canyon took a 6-3 lead.

The top of Glendale’s lineup came back around in the bottom of the fifth, and the Vaqs pulled together a spectacular rally.

Nancy Pinedo and Morin both executed perfect slap bunt singles, followed by a 2 RBI blooper up the middle by Kitty Nguyen. Another Canyon throwing error allowed Nguyen to score, and the game was tied.

The seventh and final inning was a heart breaker for Glendale.

Andrea Brackpool ledoff with a triple to dead center and despite GCC’s best defensive efforts the Cougars were eventually able to hit a sacrifice fly and take a 7-6 lead.

The Vaqs had one last shot in the bottom of the seventh, when Pinedo ledoff with a slap-bunt base-hit. Morin attempted to follow with a slap-bunt of her own, however the umpire called Morin out for stepping outside the box while attempting the bunt, killing Glendale’s momentum and the game ended 7-6 with the tying run stranded at first.

“She was not out of the box,” said coach Dave Wilder. “That just kills a huge rally when you have your second, third and fourth hitters coming up, and that takes you out of the game.”

College of the Canyons remained undefeated throughout the preseason and is the team to beat in the Western State Blue conference. The Cougars will have home field advantage against the Vaqs for the remainder of the season, which will make gaining ground in the standings especially difficult.

The Lady Vaqs’ next home game is against Bakersfield College on Thursday at 2:30 p.m