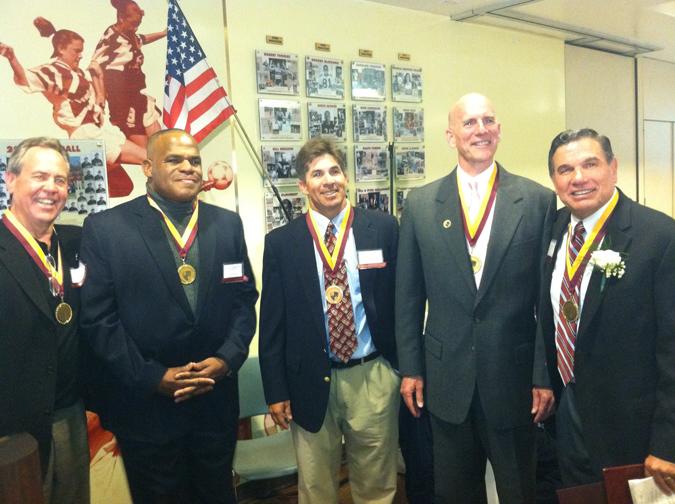 Friends and family gathered Saturday evening at the J. Walter Smith Student Center to see their loved ones get inducted to the 11th Annual Glendale College Athletic Hall of Fame.

Dozens of people attended the special evening, to see the newest inductees receive their prestigious awards.

Tove Berg, from Sweden, received the award for outstanding athletic achievement. Berg was a member of the 2007 track and field team, winning numerous awards while attending Glendale College.

“I am very happy and very honored for this award,” said Berg via webcam. “I want to say thank you to my coach for seeing potential in me. I wouldn’t be here without him, I wouldn’t have achieved my goals.”
Berg could not accept the award in person because she had moved back to Sweden.

The award for outstanding team was given to the 2002 men’s baseball team. The team set a school record in the Western State Conference that year, 20-6. Also, head coach Jon Strauss was named coach of the year, pitcher Jon Felfoldi was co-player of the year and 13 players were named to the WSC team. Pitcher Macro Estrada now plays for the Milwaukee Brewers.

“I want to thank my 2001 team, they set the tone for this team,” said Strauss. “The 2002 team: I worked you hard, I demanded a lot out of you, I was hard on you. The thing that I’m most proud of is every sophomore moves on to the upper level and that’s always been my goal.”

The next inductee was Chet Williams, who received the meritorious service award. Williams played Linebacker for the Vaqueros in 1979. He was First-Team All-WSC, then transferred to Washington State University.

He is a classroom instructor at Sylmar Juvenile Hall and Optimist Youth home for boys. He is a mentor to Glendale College students and is the founding president of the GCC Alumni Football group.
“It’s not about the All-Star player, but it’s about the teammates that we played,” Williams said. “I must thank the people in my life… for their guidance and their patience.”

After Williams received his award, Dale Logie was inducted for outstanding athletic achievement. Logie played football for the Vaqueros from 1972 to 1973. He was a two-time All-WSC when he played, as well as a member of the All-America team in 1972.

Logie transferred to USC and was a member of the 1974 National Championship team. He has coached at GCC and Flintridge Prep in La Canada, where he is currently the athletic director.

“Coming to tonight’s event is very special. There are a lot of people that I have to be thankful for,” said Logie. “College, the Hall of Fame staff, Alex Leon and his staff. Coaches, friends, teammates and my family. I love you all.”

The award for pillar of achievement was given to Col. James D. McGinley, who played as goalie for the Vaqueros’ water polo team from 1977-1979 and was MVP.

He has a 30-year career with the U.S. Marines and received a Bronze Star for his service in Iraq, as well as a Legion of Merit for leadership in the combat zone.

“This medal means just as much to me as any other medal I have,” said McGinley. “It is indeed an extraordinary honor. It is wonderful to be remembered after all these years. Glendale College has always been a very special place in my heart.”

The final award of the evening was given to Coach Jim Sartoris. He was inducted as outstanding coach.
Sartoris played quarterback and defensive-back for the Vaqueros in 1962 and 1963. He was a member of the 1963 All-American team. He received an athletic scholarship to the University of Washington.

Sartoris had a 40-year career at Glendale as an assistant head coach, head coach and athletic director.

“Thank you so much. I want to congratulate all the other inductees tonight,” said Sartoris. “This Hall of Fame is the best thing that Glendale College has done, as far as bringing people back on campus and seeing old faces that you haven’t seen in a long time. I know why I’m here, and it’s because of you guys, particularly everyone in this room.”

For more information on the GCC Athletic Hall of Fame visit, www.glendale.edu/index.aspx?page=320.