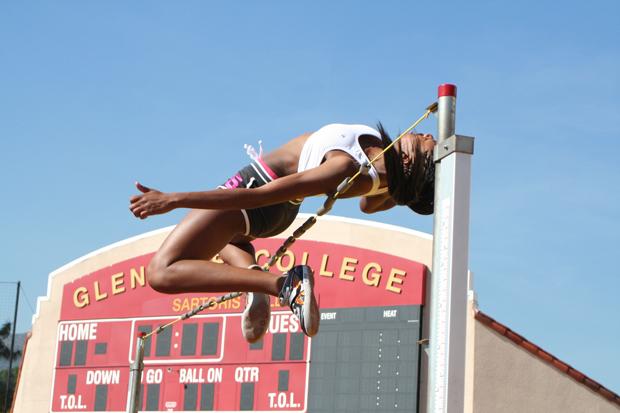 The men’s and women’s track teams will rely heavily on their depth in middle and long distance running to push them into state, where coach Eddie Lopez feels the team has its best chance at scoring points.

“We have athletes that can beat state champions,” said Lopez.

The women’s team is particularly strong in distance due to their sophomores Angela Martinez and All-American Cecilia Nicolas. Captain and All-American Alissa Asserian is also expected to score big points for the Lady Vaqs in the 1500 and the 5k races.

The men’s team may get a slow start due to their co-captains Rico Gutierrez (knee) and Arthur Papazyan (hamstring) dealing with minor lingering injuries which may keep them out for a few meets. However Lopez feels they should be healthy for the major meets which are at the end of the season.

The Vaqueros weak point this season will be the field events, however freshman high jumper Justice Shank is expected to grab GCC some much needed points this year.

This year’s expectations are to win the league, according to head coach Greg Osbourne.

Michael Timpson, who is returning from an all-region and all conference season last year has been chosen as the team captain.

“We have an opportunity to be the best team in the state,” said Osbourne.

However, with four returning players red shirting this year, the lower ranked players on the team will have to step-up their game to keep them in the running.

The Vaqueros next match is Sunday and Monday against Santa Barbara.

Last year men’s tennis had the number one ranked player in the nation, Alex Sarkissian, who has recently transferred to Pepperdine University.

“It definitely affects us … but I still feel our team is strong,” said Campbell about the loss of Sarkissian.

The team won its league opener at home against Bakersfield college 8-1 and the next home game will be on March 13 against Pima Community College from Arizona.

“This is the best team I’ve ever had,” said softball coach Dave Wilder.

This year’s softball team started on a high note, winning the Glendale College Tournament for the first time in seven years.

The Vaqs are currently ranked 13th in California and their first regular season game is on March 8, against College of the Canyons.

On Saturday, they mercy-ruled L.A. Harbor College 8-0, in a brilliant performance by pitcher Brandy Morin who pitched a five-inning, one hit shutout while striking out four.

“She’s probably one of the two best pitchers that Glendale’s ever had … we know when she’s on the mound, if we don’t make mistakes we usually win,” said Wilder.

The women’s tennis one, two, and three players are all ranked in the top 10 in California.

However in a sport where every player is counted on for wins, team depth may be more important than individual skill.

“There’s only about 65 or 70 [California community colleges] that play tennis … because the numbers are so low in a sport like tennis, a lot of schools have lost their programs,” said coach Bob Donaghy.

“There’s a term in cooking called reduction where if you want to intensify the flavor of something, you put it on the simmer for a couple of hours … so it’s less volume but what’s left is more intensely flavored … and that’s what’s happened to community college tennis,” said Donaghy. “There are fewer schools but as soon as a program folds down at one, those players go to another school, so you’re looking at some pretty deep teams.”

Unless the back end of their team can progress it may be a tough season for a team with very talented players.

Losing 22 players from the previous year is tough following a championship season, but head coach Chris Cicuto is confident in his freshmen players.

Returning sophomore Chris Stroh has moved from ninth in the lineup to the lead-off hitter and is now tied for most stolen bases in Southern California with 12.

The Vaqueros are currently sitting in third place in nonconfrence play at 7-4.

Their next game will be against L.A. Valley College at Stengal Field on Tuesday at 2 p.m.