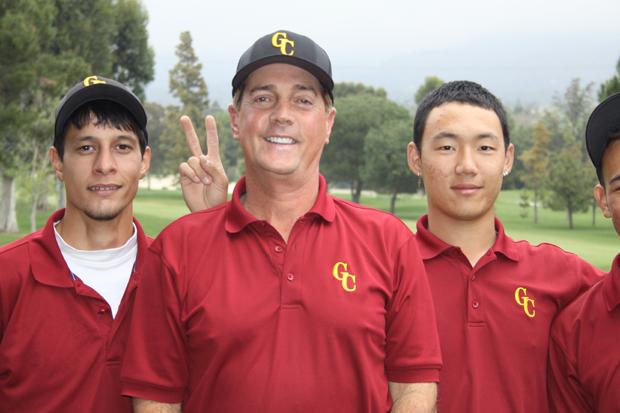 Another season is upon the Glendale College men’s golf team, and this year it hopes for continued success with high expectations and goals.

Last year the Vaqueros finished at the top of the conference and regional. The team placed second in both the Western State Conference and the Southern California Regional.

However, the team finished seventh in the Southern California Regional, ranking the team third in the final state standings.

Head coach Greg Osbourne wants the same success for his team this year with the same goal in mind: winning a state title.

“Expectations are to win the league, place first or second in the regional, go to state and make a run at a state championship. Those are our expectations this year,” said Osbourne.

Osbourne is confident about his team, but they are also a young team.

“We have 13 of the best players in the area, but only six can play,” said Osbourne.

Quintanilla was MVP of the team two years ago, and he red shirted last year.

Another standout on this year’s team is Ricard Maloof. The freshman played at St. Francis High School and he was a member of the Pasadena Star News All-Area team.

Despite the fact that this year’s team is young, Quintanilla is confident that inexperience means nothing on the golf course.

“I think golf is such an individual game that it isn’t about college level competing experience, but its about experience in general,” said Quintanilla. “A lot of our guys have played in tournaments outside of Glendale and that’s giving them the experience that they need.”

Both Quintanilla and Timpson have the same goal in mind: victory.

“I want to win state as a team and individually,” said Timpson. “I’ve been working with coach, and he has helped with my pre-shot routine and the fundamentals of golf. So I can achieve my goals of winning state,” said Timpson.

The team’s first goal of course is to make sure that their grades are good. Osbourne imposes to the members to maintain their grades.

“We stay in school get the best grade point average and move on to a four-year,” said Osbourne.
The men started the season off strong, first at the Orange Empire Tee Off Classic, a two-day tournament in Los Serranos.

However they placed fifth in their conference opener at College of the Canyons on Feb. 6 and fourth at Santa Barbara City College on Feb. 13.

“Right now I feel that we should be tied for first but we’re in third,” said Osbourne “We have to keep on proving ourselves.”

On Sunday the Vaqueros travel to La Purisma Community College for a two-day tournament against Santa Barbra Pt. Conception.