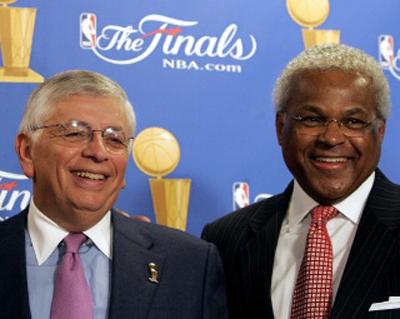 After negotiations failed, the outlook for the coming NBA season looks bleak. With no NBA season, what can we do? Where will we turn for entertainment during winter? What will happen to the fans and the businesses surrounding these teams areas?

On Nov. 15, the National Basketball Players Association and team owners still have not agreed on a deal splitting NBA related income. In four months, they will be looking toward the Supreme Court to settle their differences.

Because they are selfish.

The owners want more money for themselves, and the players want some of that revenue. Neither side is going to give in, and with that, we — the fans — are out of luck for a season in 2011-12.

With all this drama surrounding the players and the owners, no one looks at the most important thing: the fans.

We are the ones that sit in these multimillion dollar arenas and spend hundreds on tickets. The fans are the reason why the NBA generated all the money in the first place. The owners are taking our hard-earned money like if they were taking candy from a baby.

Watching professional basketball games is entertainment for us. Cities such as Los Angeles (where there are two NBA teams) are affected because L.A. does not have an NFL team of its own.

Living in basketball cities, what are we supposed to do when the NFL season is over? Normally we are used to watching the Lakers play on Christmas morning, but with the looks of the lockout that isn’t going to happen.

Business surrounding these franchises, like restaurants and sports bars, generate most of their money during the season. These businesses will suffer dramatically because no one will be coming down to the arenas. Anything and everything that involves basketball in some way is affected by this lockout.

Sean Condon, owner of Buzzer Beater Sports in Hermosa Beach, has said that business has suffered the consequences of the lockout.

“With football here we haven’t felt the sting yet, but when January comes that’s when we will feel the sting in business,” said Condon. “I blame both sides for the lock out.” Condon is optimistic that there will be a season this year.

Condon sells sports apparel and memorabilia at Buzzer Beater. Hats, jerseys, and picture frames are some of the things that you can find at the restaurant. But with no season Buzzer Beater faces lack of sales and struggles to provide a product.

The NBA lockout has now reached over 140 days and all games have been cancelled through Dec. 15.

That’s 324 games in total that have been cancelled. That equals to 26 percent of the season.

So who’s to blame for no basketball this year?

At first you want to blame NBA commissioner David Stern and the owners because all they want is more money for themselves.

But in retrospect, we are pointing our fingers to Billy Hunter, Executive Director of the Players Association. We should also look at Derek Fisher, current Los Angeles Lakers point guard and NBPA President.

Stern’s latest offer to the players of a 50/50 split of basketball revenue to the NBPA, which was rejected, was the best offer they received.

Hunter and Fisher probably think they can get a better offer from Stern, but they are wrong. They should have taken that offer, closed the book on the deal and started the season.

But no, they are being greedy.

A 72-game season is better then a 50-game or a no season. Going to court is not the right way to solve this.

Now that lawsuits are being filed, its going to take even longer for a deal to be made.