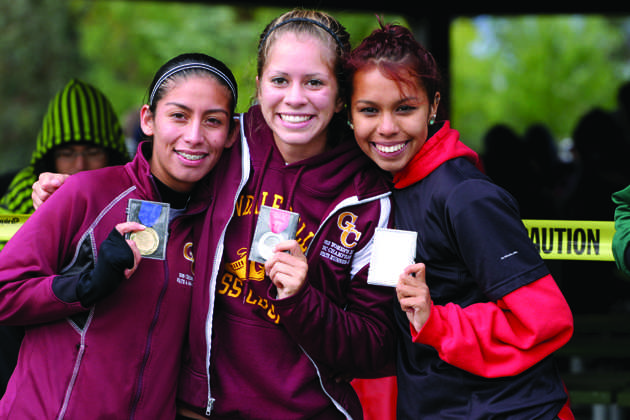 The Lady Vaqueros were unfazed by frosty winds and pouring rain as the team won first place in the Southern California Cross Country Championships at Guasti Regional Park in Ontario on Friday.

“They absolutely dominated,” said Head Coach Eddie Lopez. “After the first 400 meters, our team took over.”

“Our top three were great,” said Lopez. “I’ve never had a team with runners finishing in first, second and third place. Karen even went the wrong way for a brief moment but she ran so fast it didn’t matter.”

“I had a bad race,” said Mendez, 18. “I run well on flat courses like the one today but I didn’t have it in me today. I was chasing the runners in the lead but they got away from me.”

The rainy weather proved to be an obstacle as well as a welcome challenge.

“I thought running in the rain was fun,” said Nelson, 18. “There were a lot of guys slipping because of the mud in the first mile. I loved it.”

“The weather got really crazy,” said Rosas, 20, sociology. “When it seemed like it was going to stop, it got worse.”

The next challenges for the Vaqueros are the state championships in Fresno.

“The women’s team has to stay healthy and continue their preparation and they are going to try to break the team’s total time record,” said Lopez. “The men’s team is going to be facing tough competition but they are up to the challenge.”

“Today’s loss for the men’s team was a wake up call for us,” said Nelson. “We are going to bounce back from it and be ready for the championship race.”

The State Championships will take place in Woodward Park in Fresno at 10 a.m. on Nov. 19.