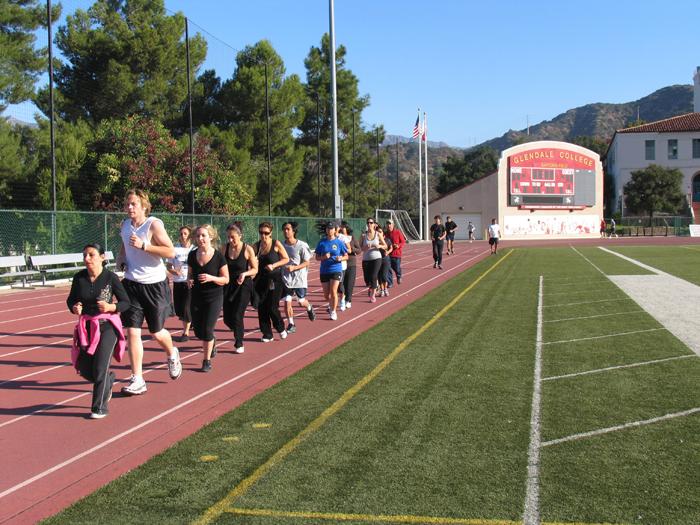 The five S’s of sports training are: stamina, speed, strength, skill, and spirit, but in Eddie Lopez’s running aerobics class, the greatest of these is spirit.

Lopez teaches three running aerobics classes and is also the coach of Glendale College’s cross country team and track and field for both men and women. He said his running classes have a strong sense of team unity and there is a lot of friendship between students.

“I train them like I do my cross country team,” said Lopez, who is starting his 7th year as head coach for track and field. He was assistant coach for 18 years prior to that.

The purpose of the class is to work toward getting into better shape. It is an introduction to running aerobics as a lifetime activity. There is no prerequisite and all students come from different walks of life.

One of the runners in Lopez’s class is David Karapetyan, a history major, who has enjoyed running and playing soccer since he was 4.

He is nicknamed the “Terminator” because he destroys his competition on the track. This is the third time he has taken the class, which he attends Mondays through Thursdays. He said it improves his physical conditioning and relieves stress.

“It’s too easy for me on a treadmill,” said Karapetyan. “I’m trying to get better and maybe join the track team.”

Lopez encourages his best runners to try out for track and field. But others in the class are just looking for a good workout.

Karapetyan said he likes the running class because sometimes they run in courses that are off-campus.

One of the courses is called the church loop, which has the class run a two mile course off to a church and back. Lopez said he has to watch out for cars and dogs along the way and said that safety is very important.

Another runner in the class is Peter Karamanani. He has been taking the class for a year and a half and also takes the class Mondays through Thursdays. He wants to stay healthy and plans to join the military, so he takes this class to stay fit. Although running has its physical benefits, Karamanani said that running helps more in a psychological sense.

“If you’re running up a hill, your body just thinks about quitting a million times,” said Karamanani. “It really takes a lot of willpower to keep at it and not give up.”

Karamanani has smoked for five years and quit about a month ago.

“Around my first semester coming here, I would be partying all night, smoking, drinking 40 [ounce bottles of beer], eating hamburgers, and the next day coming out here and running like an animal,” said Karamanani. “But I’m older now. I’ve mellowed out.”

He said that taking this class is motivation to stay off cigarettes and live a healthier lifestyle.

All the runners realize there are no shortcuts to any place worth going, and Lopez gives his class an analogy to drive the point home.

“Our bodies are like credit cards,” said Lopez. “We either pay now or we pay later. Some of our bodies have higher interest and we have to work harder to burn it off. If you wait later you have to pay more interest.”

Claudia Alvarez, one of the athletic trainers, runs and participates with the class.

She was on GCC’s inaugural women’s soccer team and also on the women’s basketball team. She has a bachelor’s in kinesiology from Cal State Northridge and she played on their soccer team.

“Coach [Lopez] does a good job with supporting everybody and having everybody work together,” Alvarez said. “It’s hard to run by yourself, but when you’re with other people who keep pace with you, it is very helpful.”

She added that the class gets her adrenaline going and that it’s a good way to burn calories.

Another runner in the class is Jessica Kaugl, a business major. This is her second semester taking the class and she attends it on Tuesdays and Thursdays. She joined because she felt she wasn’t pushing herself hard enough. Now that the class has improved her running form and helped her lose weight, it has made her enjoy the experience even more.

“As it’s helped me get into better shape, I’ve made healthier choices in other aspects of my life,” said Kaugl. “I’ve noticed I’m eating better and trying to live altogether healthier because I’m noticing the results of the running class.”

One aspect all the runners agree on is the fact that the class improves teamwork and encourages camaraderie.

“We all encourage each other, and we each have our own kind of goals to challenge ourselves to,” said Kaugl. “I pick out a few people who run a little bit faster than I do and then I challenge myself to try and keep up with them.”

One of the runs in the class that improves team unity is called the Indian run. The runners line up in a single-file line and then begin running around the track. The person at the end of the line has to sprint to the front, and then the next last person does the same. This keeps going for three laps.

They take a break, and then do it again for another four laps.

“The Indian run stops the good runners from showing off and teaches them discipline,” said Lopez. “And the slower runners feel they’re a part of the group, so they both meet in the middle.”

As the runners run around the field, Lopez follows and shouts out words of encouragement to his group.

“He’s really encouraging to the beginners and a little bit harder on the faster people,” Kaugl said.

The runners are graded by class participation and attendance. There is also the Cooper’s Test once a month. The mile and a half run tests a runner’s fitness based on how fast they run, from very poor being the worst category to superior being the best category. The guidelines for the categories change based on the person’s age and sex.

Aside from the training and tests, the students in the class have to write a paper about the different stretches they do before each run and explain why they do them. They also have homework, which is to walk at least 30 minutes a day outside of class. Lopez said that his students are very honest about that.

Most of the runners like the different terrain and weather conditions that come along with running in the courses that are off campus, something that cannot be found indoors.

“It’s not an easy class; it’s not like being in a fitness center,” said Lopez. “I make them work here. But I also realize that they all have their limits, so we have to put it together. It works out well.”

Some of the students have marked their calendar for the 5 kilometer Turkey Trot, a fundraiser that benefits the Dana Point 5th Marine Regiment Support Group and the Second Harvest Food Bank of Orange County. It will be held on Nov. 24.

The runners who partake in it most likely would not have dreamed of running in this type of competition had it not been for this class. To many, this class is life-changing.