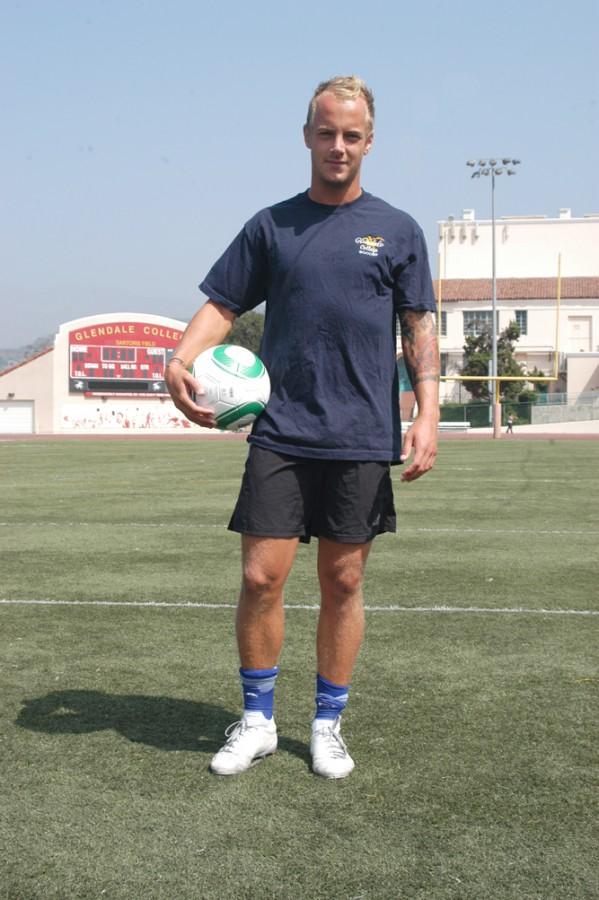 Anton Forsberg has been a soccer player since he was 6-years-old in his hometown of Soderhamm, Sweden. He almost quit playing soccer last summer because of his age and his injuries in his lower back and upper legs.

He knew before he began high school that he wanted to focus on wood building. After being an apprentice for two years, he started his own construction and carpentry company when he was 18. He was self-employed and would occasionally work with other companies when he was on vacation from school.

Then he searched on the Internet where a Swedish company called Go West caught his eye. The company sends 30 to 40 students to the United States on scholarships. He had only visited the United States two or three times for vacation.

“I thought I’d give it a shot,” Forsberg said. “I read about it, and it was soccer and studying. It was what I wanted to do all my life. That was a good combination.”

“All of my relatives and family were like, ‘Are you sure you don’t want to move to Stockholm? Do you really have to move to the U.S.?’”

Forsberg’s decision to select business administration as a major is twofold. One is to help him with his construction business and the other is to avoid feeling like the black sheep in the family. His parents majored in economics and his older sister is an international business major.

Forsberg came to the U.S. in the middle of August with one of his teammates from Sweden, Victor Olsson, who also plays for the Vaqueros as a center defense or center midfield. Both of them wanted to come to GCC and had heard about the soccer team. They are also roommates and live in an apartment near GCC.

Another international student is Christian Lopez, who was originally from Spain. As the team’s co-captain and center midfield, he gives rides to his teammates including Forsberg and understands what is needed for a team.

“It’s good to have a player like Anton,” Lopez said. “He’s a runner and a fighter. Outside of the field, he’s a good guy. That’s better for the team.”

Forsberg grew up in Soderhamm, Sweden, which has a population of 25,000 people.

His childhood friends who were also his neighbors always gathered to play soccer. Most of them started with a junior team when they were 7-years-old.

Forsberg’s father coached the junior team and coached him from ages 9 to 13. Despite having many fights with his dad, Forsberg liked having his dad as a coach.

“I had a bad temperament when I was younger. If I was angry, he told me to get out of here,” Forsberg said.

“When you put it all together, I think it was good exposure, not just because he was my dad. He was also a good coach.”

Although he was raised as a forward, Forsberg was a wing player for two years. He started to play at the senior level when he was 16 or 17 years old.

He said that as a forward scoring a goal is always fun, but there is more than just scoring because a player has to think about their running and support.

“I play a different way now,” Forsberg said. “When I was younger, I used to score two to three goals. Now, I don’t mind if I do an assist. If you have the lead, you don’t have to turn around and score. You have to think more and strategize.”

Agoston also described his playing style on the field.

Likewise, Forsberg and Olsson realize that Agoston is a great coach.

“Joe is a good coach,” Forsberg said. “He watches your attitude and how you change your teammates. You have to be with your team. You can’t be like a diva and not care about others.”

He does not know where he would like to transfer to yet since his main focus is on classes at GCC right now.

David Nelson, director of international recruitment and outreach, said that he has travelled abroad to encourage students to attend GCC. He made a presentation in Stockholm and knows the educational consultants that Forsberg used. Nelson said that having the international students on the soccer team helps contribute to GCC.

Forsberg noticed that there were some differences between playing in the U.S. and in Sweden.

The most noticeable was the weather. Because it snows most of the year, they must play soccer in an auditorium.

Mikael Andersson, a midfielder and wing defense who is also from Sweden, was affected by the weather.

“You feel like a baked potato,” Andersson said. “I remember the first week I was passing out after I ran. What doesn’t kill you will make you stronger.”

Another difference is that while in Sweden, the clubs played against older and bigger athletes who knew their positions well. In the U.S., the players are similar in age to Forsberg. He almost forgot what it was to play with guys the same age.

“Each player knows what position they are playing,” he said. “The midfielder knows where he stands. I think people know the positions better in Europe.”

Agoston stressed the importance of teamwork in soccer.

“He is a team player,” Agoston said. “There are some players that are individuals who want to get the attention. He doesn’t play for himself; he plays for the team, which is important obviously in a team sport.”

In Sweden, he played for the Soderhamm FF, which is a football club in his hometown. Rather than represent a school, he said that most players represent their club or division. Coming to GCC has allowed him to represent more than just a team.

“I am proud,” Forsberg said. “It makes me feel like I better do well. They gave me a chance here, so I want to give 100 percent to show my appreciation.”