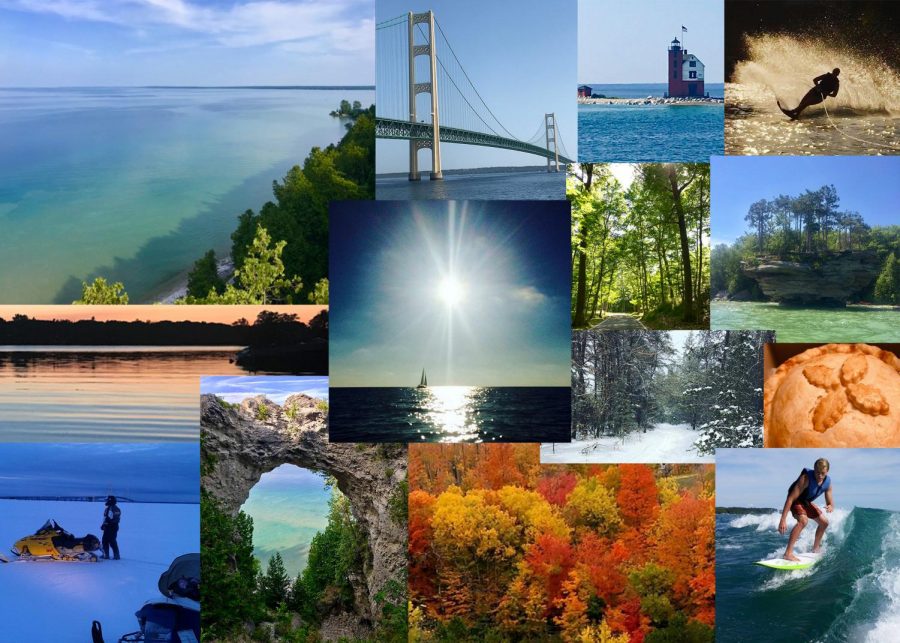 Visual proof of the untamed wilderness and dramatic weather changes the state is known for.

Like many before me, I am a snow refugee. To escape Michigan the state I’m originally from, I made the 2,000 mile trek across the country to the neverending summers of Los Angeles. I could no longer bear living in a boring cold Midwestern tundra, with absolutely nothing to do. I only go back for a visit when I finally cave to the spirit crushing guilt- trip doled out by the family goldendoodle via FaceTime.

The stereotypes are all painfully true. My lifetime of experiences are proof of it.

In case you don’t already know, Michigan is a state made up of two peninsulas. The Upper Peninsula’s name is abbreviated to its initials, U.P. but strangely, the Lower Peninsula is not shorted in the same way. If you were to refer to the Lower Peninsula as L.P. nobody would know what youre talking about.

The two land masses are connected by a five mile-long swaying suspension bridge called the Mackinac Bridge, or as the locals ironically nicknamed it, The Mighty Mac. But don’t worry, it has nothing but a few measly miles on the iconic Golden Gate Bridge.

Under the bridge lies two of the four the Great Lakes, which is what the state is almost completely surrounded by, almost like a mote. However, I would take the name with a grain of salt, mostly because the water doesn’t contain any. Its light blue tropical lagoon hue only makes it a wannabe ocean. The oversized lakes are home to surprisingly boring freshwater marine life and do not offer the adrenaline rush high of a potential shark, jellyfish or stingray attack.

When the locals talk about going on vacation, they almost exclusively use the phrase “up north.” This loose term is well understood as venturing upwards from the bottom half of the Lower Peninsula. This usually means that they are headed to one of Michigan’s 11,000 lakes, croweded campgrounds or overvisited national parks. If it’s summertime, this migration is to find relief from the sweltering heat and dense humidity. To beat the heat, beachgoers submerge themselves under recently thawed lake water and listen to an deafening amount of Kid Rock, staying put until the leaves change.

Despite being acquired by the state in 1836, the U.P. still remains remote and wildly unsettled. There are only a few small cities peppered throughout the large landmass, and most of them are still very rustic and primitive. The rest is dense wilderness and narrow scenic roads. The few inhabitants, also known as Yoopers, are unfriendly and unpleasant, because their hearts have frozen over from the many harsh, never-ending winters. They are especially green with jealousy towards outsiders, because they are painfully aware that everyone lives somewhere better than they do.

Lake Superior, the Great Lake that borders the north coast of the U.P., is the second largest lake in the world, but you can’t even enjoy it, due to its constant frigid temperature. Don’t be fooled by the locals who look like they are having the time of their lives cliff jumping into the water and swimming. They have developed an extra layer of protective skin from years of exposure, which makes them immune to the icy waters. If you are not from there, you will get hypothermia in a matter of seconds, which will leave you with a permanent skin discoloration that will forever serve as a painful reminder of your near-death experience.

Michiganders will try to lure you to visit their state during the fall season, enticing with people with what they claim are brightly colored trees and “famous” cider mills. Exhibiting only three different colors, the changing trees are hardly a show. Once you’ve seen a few, you’ve basically seen them all. The cider mills are nothing more than farms open to the public. They make you pay to pick your own apples, as if they’re not readily available at your neighborhood grocery store. The residents will also insist that the cider made there is to die for, but the reality is, there is not a noticeable taste difference from freshly pressed apple cider and one that’s been thoroughly processed and sitting in a carton for weeks.

Michigan is notorious for having brutal winters with sub-zero temperatures, mountains of snow and endless sheets of ice. Michiganders survive by paying astronomical prices for indoor heat, just so they can hibernate in their homes. Since driving a car is impossible due to having skating rinks for roads, snowmobiles are the sole method of transportation. If you are unfamiliar with this type of contraption, it is essentially a jet ski with actual skis. The unbearable weather conditions, that would qualify as a state of emergency literally anywhere people are sane, ensures that any kind of imaginable fun is out of the question. The 40 ski resorts are lame and none of them have any reputable slopes. Snowshoeing or cross country skiing on Michigan’s 3,000 miles of nature trails is a good way to get lost and inevitably freeze to death. Another way to meet a frozen grave, are ice hotels. These are inhabitable hotels that are sculpted entirely out of actual ice. In stark contrast to most relaxing resorts, this could easily qualify as a type of cryotherapy torture.

Green eaters beware- Michiganders are obsessed with meat. The heavy German influence on the cuisine makes meat and bread the main components of every meal and allows very little room for alternatives. If you ask for something vegan or gluten free you will likely be given a tall glass of ice water by a confused server. This is not as surprising when you find out the state’s most iconic meal is coney dog, which is essentially a bratwurst smothered in a mystery meat sauce. To avoid starvation, download a food delivery app that will fly in your kale salads and açaí bowls from elsewhere.

Unarguably the worst part of Michigan, is the city of Detroit. Lately, the news has nothing good to report, simply because there is nothing good happening. The city hasn’t been updated or modernized and therefore, is littered with old eyesore buildings, whose existence is defended by “historical significance.” Rather than constructing new developments, their funding goes to keeping the past alive with places like the Henry Ford History Museum, which features a historically accurate town from the early days of Michigan. Sticking to old times, Detroit still embraces their home-found music genre Motown, which was popular way back in the 1940s.

Detroit is also extremely dangerous. Unlike most big cities in the U.S., there are not “good areas” and “bad areas,” only the latter. Rest assured, no place is safe if you are within city limits. If you choose to brave this area anyway, be warned that you will be subjected to the ravings of avid Red Wings and Tigers fans. They will protect their turf at all costs, so refrain from sporting the wrong colors.

My advice is don’t waste your time or money on the mitten state. There are much more travel-worthy destinations. Instead, take the safe bet and book your 150th return trip to Palm Springs, where you can enjoy the unchanging ultra-comfortable 120 degree weather.