Ana Salvo: How Faith and Golf Saved Her Life 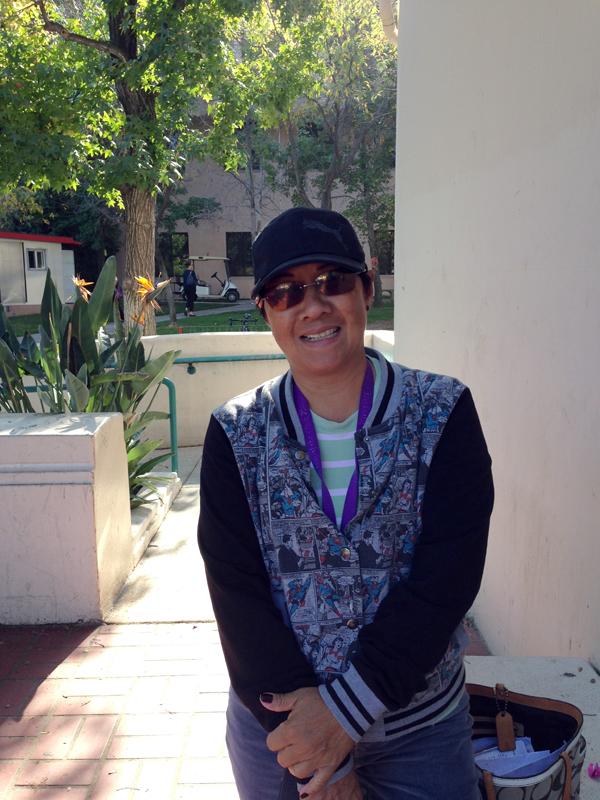 Ana Salvo, 54,  is charismatic and free-spirited religious woman who attends the nursing program on campus and plays on the golf team. But her life has been anything but carefree.
In September of 2012 she was diagnosed with Stage I breast cancer. The news sidelined her career as a dental assistant and her plans of returning to school to become a nurse.
The National Cancer Institute estimates that over 240,000 people will be diagnosed with breast cancer, making it the most common form of cancer one can get. The month of October is dedicated to raise cancer awareness, specifically breast cancer.
“It took me a week to gather my strength and courage to tell them [her husband and children] about the bad news.” Salvo said. “There was no known breast cancer history in our family until my sister had a mastectomy two years before my diagnosis.”
Salvo is a nature lover and was an active runner when she was young. She’s very competitive, yet she is compassionate human being at the same time and she takes her positive attitude everywhere she goes, including the golf field. She’s been a golfer for over 25 years and she loves every minute of it. She’s a Christian who relied heavily on her belief  during her tough battle with breast cancer.
“I got my inspiration from a Bible verse, Isaiah 43: 1-3,” Salvo said “I composed a melody from the verse that I sang whenever I was on the ultrasound table, the biopsy table and the operating table. This melody helped to calm my nerves, gave me the strength and the courage that everything will be alright.”
Cancer causes cells to multiply out of control and form into a tumor. The tumor may then continue to grow and invade surrounding tissue or spread into different areas of the body.
“I was definitely devastated but kept my composure.” Sara Salvo, daughter of Ana, said. “From then on I made sure that we will get over the issue as best as we can and move on.”
The effort to raise awareness has been driven by organizations like the American Cancer Society and the National Breast Cancer Foundation. The National Football League and National Basketball Association have gone to the lengths of actually permitting players to wear pink while they play in order to raise awareness.
“I’ve learned to accept anything after getting the news from her of her condition.” Ana’s husband, Mark Salvo, said. “The effects it will have emotionally and spiritually is something I dealt with the best as I can, without hesitation.”
With full support from her family and consent from a doctor, she decided to have a double mastectomy to prevent future metastasis.
“My advice to those who are battling cancer is to not be sad or  worried about your circumstance. Too many worries and sadness will not extend your life,” Salvo said. “I did not feel any fear or nervousness because of my strong anchor, Jesus. My spiritual strength has grown, but physically I am not as strong.”
Positivity and happiness emanates from her like the sun. She says she wakes up every morning thanking God that she is able to see another day. Rather than living in the past or living in the future she’s trained her mind to be set in the present.
She says, “People should always be happy with smiles, they should laugh and express their love to their families.”