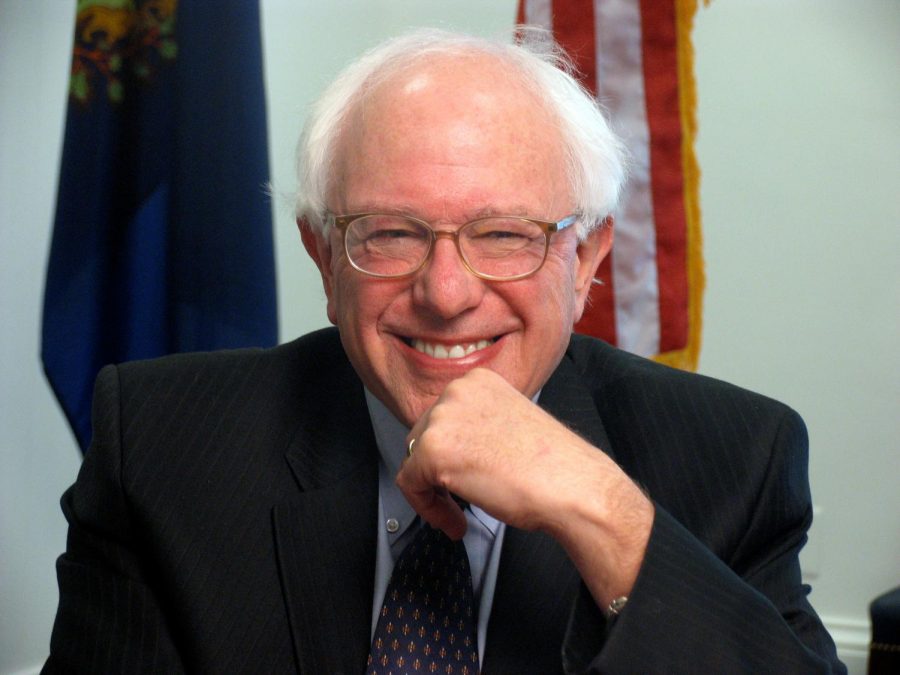 The topic of President Donald Trump’s impeachment was dominating the line of questioning 20 minutes into the debate. Questions were directed at former Vice President Joe Biden about the Ukraine scandal, and Trump’s baseless accusations of corruption towards the Bidens.

As Biden was gathering thoughts, off-camera viewers heard a voice, “Anderson … Anderson?” The voice belonged to Vermont senator Bernie Sanders, trying to get the attention of the debate moderator Anderson Cooper.

Sanders waited for Biden to answer, with an explanation about his son and Ukraine, then stated, “I think that it is absolutely imperative we go forward with impeachment. I hope that he is impeached … what we have got to do is end this corruption, set a precedent for future history that says presidents like this cannot behave this way. But we cannot and must not turn our backs on the pain of the working class of this country.”

Sen. Sanders has the American people at the forefront of his mind. His second-best quality is that he is always ahead of his peers, in terms of policy and integrity.

Other powerful political figures have their skeletons; Prime Minister Justin Trudeau and his blackface scandal, Hillary Clinton not supporting gay marriage until 2013, or the leaked 2005 recordings of Trump saying, “I don’t even wait. And when you’re a star, they let you do it. You can do anything. Grab them by the pussy. You can do anything.” The list could go on and on for people in powerful positions doing awful things.

With Sanders, voters don’t have to worry about scandals or drastic changes in his values. Sanders ran for governor of Vermont in 1972 and his letter to a local newspaper about his platform read like it was written for a modern-day campaign. “Let us abolish all laws which attempt to impose a particular brand of morality or ‘right’ on people. Let’s abolish all laws dealing with abortion, drugs, sexual behavior (adultery, homosexuality, etc.).”

Even in 1970, Sanders had the foresight that the war on drugs, restrictions on women’s bodies, and upholding laws against gay behavior, was unconstitutional. The values of his previous campaign came before Roe v. Wade (1973), Lawrence v. Texas (2003), and certainly before the nation’s progressing attitude of rehabilitation over criminalization towards drug use.

His 1970s views are more progressive than current candidates for the 2020 election. Rep. Tulsi Gabbard (Hawaii), a woman running for the Democratic nomination in 2020, stated at the debate “abortion should be safe, legal, and rare.”

The word “rare” has a sting to it, and brings a stigma of shame and judgment to people who seek the procedure for non-life-threatening reasons. Progressive voters are sick of democratic candidates pandering to anti-choice voters by hiding behind the word “rare.” People should have freedom over their bodies with no strings or stigma attached.

Sanders and his policies have always been looked at as radical, but I prefer the term “ahead of the curve.” His proposals are no more radical than Beto O’Rouke’s mandatory buy-back of assault weapons. Unlike O’Rourke, Sander’s policies have realistic outcomes that don’t involve police showing up to the doors of American people forcefully taking their weapons.

One of the most intense moments of the debate came when Kamala Harris and Elizabeth Warren argued over the suspension of Trump’s Twitter account. However, that wasn’t the interesting part. Harris used minutes of her valuable speaking time urging Warren to support her in calling for Twitter to take down Trump’s account.

Harris’ urgings produced nothing more than Warren saying, “If we’re going to talk seriously about breaking up big tech, then we should ask if people are taking money from the big tech executives.” This whole topic seems like a desperate attempt from a candidate who is losing momentum and grasping at straws to stay relevant, and the easiest way to do that is shining a light on Trump’s twitter account and attacking a front-runner.

As a woman, I am often met with surprised looks when I say I’ve supported Senator Sanders since his 2016 run. I’ve supported him over Hillary Clinton, and I will continue to support him over Elizabeth Warren during the primaries. People think his base is made of ‘Bernie bros,’ young white sexist males, but according to recent polls by The Economist, Sanders polls top three in all demographic categories except people who have an income over $100k.

Sanders is a candidate who understands the American people and what we need. Americans are desperately trying to have their voices heard, we learned this with the 2016 election. The election results showed that 46% of Americans felt that Trump heard them and would help them. A trust-fund kid from New York, whose net worth surpasses $3 billion, was able to convince working-class Americans that he understood them.

I have met so many Trump supporters who tell me that if the 2016 election was between Sanders and Trump, their vote would have gone to Sanders. Polling by Emerson College shows that the only candidate who beats Trump in Iowa is Bernie Sanders. A swing state, Iowa is a very important state to win in the presidential election.

If what’s most important to Democrats is defeating Trump, our best shot is Bernie Sanders. He is a trustworthy candidate with consistent views, and unbreakable integrity.

Natalie Casey may be reached at [email protected]