An Imbalance in the Justice System

The Botham Jean case raises concern for a racially prejudiced criminal justice system in the U.S. 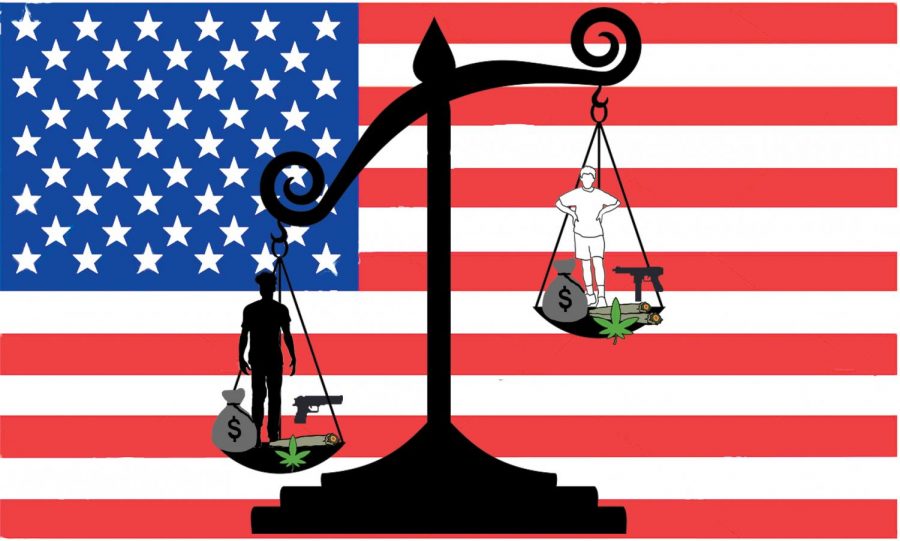 On the night of Sept. 6, 2018, Amber Guyger, a 30-year-old off-duty white police officer from Dallas, entered what she thought was her apartment — only to find out that it wasn’t. She shot and killed the actual resident of the unit. Botham Jean, a 26-year-old African American man, was having a casual night in, watching TV and eating ice-cream. Those were his final moments before Guyger wrongly entered his home and pulled the trigger.

Her apartment was exactly one floor down.

Considering that Guyger was off-duty at the time, it is inevitable that she abused her power as a police officer during this fatal event.

Court evidence revealed that Guyger was distracted as she was sexting her boyfriend at the time of her faulty entrance, which would cost her more than just her police badge. Guyger was being considered for a prison sentence that ranged from five to 99 years, according to court documents.

While the Oct. 1 verdict was a huge step forward in the justification process for the many innocent lives lost to police brutality, community members were left angry and confused. Guyger was sentenced to 10 years in prison for murder, with a possibility of parole in five years.

“Of course that’s inadequate. The entire justice system is inadequate and the work must continue,” S. Lee Merrit, an attorney who represents Jean’s family, wrote on Twitter.

The sentencing for this now-former police officer was too lenient and unfair for a crime of such caliber.

Putting it into perspective, if an African American man broke into a white woman’s house and killed her without probable cause — like in the Guyger case—  would he still get 10 years? Would he get 25? Perhaps life in prison? Would he get shot?

A study by the U.S. Sentencing Commission’s analysis of prison demographic data between 2012-2016, suggests that black men serve sentences that are 19.1% longer than those for white men for similar crimes. Of course, that’s given if the white criminal wasn’t a police officer and was not given preferential or lenient treatment.

History has again and again played out perfect examples of a broken criminal justice system when it comes to non-racial and unbiased judgment, meaning that there have been many cases in which a certain race was given preferred treatment.

Bernard Noble, for example, a Louisiana African American was sentenced to 13 years in prison for the possession of two marijuana joints. A recent study called “The War on Marijuana in Black and White” conducted by the ACLU suggests that despite the fact that black and white people use marijuana at roughly the same rates, the vast majority of counties across the U.S. arrest blacks at a higher rate than whites, most of them with a disparity that is greater than 10 to 1.

Some of the early signs of police brutality against black people covered in the media were played out during the Rodney King Riots in the early 90’s, when the city of Los Angeles was affected by severe cases of racism, prejudice and unjust treatment against the city’s African American community. We can trace it back to the specific unfair highly-televised beating of Rodney King, an African American construction worker, who was pulled over by the L.A. police and recklessly attacked, because he refused to get out of his car. This caused a series of unfair racial profilings – a large anti-Black movement in the city, causing an uproar for equality from black communities across the nation.

While it occupies the larger portion of police brutality based on racial prejudice, the issue doesn’t just end with the Black community. According to MappingPoliceViolence.org, an organization which tracks police violence, 17% of Hispanic victims were unarmed, compared to 21% of Blacks and 14% of whites. Additionally, the source states that 99% of cases in 2015 have not resulted in the conviction of involved officers.

Nonetheless, there is plenty of data, hundreds of studies and thousands of cases which suggest that the U.S. has noticeable loopholes in its criminal justice system, as it still allows for racial prejudice and preferential treatment based on race to sneak up in its court systems.

It is also important to note that the ruling against Guyger and finding her guilty in such an egregious case of manslaughter was a step forward, but not what America needed in its seemingly corrupt justice system.

Anahit Sydney can be reached at [email protected]