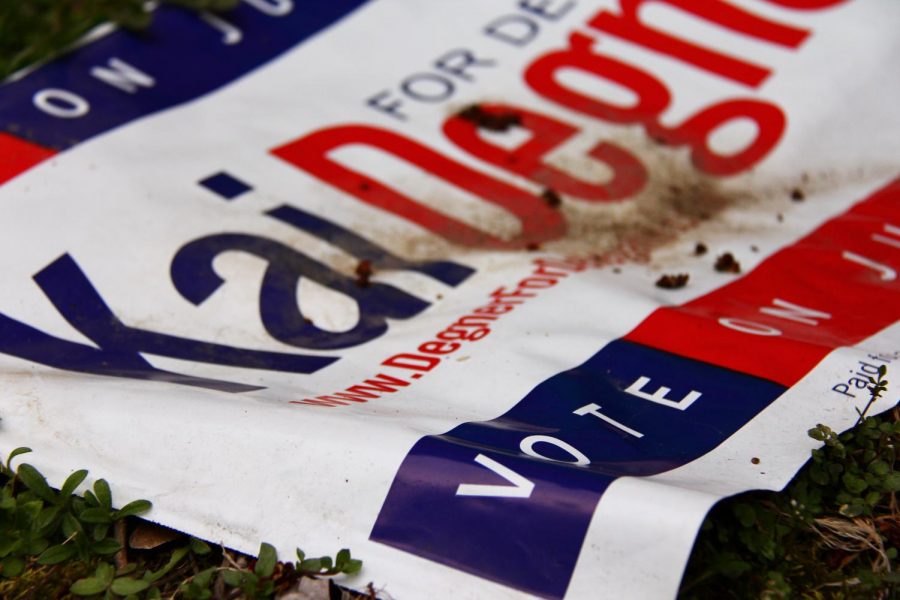 A large promotional banner encourages voters to partake in the elections by voting for their candidate.

It is every citizen’s responsibility to vote. This is a sentiment that is all too familiar to many Americans. It crops up every time election season begins, as political science teachers and celebrities try to convince more people to vote.

This mentality runs strong among Americans, and saying “I didn’t vote,” is likely to earn the animosity of one’s peers. Despite this, American voters are renowned for being apathetic about elections, as they simply do not care about them.

Despite the level of excitement Americans expressed about the Trump campaign, the voter turnout during the 2016 elections, was only at 60 percent. Only 60 percent of the voting population appeared for such controversial presidential elections.

In fact, for the past 100 years, the highest voter turnout happened in 1960, in a race between John F. Kennedy and Richard Nixon, and that was only three percent more than that of the Trump versus Clinton elections.

The Midterm elections are even more ignored, with their peak turnout being in 1966 with 43 percent. This score has now fallen down to 35 percent in 2014. This trend is not limited to America either.

In Europe, elections for the European parliament dropped from an overall turnout of 62 percent in 1979 to 42 percent in 2014. It seems that a good half of the voting population just does not participate in the electoral process. One is left to wonder why such a phenomena can occur, especially in a nation that is so proud of its voting rights.

The depressing truth behind these numbers is that voters simply don’t care. Ideally, citizens vote for politicians who will pass laws that favor those very citizens. The problem, however, is that passing laws is a long and arduous process.

Sure, eventually some law may crop up that gets sensationalized and a lot of press coverage. Then, given time, it is forgotten and the public moves on. Considering the modern attention span is shorter than it has ever been in the past, no law remains in the collective consciousness for too long.

As a result, the act of passing laws becomes too long and so the effect our candidates have becomes muted. A voter no longer cares for candidates because voting them into or out of an office does not produce instant results.

To see results, one must wait months, if not years, and actively keep up with what the candidate does. The common American does not bother with this.

The simple matter is that the Founding Fathers designed American politics to be slow. Every bill is discussed incessantly before becoming a law, every appointee is questioned thoroughly before getting their due position, every debate is long and filled with filibusters, and every trial takes ridiculously long.

It becomes hard to keep track of all these politics. Unless one actively follows the development of a bill or the proceedings of a trial, very quickly these matters disappear from the public consciousness.

This results in further complication of the issue. Voters who are bored with the politics of the nation grow ignorant. Often voters don’t know what their congressional district is, who their candidates are, or what propositions are being discussed in the election day.

It is clear that this is not the result of information hidnerance. The advent of Google makes it so that one cannot feign reasonable ignorance.

Another reason for low voter turnout is how inconvenient voting can be, and since voters don’t care about politics, nothing is being done to fix this. In many other nations, voting is either a federal holiday or set on the weekend.

Neither of these is true in the USA. In America, the election day is set on a Tuesday. Even though citizens are able to vote via mail, the placement of the voting day is quite awkward. The old fashioned excuse for this was that farmers would spend Sunday worshipping, Monday traveling to the city to vote, and Tuesday voting.

Due to the shift from an agrarian to an industrial life, this system no longer works. Most people have federal buildings within an arm’s reach, where voting booths can be set-up without problem. This means that people don’t need to travel to vote. Furthermore, it is poor choice to make Sunday free of elections so people can commit to worship. The alteration of political elections to fit a religious need seems to be an inclusion of church in the matters of state.

The question is, if political matters were to be sped up to increase voter interest, would there be more mistakes made by our government? Already, there are a good many, but this is a topic for another time. At the moment, a present and clear downfall of the slow political system of the USA, is that voters simply get bored voting.