Ride at Your Own Risk

Does Metro do enough to prevent sexual harrasment? 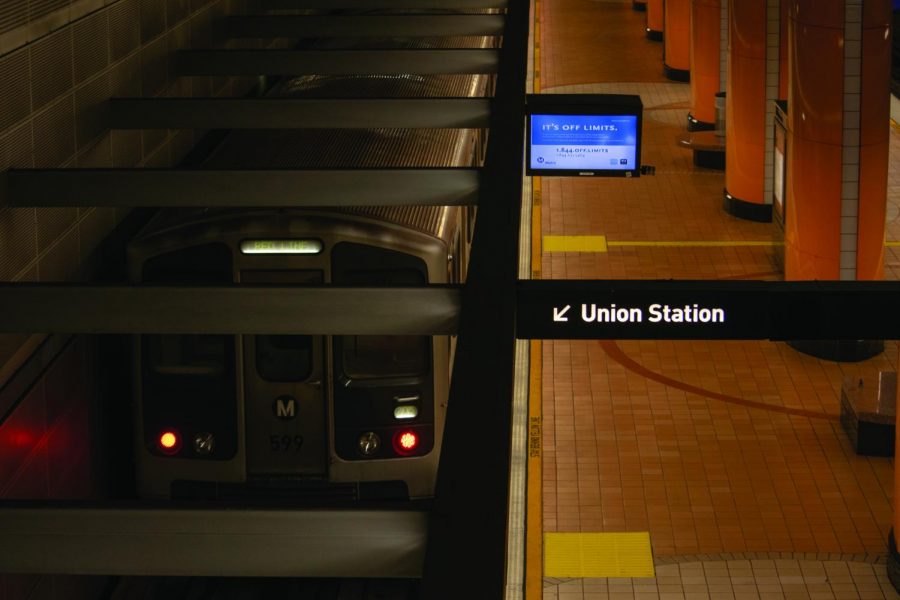 A warning about sexual harassment looms overhead as the popular commuter train with connections to Hollywood and Downtown Los Angeles, arrives at a station.

Riding public transit has never been the most appealing transportation option. Strangers cramped in a tight space makes it uncomfortable and the frequent stops makes it slow moving. It is the breeding ground for communicable diseases, back pain from hard seats, and sexual harassment.

In 2015, Metro conducted a rider survey, which revealed over 1 in 5 riders were subjected to sexual harassment and a large percentage of those went unreported. In response, Metro launched a campaign in April of 2015, which promised a zero-tolerance policy in effort to end sexual harassment on their lines.

The campaign included signs placed at bus stops and inside of busses and train cars, with slogans stating sexual harassment is “Off Limits” and encouraging an “If you see something, say something” culture.

While their efforts may be convincing from the outside, it is questionable whether or not they their initiative has actually worked. Have they done enough to eliminate the threat and do women now feel safe riding Metro? A few women who have used their services say otherwise.

One startling account happened when Leah Cohen and her sister were riding the Red Line train to what was supposed to be an exciting night at the Dorothy Chandler Pavilion in 2016. They deemed it a smart choice to take the Metro since parking at the venue was going to be scarce and expensive. Shortly after boarding the train, they found seats next to each other.

“Everything was fine until a guy approached me and said ‘Hey can I sit near you?’ And there were only two seats there [the ones they occupied] and I said ‘I’m sorry, there is no space.’ Now there was a little bit of like, a corner of the seat that wasn’t taken up from the seat that I was sitting in, and so slowly he kind of sits on that corner and then, as the metro continues to go, he slowly kind of is getting on my lap like sitting on my lap. And I was like ‘Excuse you.’ and I shoved him off me and he says to me ‘What? I can’t sit on you lap?’ and I told him ‘No you can’t sit on my lap. Get away from me. I said no. Find another seat.’ So then he walks away and as he is getting off at the next station, because we were just pulling into the next stop, he says to me ‘Well, you just don’t like black men.’ To which I got furious and I said ‘You are talking to a predominantly African woman’ because I do have African roots. And I think the only thing that pissed me off more than the fact that he was being such a pig about [the sexual harassment], was that he thought it was okay to throw in a race card. Anyone with common sense wouldn’t do that to anybody.”

Immediately after the incident, Cohen got off at the next stop and filed a lengthy report, only to be told there was nothing Metro could do. Discouraged by their complaint being handled so poorly, both her and her sister have since refused to ride the Metro, no matter how convenient it may be.

“Ever since then, my sister and I declared a complete boycott on public transit in LA, which is so funny because I could be anywhere else, I have been in different countries and different states even, where the public transit is fantastic and if anything, I prefer it. I won’t even rent a car but specifically in LA there is no other option. I absolutely have to have a car everywhere I go because of that, which is just an inconvenience to me because it is just additional bill every month that sometimes is difficult to pay off.”

Another unfortunate incident took place on a train platform in August of 2018. A woman, who wishes to be identified as just Liz, was exiting the Gold train at the Soto Station with a female friend. As they went up the escalator, on their way up to the ground level, they noticed two men barreling towards them. Naturally, they stepped to the side to let them pass, but were surprised when they stopped directly behind them. Thinking nothing of it at first, it wasn’t until they heard muffled laughter that they looked behind them, just in time to catch the men taking pictures up their skirts. Horrified, they ran away and located the nearest security guards, who were standing just outside of the station entrance. One security guard chased after the men, who had disappeared back down to the train platform. Upon returning, the guard notified Liz and her friend that the men had gotten away, and that there was nothing more they could do. They did not take down any information, a statement or give them the option of filing a report. The pictures the perpetrators took most likely still exist today.

My own experiences have been all too similar. When I first moved to Los Angeles from a small town in Michigan and started riding the public transit, the first thing I noticed were the too-long stares and suggestive gestures. Quickly, I learned to dodge attempts of unsolicited comments and “romantic” advances by putting in my earbuds and hiding my face behind a book, pretending not to notice when someone was trying to get my attention. Unfortunately, that strategy proved to be only mildly effective, and I have personally experienced sexual harassment while riding. Although there have been several, two related incidents stick out the most.

It was a sunny Saturday morning when it happened for the first time. I was headed to my English class at Glendale Community College, located in an area I had previously considered to be reasonably safe. A sizable man boarded the nearly empty bus, hurriedly made his way to me and sat down in the seat adjoining mine. Trying not to assume the worst, I casually attempted to move seats but as I started to get up, he slammed his body against mine and pinned me against the window. Despite being paralyzed with fear, I managed to yell “STOP” and pushed him off. Turning his body sideways to block the way out, he attempted to grope me but I managed to block his hands. I felt trapped and panicked that no one was coming to my aid. Luckily, the bus stopped and he suddenly got off. I was at a loss for words and too shaken up to report it to the driver at the time. Instead, I started taking a different and less direct route, which added about twenty extra minutes to my trip.

Eight months later, I took the same bus to get to a different class, assuming it would be okay. I sat helplessly in my seat as I watched the same man as before board. As soon as spotted me, he pushed through the crowded aisle, reached over the woman sitting next to me, grabbed my wrist and pulled hard. It was in that moment I realized he was not only harassing me, but that I was being singled out and targeted. This time I was enraged enough to work up the courage to report it. With shaky fingers, I dialed the sexual harassment number listed on Metro’s website. A man with an unsympathetic tone answered and informed me he was handing my case off to the police, which was something I wasn’t expecting. When the officer arrived, he was mostly sensitive to the situation and while he didn’t discourage me from filing a police report, he wasn’t optimistic about the future of my case. However, I was interested in a more immediate resolution by Metro. I simply wanted them to ban my harasser so I could commute safely to school again, rather than going through the menial process of pressing charges. This was apparently not an option. I have not rode that bus again to this day.

Metro threatens a hefty fine of not paying their fare, but they do not warn of the repercussions for sexual harassment. Metro’s hands-off approach to sexual harassment appears to be unsurprisingly ineffective at making their services safer for women. Of the many stories victims have shared with me, not one has ended with the harasser being reprimanded. If offenders rarely ever face consequences, there is nothing to prevent them from continuing to hurt and harass women. Metro has not returned a request for comment.

The above altercations and the way they were handled are absolutely unacceptable. As a taxpayer, hold Metro to their promises and demand they make sexual harassment truly off limits. We all deserve better.