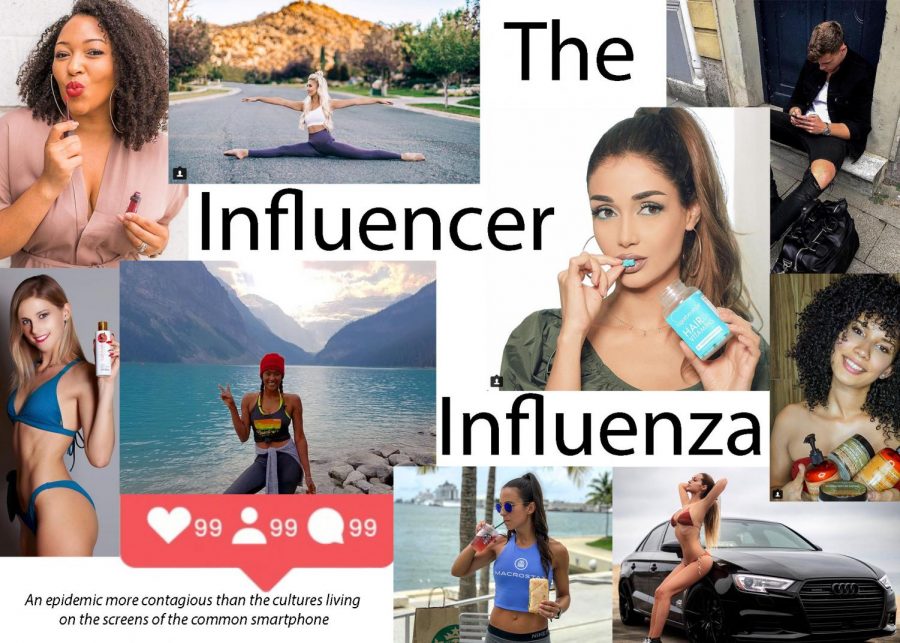 An ad for trendy new restaurant approved by a foodie, a photo of a perfectly groomed dog eyeing at jar of treats hungrily, a Boomerang loop of a girl kissing a tube of lipstick with bright cherry-red lips, an Instagram Story of a pretty girl instructing to “swipe up” to get her fashionable look, and a post encouraging a click through to the link in bio for 15 percent off chic home furnishings. These are just examples of some of the sponsored content that have appeared on my Instagram feed in the first 10 minutes of scrolling.

The emergence of social media not only provided a space for people to express themselves and share content, it also created a platform for people to put themselves on a pedestal. Deemed influencers, these users can be described as online public figures who have the ability to distribute content and persuade large groups.

The influencer industry, specifically the subcategory of micro-influencers, has exploded in popularity. A micro-influencer is a smaller scale influencer that has between 1,000 and 100,000 followers. They will oftentimes hone in on an area of interest, such as fitness, lifestyle or fashion and post tasteful pictures and material that correspond. Content can come in the form of blogs, Tweets, Instagram posts, etc. Since becoming one is relatively easy, the number of micro-influencers has been on a steep increase, as people chase the internet fame.

Influencers, supposedly more real and relatable, first piqued interest because of how different they were than too-perfect celebrities the masses were too used to seeing. As influencers started to grow in popularity and quantity, businesses started to take notice. As a result, ads and product placement contributed by influencers that have infected the internet worse than pop-ups before the blocking feature. The only difference is, in this form, it’s accepted.

Not surprisingly, this is a gold mine to brands who use the internet to promote. Influencers have revolutionized the way brands and marketers reach a significant portion of their target audience on the internet. Instead of signing a expensive celebrity endorser, multiple influencers can do a version of this on a smaller scale and at a minimal cost.

Aspiring models, actors, musicians and visual artists frequently turn to social media channels as a tool to gain more exposure and accumulate a fanbase, in hopes to further their careers. If they reach a level of mild success, they are considered micro-influencers.

As a result, self-promotion on social media has largely replaced the traditional ways, which means aspiring artists are no longer seeking agents, managers or professional to help them get in front of talent scouts. They may rationalize it as a smart alternative to break into the industry, but by never enlisting the help of a professional, they are inevitably robbing themselves of opportunities social media may not be able to offer. While online exposure has worked for a few celebrities, it can be unrealistic and risky. Hollywood is not known for providing a safe work environment and many are going in without the protection and advocacy provided by an agency. This can leave an artist vulnerable, underpaid and even exploited.

While awaiting their big break, these artists often represent brands and try to generate sales. However, it is easy to become more preoccupied with pushing products rather than their careers. At first, endorsing a product makes them look important and sought-after, but people tend to get carried away and overdo it. Ironically, this causes fans to eventually lose interest, because everything they post is now an ad and not art.

An obsession with a glamourous lifestyle and a fever for fame coupled with the lack of a marketable talent, makes the prospects of being an influencer become extremely attractive. Consequently, there is an immense amount of interest in becoming an influencer, so much, it’s practically taking over the internet. For this, people are willing sacrifice their own individuality to turn themselves into a digital billboard, without a second thought. This of type of gilded fame can be traced to the Paris Hilton/Kardashian mentality, where the status of fame is attained for no real reason other than glam and scandal.

The lifestyle seems incredibly attractive from the outside, but behind the lens depicts a different story. Contrary to popular belief, many seasoned influencers are still struggling financially. There are instances where an influencer can an over 100,000 followers but under $100 in their bank account. The brutal reality, is it takes at least a million followers before there will be any substantial compensation.

To enable their online image, there are many who will turn to unconventional and dangerous methods to support themselves. I have witnessed many influencers become involved in illegal activity, maintain questionable relationships or contacts for networking and financial support, or bend their personal morals to take work in the sex industry, all in order to survive. Not a shred of evidence of this darker side is found anywhere on their profiles as it is carefully hidden from the public eye.

From working with influencers on the corporate side, I can say from experience that the hunger for fame is astonishing. I was stunned by the lengths they were willing to go for just a few bottles of lotion and a low-dose of validation. Or how upset they would get if I told them their post wasn’t up to the brand’s standards and they would plead with me to give them another chance to post, in fear we wouldn’t work with them in the future.

The other influencer pitfall is the shared belief that they hold more power than they actually do. Even with the presence of a loyal following, influencers often lack the actual influence it takes to inspire a purchase. This sense of entitlement leads them to try to solicit freebies incessantly from businesses, offering follower impressions in place of currency. Since there are too many influencers and not enough that are worthwhile, businesses get overwhelmed with requests and start to ignore them altogether, including the select few that would actually benefit the business. Realistically, businesses cannot constantly give things away for promotion and need to ensure its worth it when they do.

While influencers may seem more trustworthy than a TV commercial, beware of the “buying advice” they give. Since they are independently contracted and not regulated by the government agencies that normally oversee ads, they essentially have free-reign with their content. This means influencers can overexaggerate, make false claims and even flat-out lie without being held accountable.

Why not unfollow them?

The reality of living in Los Angeles is many, if not all, of the influencers I personally follow are people I know in real life. They are average people with normal lives and when I first agreed to follow them, I assumed their profile would reflect that. Instead, I was unknowingly subscribing to constant posts of practically the same unremarkable selfie again and again, cheesy inspirational quotes and amped-up pictures that create the illusion of an experience that looks more interesting than it actually is.

Interacting in-person with influencer friends, leaves me with the questioning whether or not I have a real friendship with them or if I am I just another follower and like. I question that every time I am confronted about not liking their fifth post of the day or when they seem to only text for caption ideas. At times, I feel like just another one of their fans and that I serve the role of an semi-oblivious groupie to their so-called famedom. The truly sad thing is while they are so absorbed with their online “friends,” it inhibits them from building real relationships offline.

To maintain peace in my person life, for now, I will just silently hit the “mute” button.

Internet fame is going to be inevitable due the web’s widespread accessibility and vast popularity. Naturally, there are talented, fame-worthy people, who are bound to be discovered. However, only a small percentage of the contributors, who are trying to make a name for themselves, are going to have what it truly takes to be successful in the entertainment industry.

The majority do not, yet they are still receiving a disproportionate amount of attention.

Does that mean we will continue to sacrifice real entertainment by having low standards and talent expectations?

The cure lies in the decision to collectively raise the bar so those who deserve it, get our attention and those who don’t, fall into a cyber abyss. We  need to finally break our dependency of the mundane and choose to live above the influencer.