One company’s rejection is another company’s next big thing 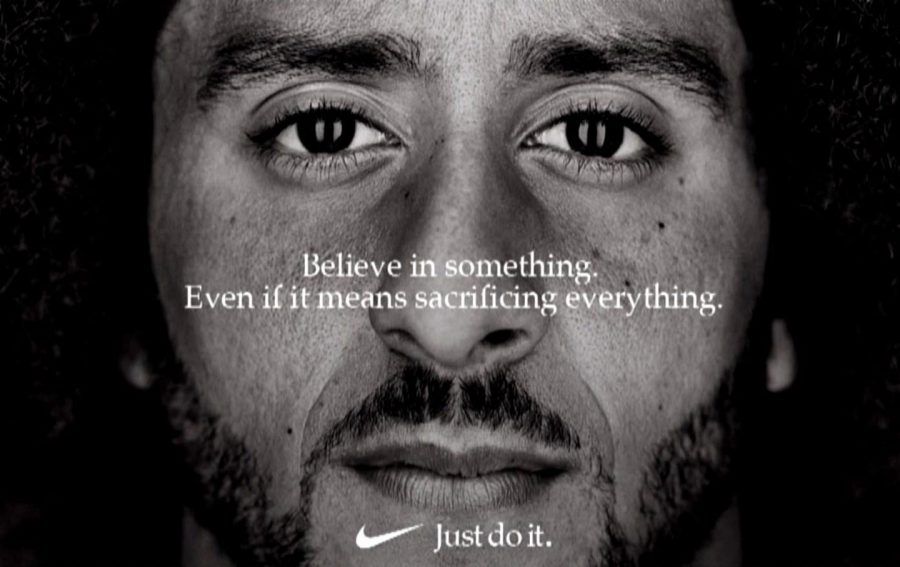 In just two lines, the sportswear retail giant, Nike, conveyed yet another incredibly powerful message in their latest advertising campaign. The stark white lettering splayed across the center, contrasts the grayscale photo of the blacklisted former NFL quarterback Colin Kaepernick’s face, giving the ad an element of intensity. The release of the inspirational ad follows a long line of influential and impactful campaigns Nike has run of athletes in the past. Nike is no stranger to being behind an ad that gets international attention, but due to its controversial nature, the 30th anniversary “Just Do It” campaign has been one of the most polarizing ever.

The powerful ad, alludes to the NFL pro-football season of 2016, where Kaepernick famously took a knee during the National Anthem. Originally a solo action, the bold move was meant to advocate against racial injustice and police brutality, targeted against African Americans in the United States.

For a large number of fans and fellow players, this was an inspirational event in the midst of a grim social justice movement and many followed his lead by kneeling in solidarity. On the contrary, others were outraged and blatantly accused Kaepernick of an impudent rebellion and disrespect against the flag and nation. In wake of the controversy, many fans were shocked during the 2017 draft when Kaepernick, a free agent, was not recruited by any of the NFL’s 32 teams.

“I am not going to stand up to show pride in a flag for a country that oppresses black people and people of color.”

Kaepernick’s involuntary leave of absence from professional football didnt stop him from continuing his protest work. Rather, it allowed him to focus solely on various outreach programs that help people in the community, such as the “Know Your Rights” campaign.

Similarly to any for-profit competitive business, Nike’s underlying intention was, without a doubt, to benefit financially from their campaign. However, that doesn’t necessarily contradict the ad’s integrity or discredit its intention to make an important point. Though it may seem like Nike is reckless with their image at times, every move they make is planned meticulously and when formulating this ad, they knowingly took a calculated risk. Nike makes a point to be very in-tune with their current and future markets, and has spent millions on extensive market research to gather this valuable data. From this, they can predict with accuracy, how their intended markets will react and therefore, can prepare accordingly for the good and the bad.

The ad received the majority of its exposure on social media, a platform where opinions spread faster than a California wildfire. Backlash can happen in an instant and trend in a matter of hours. Many people have expressed their disapproval and have even posted content of them destroying their already-purchased Nike products.

Although it’s been a little over a week, the conversation surrounding Kaepernick doesn’t seem to be letting up. It is worth pointing out, that Kaepernick’s well-intentioned efforts have received far more backlash than Kendall Jenner, who beamed proudly as she stared in a now disgraced Pepsi commercial. The commercial was deemed racist and offensive and was pulled from the air, but still she continues to enjoy a massively successful career as a professional model.

In spite of the negativity, Nike has remained relatively unresponsive to upset customers and shows no indication of backing down.

While everyone is mostly preoccupied with the race debate, there is another interesting dynamic at play that has gotten very minimal attention: what Nike has done to their relationship with the NFL by their uncalled for actions. Both are two sports powerhouses with intersecting markets but very different executions. Nike and the NFL have a long standing and close-knit relationship that appears to have been incredibly mutually beneficial, until now. Nike, still, not only planned but spent millions on a message that directly opposes the NFL’s way of handling the Kaepernick situation. Essentially, Nike blindsided the NFL at the start of football season and publicly exploited them. According to the New York Times, the NFL released a damage control statement following the ad that states they are going to start paying more attention to the social injustice issues that their players raise.

Whether or not they’ve compromised their relationship with the NFL or if it will prompt them to change their ways, will reveal itself in time.

With their sole purpose to be persuasive, ads have a unique and incredible ability to influence people and their perceptions. Since advertisements focus on stimulating and magnifying certain feelings or projecting a feeling on to someone, it has the powerful ability to alter how people feel about anything as insignificant as a candy bar or as pressing as an important social issue. Ads. also receive some of the most exposure of any other media content, which brings issues awareness they couldn’t get elsewhere. This is the reason why charity organizations often enlist the help of well-established brands- to reap those benefits.

The underlying goal of the Nike ad is this: no matter what the viewer’s stance is on this issue, they will still take in the ad’s regal essence and experience a surge of empowerment, even if only for a second. This is  a subliminal tactic and it works.

Nike is not the only major brand who has taken a side in current racial issues. In 2013 the classic breakfast cereal brand, Cheerios, received major backlash after launching a seemingly standard ad campaign. The commercial featured a white mom and black dad, and their biracial daughter. The brand noticed an emerging market of  blended and multicultural families. Like Nike, in efforts to do what is necessary and keep their brand relevant, Cheerios made a strategic decision to be one of the first to appeal to this invaluable market.

While the majority of viewers were unbothered, the ad ignited the wrath of many modern-day racists, who’s close minded ideology rejected the existence of interracial relationships and the families that are created, as a result. Citing “tradition family values” as their so-called reasoning, these groups mainly voiced their intolerant opposition on social media, even calling for a boycott of all General Mills products. Standing by their crusade for inclusivity, the brand did not pull the ads or issue any kind of apology. Rather they shut down the comment sections to the video and released this in a statement:

“…there are many kinds of families and we celebrate them all”

Thanks to their failed efforts, Cheerios remains a successful and thriving business to this day. The ad was also key in helping to desensitizing the general public to the concept of interracial families and it has since been normalized enough where a similar commercial can be broadcast without the threat of backlash.

“I never take the easy way out.”

Kaepernick had the courage to achieve his dreams against all odds, and earned a starting spot as a professional football quarterback, in one of the most competitive sports in the world. It was that same courage that led him to sacrifice it all for something bigger than himself and football. By blindly making the brave decision to take a knee, he ended up losing all that he’s work so tirelessly for, in the prime of his athletic ability.

This Nike ad is a win for Kaepernick. Despite the goal to sell sneakers, an endorsement with Nike is a new platform for Kaepernick to project his mission. Whether in support or not, it’s undeniable that this ad had a substantial impact. Most of the time ads are relatively insignificant. Every once in a while, there will be one that shakes the world.