Dangerously Thin: The Toll To Be Skinny 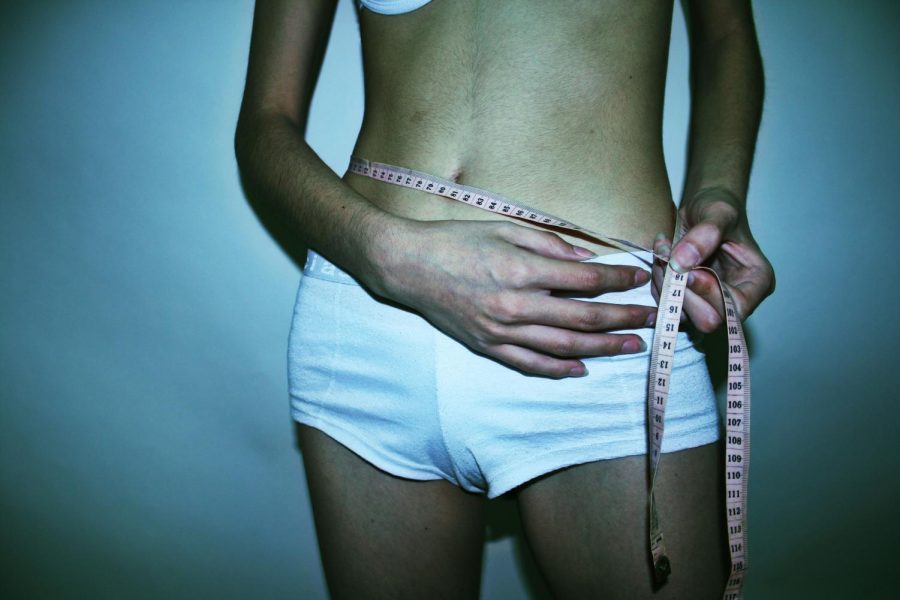 Every hour, someone dies as a result of an eating disorder. Over 30 million people in the United States suffer from an eating disorder today, according to the National Association of Anorexia Nervosa and Associated Disorders.

Society blames the media for putting too much pressure on individuals and creating unrealistic standards of how the ideal female body should look like. They blame them for only using unhealthy size zero models in their advertisements. But who is really to blame? The magazines that makes their money on advertisements or the model agencies that push these models to become a size zero?

Today’s fashion industry has created an unhealthy picture of how the ideal fashion model should look like. The ideal height is between 5 feet 9 inches and 5 feet 11 inches, and the ideal weight is between 110 to 130 pounds, according to Better Business Bureau. A woman who is 5 feet 10 inches and weighs 120 pounds has a BMI of 17.2, which is lower than 18.5 and categorized as underweight.

When Hannah was 13 years old, her model agency told her to quit gymnastics. “They pretty much told me that my legs were too big and it wouldn’t go well for me if I didn’t quit. That was when it all started,” she said in an interview, asking that her last name be omitted due to work concerns.

A year later, only 14-years-old, they put her on a strict diet and paid for her personal trainer. When she got sent to castings, companies would tell her that she could have been the perfect fit — if she only lost a little weight.

As a result of getting food poisoned, Hannah ended up being hospitalized and was only able to drink blueberry soup for a couple of weeks. The day she could go back home, she was skinnier than ever, and decided to stop by her agency to say hello. “You look amazing!” was the first words she got from her agent. She was now in perfect shape, according to her agency. Today, seven years later, Hannah still suffers from eating disorders and the feeling that she is not good enough.

“I was constantly told that I could’ve been a little smaller,” Hannah said. More than six in 10 models have been asked by their agency to lose weight, according to Model Alliance, a volunteer-run advocacy group for models working in the American fashion industry.

The requirements from today’s model agencies are unhealthy and can, in many cases, be the primary cause for eating disorders among models. They break down their confidence by telling them to lose weight and stop eating, to later admire them when they are at their most depressed and unhealthy stage of their lives. If you don’t give them what they want, they will ignore you until you do.

A countless number of women today have a dream of becoming a model. Last year, 6.65 million people sat down to watch the annual Victoria’s Secret Fashion Show to admire the beautiful, skinny, smiling women walking down the runway in sparkly wings and extraordinary lingerie. Many women, especially young girls, envy these ultra-thin models and use them as “fitspo” (fitness inspiration), without knowing the consequences that it often comes with.

Italy, Israel and Spain are some of the countries that have launched laws that requires models to show a doctor’s certificate that prove that they are healthy enough to work as a runway model (based on a BMI measurement). Two years ago, France joined the movement. “We want to combat the idea that an agency could urge a model to stop eating; for example, eating cotton balls to lose their appetite, to always lose more weight,” Dr. Oliver Veran said, a French doctor and lawmaker who proposed the bill in France. Agencies that encourage weight-loss and continue to hire “dangerously thin” models will be fined up to 80,000 euros.

The tragic death of the French fashion model Isabelle Caro was what triggered France to make the change. Caro, who released an autobiography called “The Little Girl Who Did Not Want to Get Fat,” became well-known after posing naked in a provocative advertisement against anorexia. On her blog “Anorexia or the hunger to live, take a step toward healing,” she described herself as “a little invisible snowflake in a strong blizzard who is fighting, fighting to finally live, despite years of suffering, and who is crying out to the entire world to say that anorexia is a hell from which you must escape while you still have time.” Caro died in 2010 after fighting anorexia for 15 years.

Even though there has been a big step for a healthier fashion industry, current laws do not apply to the United States and many other countries.

Hopefully, the rest of the world will adopt similar laws and the fashion industry will become a healthier and safer place to work.