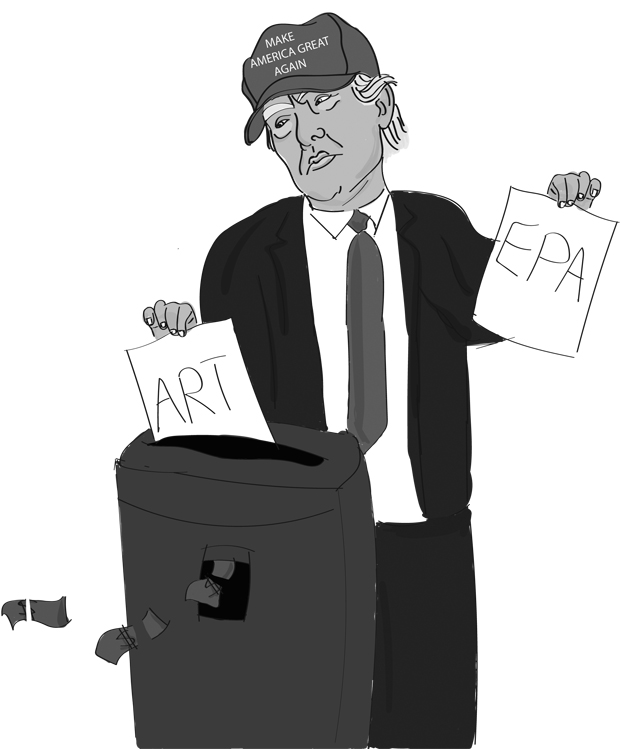 SHREDDING: Donald Trump has proposed a budget with severe cuts to arts, humanities and environmental protection while shifting funds to the millitary.

The proposal calls for steep cuts to these departments, among many others, while increasing defense funding to the tune of $574 billion.

The Environmental Protection Agency (EPA) is facing the most extensive cuts. The EPA is looking at a $2.6 billion budget slash, a 31 percent change from last year’s funding. The proposal calls for the elimination of about 3,200 staff positions, which makes up roughly 20 percent of the total work force of the agency. Funding for international climate change programs and climate change research is being scrapped entirely.

Furthermore, on March 28 President Trump signed an executive order that instructs federal regulators to begin nullifying key regulations that would curb U.S. fossil fuel emissions. Included in this order is the dismantling of the Clean Power Plan, which was enacted by the Obama administration with the aim of vastly reducing emissions from coal-fired power plants — one of the largest contributors to anthropogenic climate change.

“We’re ending the theft of American prosperity and reviving our beloved economy,” Trump said during a press conference detailing his executive order. “The miners told me about the attacks on their jobs. I made them this promise. We will put our miners back to work.”

Trump’s idea that the coal industry can be saved by extensive deregulation ignores the broader economic trends in the energy sector that have been going on for some time now.

It’s not regulation killing coal; coal jobs have been declining for decades. The decline of the coal industry is by way of the free market’s “invisible hand.” According to Ben Hasselman of FiveThirtyEight, the shift towards cheaper and cleaner natural gas, the rise of automation, and the rapid decrease in the price of solar technology are why coal is becoming irrelevant, not government overreach.

To many, Trump’s assault on meaningful climate legislation hardly comes as a surprise. Trump has often tweeted deep-seated skepticism of climate change, going so far as to call it a conspiracy theory created by the Chinese meant to undermine the American manufacturing sector, despite climate scientists from around the world vehemently claiming otherwise.

The irony of Donald Trump’s conspiracy claim is that it is actually his administration imperiling America’s foothold in the manufacturing and energy sectors. The future of energy is in the form of renewables, which is why China is vowing to invest at least $360 billion in renewable energy by 2020, according to the New York Times.

Trump’s insistence that we need to help save the antiquated and dying coal industry while neglecting renewable energy sources opens the door for China to secure its place atop the emerging clean-energy marketplace for years to come.

The NEA and NEH are federal grant-making agencies. They play similar roles, but to whom they give grants differs slightly. Grantees for the NEH primarily consist of schools, colleges, libraries and museums. Recipients for NEA, on the other hand, include theaters, art museums, community groups and schools with strong arts programs.

“We haven’t currently received any grants from the NEA at GCC,” said Dr. Peter Green, division chair of visual and performing arts at Glendale Community College. “But I’m sure some of our feeder schools have, and cuts to these grants would mean less prepared students entering from the high schools. Also, students who haven’t had the opportunity to take classes may not understand how important arts and music education is.”

The attempted assault on these organizations isn’t much of an eyebrow-raiser, as they have long been in the crosshairs of conservative politicians. The reasoning for abolishing funding is purported cost savings, an interesting proposition since they make up comparatively little government spending.

The combined funding for both is roughly $298 million, or about a fraction of a percent of the total government budget.

This source of funds is crucial for many people. Grants reach people in all 50 states, whether they are rich or poor, urban or rural, Democrat or Republican. This money supports community programs, extracurricular art and dance events for schools, and makes art accessible to those who aren’t particularly wealthy. The NEH also provides programs for veterans returning to the States, like the Warrior-Scholar Project.

“Art and music education is so important to help develop the ‘whole’ person, they are important for our emotional education.” Green said. “I feel it is very important to have a life balance —  not just math, science, but we need some art and music as well.”

The importance of such programs is, of course, lost on an administration neck-deep in anti-intellectual sentiments and which harbors such deep resentment for fact and truth.

Trump’s pick for the EPA thinks carbon dioxide plays a minor role in climate change (it is the major contributor); his appointee for Secretary of Education, Betsy DeVos, doesn’t understand the difference between growth and proficiency; and Rick Perry, Secretary of Energy, did not even understand the role of the agency until joining.

Trump doesn’t seem to be one to appreciate culture much, either.

This is a man who has an unusually light craving for reading — a stark difference from his presidential predecessor. He claims he would like to read, but he “has so little time.” That’s an intriguing claim, coming from the man who has found the time to send, on average, 11 tweets per day over his Twitter career and who reportedly loves to indulge in the excess of unabashedly partisan “news” shows found on Fox News and MSNBC.

According to the Washington Post, Trump once purchased an oil sketch painting for $20,000 at a fundraiser auction held at his Mar-a-Lago club in Florida. It would have been a nice gesture in support of the arts, had it not been a 6-foot-tall portrait of himself.

This is the apparent fundamental problem with this administration. The actions seem to be all about the narcissistic self-interests of a select few without concern for the collateral damage inflicted on the ones they are supposed to help.

The budget cuts disregard care for a fragile climate system that could have wide-ranging effects across the globe and ignores the incredible importance that the arts and humanities play in American culture.

The administration is shifting money from the beautiful, creative side of America and moving it to the ugly, bloated side: the unbridled American military-industrial complex.

With this in mind, the question to ask is: With all of this military spending, if we are not attempting to maintain our culture, our arts, and our environment, what exactly is it that we are defending?