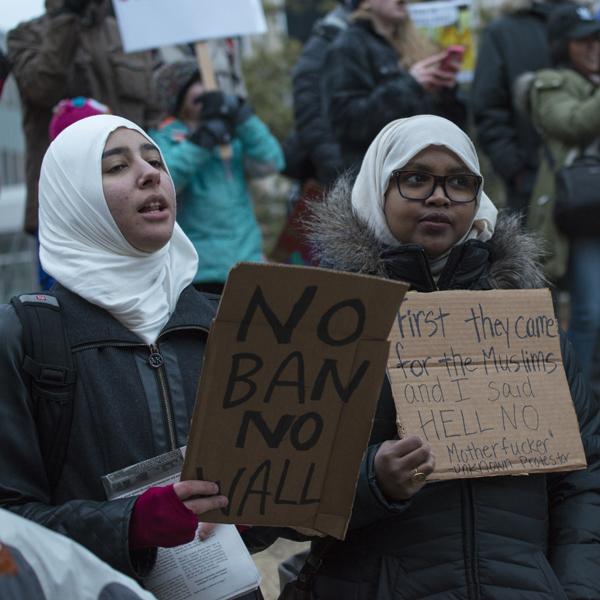 NO BAN, NO WALL: An estimated crowd of 7,000 protesters gathered in downtown Minneapolis on Jan. 31 to denounce President Trump and express solidarity with immigrants.

One of the main talking points for Donald Trump and his campaign during the 2016 election was the threat of “terrorism” posed by Muslim refugees from the Middle East seeking safety and shelter within the United States.

Like many of his other outlandish campaign promises (e.g. the wall), people wrote off the Muslim refugee ban as another piece of political rhetoric, one that Trump would abandon once elected into office.

But as we have seen thus far, Donald Trump has quickly put his money where his mouth is, signing a plethora of executive orders within the first month of his presidency, signaling to citizens and political leaders alike that his rhetoric isn’t just rhetoric.

The most controversial piece of legislation signed into action was the “Muslim ban,” the executive order that temporarily barred the acceptance of Muslim refugees, in addition to visa and green card holders, from seven majority-Muslim nations in the Middle East. Those seven nations included Syria, Iran, Sudan, Libya, Somalia and Yemen.

Additionally, the number of refugees admitted in 2017’s fiscal year was to be reduced from 110,000 to 50,000, while also establishing a new “extreme vetting” process for those looking to enter the United States.

During his press conference in January that discussed the executive order, President Trump stated that the piece of legislation was intended “to keep radical Islamic terrorists out of the United States of America.” In other words, the temporary ban was enacted in the name of national security, which begs the question: are we at risk by admitting Muslim refugees?

The answer: No, we are not at risk.

The United States has one of the most  —  if not the most  —  stringent vetting processes in the entire world for refugees.

On average, the process can take about 18 to 24 months, which includes a multitude of interviews and screenings from many U.S. security agencies, including the Department of Homeland Security, the FBI, and the State Department. Furthermore, women, children, those with disabilities, and the elderly, are given admission priority over others — especially men of “fighting age.”

“I think it is fair to say that refugees coming into the United States to be resettled are some of the most vetted individuals entering the United States,” said Vannina Maestracci, the spokeswoman for the United Nations High Commissioner for Refugees.

Additionally, refugees who are applying for entry from Syria — which tends to be the focal point in the debate about national security — often have to go through an even more rigorous screening process.

“Syrian refugees have to go through a 21-step vetting process before they are allowed to come to the U.S. It goes to three different agencies,” said Stephen Yale-Loehr, an immigration law professor at Cornell University. “I am not sure what any president could do to make it even more stringent than it already is.”

Due to this lengthy and thorough process, the odds of being injured or killed by someone admitted through the refugee program are almost non-existent.

According to statistics gathered by Business Insider, the lifetime odds of being killed in a terrorist attack committed by a refugee is about 1 in 46 million.You are more likely to be killed in a shark attack (1 in 8 million), a lightning strike (1 in 174,000) or even a regional asteroid impact (1 in 1.6 million).

According to a report by the Cato Institute, there have been zero instances of terrorist attacks on American soil committed by citizens of those six nations that were included in Trump’s executive order from 1975 to present day. In light of this information, what exactly are we protecting ourselves from?

Not much. The protection offered by the Muslim ban is nothing more than an illusion. A great deal of Americans have a preconceived notion that Muslim immigrants are inherently more dangerous than others. We are easily able to conjure up images of deadly terrorist attacks in our mind, distorting our impression of the likelihood of such an event actually occurring, something that psychologists refer to as the availability heuristic. This ban makes us feel safer, while the statistics say otherwise. In other words, the ban — which has real, lasting damage on actual people — protects us from our biases, not reality.

We cannot let our irrational biases get in the way of our moral and ethical obligations as well as our long-standing tradition of accepting refugees. The stakes are simply too high.

Thousands of innocent people are fleeing war-torn nations such as Iraq and Syria. Iraq has been ravaged by ISIS, which seized the power vacuum left behind from the Saddam Hussein regime, while Syria has been decimated by a brutal civil war. It’s an international humanitarian crisis, which we certainly played a role in creating, and turning our backs now is an exercise in returning to the mistakes of the past.

In 1939, 900 Jews fleeing Hitler’s Germany were denied entry into the United States, due to the fear that they were Nazi sympathizers or Communists. Over a quarter of them ended up dying in the Holocaust.

Since then, America has chosen to do its part in accepting refugees escaping violence, including those from Vietnam, Cambodia, the Soviet Union, Kosovo and Iraq, among others.

What we are experiencing today is just the modern-day iteration of past humanitarian issues, and thankfully many Americans are rising to the occasion.

Federal judges, claiming that it could cause irreparable harm to those affected by the ban, temporarily halted Donald Trump’s executive order. Lawyers working pro bono, civil rights groups, congressional Democrats, and thousands of protesters from around the nation, played a pivotal role in the reversal of President Trump’s order.

Although, according to multiple news outlets, including the New York Times, on Monday the Trump administration released an updated version of the ban. The newer legislation appears to be very similar to the one from January, with a few minor adjustments to critical portions.

It now only includes six of the originally seven banned nations, with Iraq no longer being listed. The provision that banned current visa holders in the original legislation has been removed and Syrian refugees are now subject to a 120-day ban, rather than one that is indefinite.

It appears that this version of the ban was updated by the Trump administration so it could hold its own in court against federal judges, unlike the previous one that was struck down somewhat quickly. This means that the fight being waged by those in defense of Muslim refugees isn’t quite over yet—and it might get significantly tougher.

As Americans, we must do our part in alleviating this humanitarian crisis. If we are to stake our claim as the greatest nation on the planet, then we must step up to the plate and lead by example. It’s our obligation. It’s the American way.