It Ain’t Swede: An All American Feast with a Big Gravy Issue 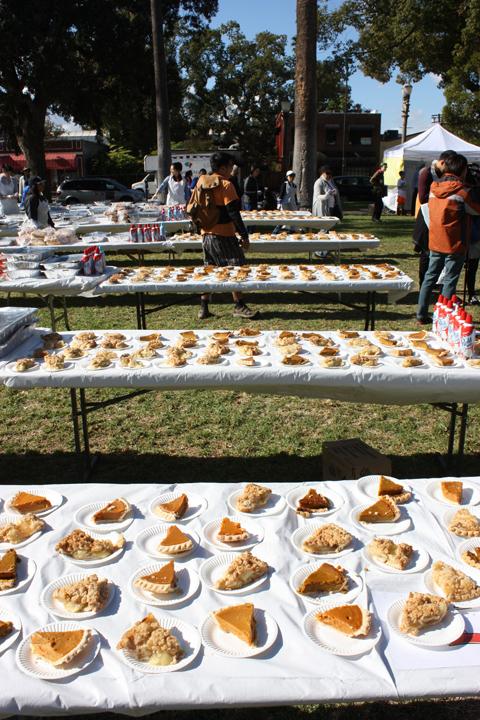 Thanksgiving is coming up, a holiday we Swedes don’t celebrate. But last year I had an assignment for my photojournalism class and wanted to feature it on Thanksgiving. After looking at a few different events, I decided on Dinner in the Park 2015 in Pasadena, which was hosted by Union Station Homeless Services.

The event started at lunch so we got there an hour earlier to look around and take some pictures of the location and the volunteers before the service. There were many volunteers who had set up eight tables for just food and dessert, and more tables filled with refreshments. The event planners filled the park with music going on the whole time and Pasadena Mayor Terry Tornek made an appearance sharing his appreciation for the event and the city. The place filled up with people and the line for the food grew extensively.

Let’s talk about my food experience that day. The food section had, what I think is the most traditional Thanksgiving food: mashed potatoes, corn, cranberry sauce, gravy, turkey, stuffing, and both apple and pumpkin pie with whipped cream for dessert.

Since I haven’t tried all of it, I took a little bit of each, and I came to the cranberries. In Sweden we have something called lingonberry jam, which looks exactly the same as cranberry sauce (you get it with Swedish meatballs at IKEA), and in my Swedish brain for a second I actually believed that it was lingonberry jam.

Let’s go back to the story, shall we. So we sit down on the grass and I try the mashed potatoes and gravy, it was so good. Then my Swedish taste buds were going to try turkey with a little stuffing. Well… The turkey was good anyway. But I wasn’t giving up, maybe I needed one more bite so I added some (what I thought) lingonberry jam to my stuffing fork.

In that small moment when the fork hit my mouth I realized that it wasn’t lingonberry jam, it was something so sour and the opposite of what I thought. I can admit that I made some faces, but aren’t you doing the same when you eat it? And the stuffing, what is up with the stuffing. Do people actually eat it or is it just something people have just because it’s tradition? I can’t put my finger on what it taste like. Bread mixed with something and well, sorry all American people, but that wasn’t good. Maybe with a different recipe, but if that was the best, then stuffing is a no for me.

Also America, again with the gravy ON the bun. Why people, why? Gravy should be on the turkey and mashed potatoes and the bun should be on the side. On the side, not in the gravy so it gets all mushy. I think we covered this already in my older columns.

But regardless of my cranberry incident, it was a good experience to see how one event could bring so many people together, and I’m so happy that they could feed so many homeless people.

The event has been going on for the past 45 years. They also have Christmas Dinner for the homeless every year. And anyone can join and request to be a volunteer at their webpage (www.unionstationhs.org). As a volunteer you will help with setting up the table and serving the food or refreshments. You do so “little,” but for all the people there it means so much.

The first time I got here two years ago, we drove from the airport to our hotel, and I saw so many tents filled with people, and some were lying on benches all around. I know Los Angeles is a big city, but there were so many homeless people.

Everyone, from volunteer to homeless were smiling and looked like they had a good time. The sun was shining, there was good food, music and so many people with different stories coming together for one day. This one day that was set up just for them.

And I just thought that this is what Thanksgiving really is about. Being thankful for your life, the good and the bad—at least you are alive. So I’m not gonna mock you in this column (except for the bun and gravy, but you know why) instead I’m going to say that I wish we could have this back in Sweden because it’s a very nice concept. Have a great Thanksgiving and maybe I’ll see you in the stores on Black Friday when you shop your food weight away.