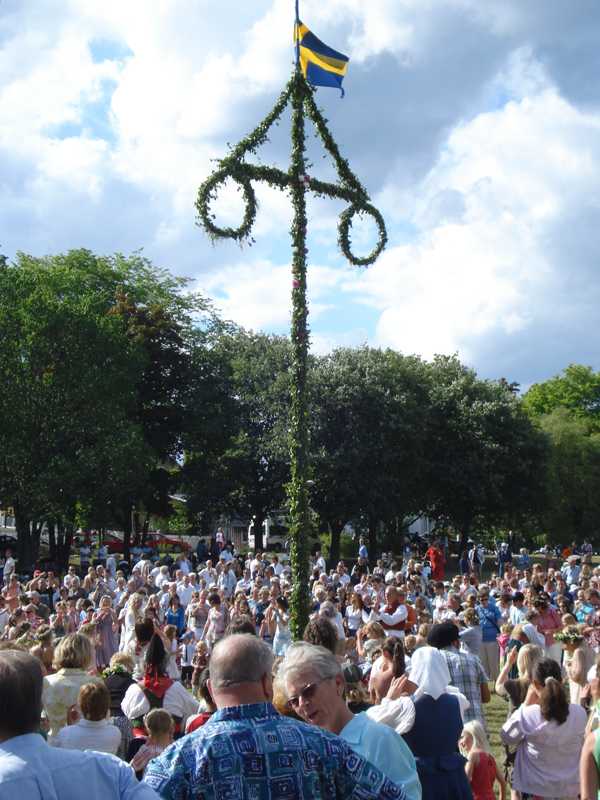 MIDSUMMER: Swedish people dance around the Midsommar Pole, decorated with flowers and greenery. The tradition is similar to the Maypole in the U.S.

Hello again, last semester this column was launched to point out some differences between the way things are done here and in my country of Sweden. Things like what to say or not say to a Swede, what kind of food we think is weird, and the differences in the weather. For those who were following, and anyone new onboard, we now continue on the path to make you fully Swedish. Here I will teach you about traditions.

In Sweden, we celebrate a few of the traditions you have here, like Halloween, Christmas, New Year’s Eve, Easter and Valentine’s Day. But our ways of celebrating may seem strangely different.

There are few things we do on almost every holiday. We drink schnapps (a small shot of a strong alcoholic beverage) on Christmas, Midsummer and Easter. Meatballs, mini-sausages, herring, eggs and salmon are standard on these days. The only change is that we have a Christmas ham, Jansson’s temptation (potatoes mixed with onions, anchovies and cream) and ris á la Malta (Christmas porridge.) When we talk about herring, we don’t talk about one or two different herrings, we talk about endless choices. It’s almost like we have as many choices of herring as you have Oreo flavours.

Valborg: (Walpurgis Night) April 30 is the day when we welcome summer by lighting huge bonfires all around the country. The entire city comes together and celebrates together. Since the next day is a public holiday in Sweden, people usually use Valborg as a day to throw a party. In Landskrona (my city) we also have the fight between representatives of summer and winter. Two people on horses will ride against each other with a sort of sword to see who wins, and of course, the winner every year is summer.

Midsommar: One day in late June, we get together with our families and/or friends to celebrate John the Baptist’s birth. It’s said to be the day where we Swedes drink the most alcohol. On this day we make our own flower wreath to put in our hair, we then collect seven different flowers and put them under our pillows because then we’ll dream about the person we will spend the rest of our lives with (I’m still waiting for you Channing Tatum). Maybe the part that sounds weirder than that is, we cover a pole, called midsommarstång, with leaves and flowers, then we dance around it and sing about little frogs, sleeping bears and foxes. On this day we eat a lot of herring, but the food that is most associated with midsummer is nypotatis (the first potatoes from that year’s harvest) together with sour cream and chives. For dessert, there are fresh strawberries. We always try to be outside no matter what. But like I said in an earlier column, Swedish weather cannot be trusted.

Advent: Every Sunday in December we will light a candle, usually we have an advent candlestick with four candles, one for each Sunday. I don’t really know why we celebrate it but we start preparing for Christmas on the first Sunday.

Lucia: On Dec. 13, children will dress up as little santas and gingerbread men, and one girl gets to be Lucia, which means that she will wear a long white dress and candles in her hair. Then all of the children, with Lucia in front, will go in a Lucia train and sing traditional songs. On this day we also bake Lussekatter (saffron buns), gingerbread and drink glögg (mulled wine.)

Christmas: Here in the states you celebrate the holiday on Christmas Day, but we Swedes can’t wait that long to open our presents, so we celebrate on Christmas Eve instead. On that day, children (yes, on Christmas I am still a child) get to open one present when they wake up. Then at exactly 3 p.m., the family gathers around the TV to watch “Donald Duck and His Friends Wish You a Merry Christmas.” It’s a collection of old Disney shows from the last 60 years, such as Robin Hood, Mickey Mouse and of course Donald Duck. The show is the same every year, except that it always ends with one or two new Disney movies. After Donald Duck it’s time to eat julbord (Christmas food table) and then it’s time for the moment everyone’s been waiting for, the presents. In Sweden when it’s time for the gifts, one person says that he or she’s going out to “buy a newspaper” and then comes back dressed as Santa and gives everyone their presents. On this day you’re also allowed to eat from the lower layer of the Aladdin and Paradis box (popular chocolate boxer during Christmas) without anyone complaining.

We also have a big issue in Sweden, one of the biggest questions that comes up every Easter and Christmas is about the two beverages we have, påskmust and julmust. The drink is a sort of soft drink that we associate with these two holidays. But to the big question, are these two beverages the same thing but with different labels? With that question you will see our country split, some say yes, it’s the same, but some, like myself, say that it’s not the same thing and it doesn’t taste the same. No matter how much research people have done, the country will still be split. But if you are wondering which one’s the better choice, you can never go wrong with a bottle of julmust.

These traditions are the most important for us Swedes, and of course we have Halloween, Easter, New Year and others, but it’s very much like yours except we don’t go all in with decorations like I’ve seen here (some people do, but not the most part). But to summarize, we can’t wait one more day to open our Christmas presents, we love to eat the same food a lot, we love to drink both alcohol and julmust and we dance around a covered pole while singing about animals. We are normal people too, I promise.