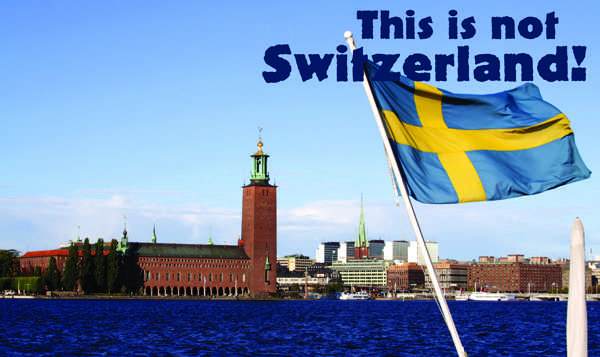 It took me a while to get used to the transition from Sweden to the United States. There is the obvious change in weather and language, but there are also a few unwritten rules that everyone follows, making for a completely different lifestyle.

In Sweden one never stands too close to anyone else while waiting for the bus/train. We take personal space very seriously. The only exception is if you know the person. Also, while on the train/bus, you don’t sit next to a stranger … you find an empty seat somewhere else, and if there’s no room then you stand up.

I was taking the bus from Burbank to Glendale and sat by myself (with my headphones plugged in, minding my own business) when all of a sudden a man sat down next to me. Literally right beside me — shoulder to shoulder. I was shocked because there were so many free spots on the bus. Not only that, but he also talked to me, making comments about the weather, which I wasn’t used to.

We also don’t smile or wave to strangers in Sweden. Apparently they don’t in Europe either. When I was in Germany for the World Cup in 2008, my friend and I sat at an outdoor cafe. We waved at people in passing cars when suddenly a driver looked at us and crashed into the car in front of him as he waved back. Whoops!

If you were to wave to someone in Sweden (something I do for fun) they sometimes wave back, but then they’ll go the rest of the day wondering who you were and why you waved at them. Since strangers don’t wave at each other, they worry it was someone they knew, but didn’t recognize.

America is different though. When you go into a store or pass by other pedestrians, they almost always say “hello, how are you?” When I first came here I would answer with “hi, I’m good and you?,” but I never got an answer back so I’ve learned to only say “hi” and keep walking, without offending anyone.

But when I was at the airport in Denmark trying to get my bags from the conveyer, a guy ran past me and bumped into me so one bag almost fell. Do you think he said anything? No. Do you think I said something? Well, of course I did. I said “sorry” to the guy that pushed ME.

Speaking of Denmark, when you live in Skåne, the southest part of Sweden, you get called Danish by the rest of Sweden. It’s not an option, it’s just like that. I think we can compare Skåne with Texas in the United States. We speak a little different, but we are still cool, you know.

So we don’t need people from the US telling us that they compare us to Danish people or even German like a friend once did. She straight up said that Swedish sounded like German. GERMAN? That’s like a whole new level.

It’s not that we don’t like Danish or German people, we just don’t want to be compared to them. And, don’t think that all Swedes are blond and blue eyed, because we are not! Well I am, but that’s irrelevant.

And on that note, I’m talking about Sweden, NOT Switzerland. Everyone seems to mix those up, but the only thing that we have in common is that we both start with “S” and “W.” Nothing else!

When you say Sweden to a person, some will actually say “oh the country with the cheese and Alps.” Well we have cheese, very good cheese if you ask me, but the only Alps we have is in Kiruna or when it’s been snowing and you make your own Alps in your garden. But I don’t think that’s the cheese and Alps they’re referring to.

You never say no to Fika. That is one of the most holy things we have. Fika is a combo of coffee and a sweet or cake. You can have fika anytime you want, between breakfast and lunch? Of course! After lunch? Well yes! After dinner? Yes! In the middle of the night? If you are awake at that time then why not?

During my year here in California, I haven’t had fika once and when I pass people I say “hi, how are you?” and walk away without bothering to listen if someone answer me back.

I always say “sorry” to almost everyone, even if I don’t do anything. I’m breaking all the unwritten Swedish laws. I even stand close to people when I’m waiting for the bus/train.

What is happening to me?