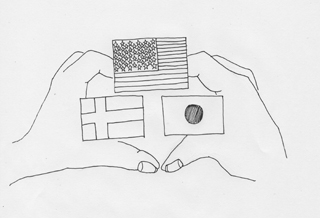 When asked what it is like to date in Southern California, several things come to mind.  It is not an easy question to answer. After reminiscing about dates from hell and visiting ghosts of relationships past, a few things can be said: dating, like everything else in life, is full of trial and error. It comes down to sticking around long enough to experience what’s underneath the layers of persona created for reasons unknown.

The dating culture in SoCal is something of an anomaly. People from all over the world are drawn to the beautiful weather, enticing aroma of fame and ample opportunities to leave their former lives behind and start anew, which means the cities are a melting pot of backgrounds, races, ethnicities and ideologies.

Transplants, as they are called, walk the streets, bringing their previous lives here to share.  It is exciting to meet new people, with new perspectives and interesting stories from their motherland.

Cities like Los Angeles are known for dating horrors partially because of this transplant culture. With the meshing of their former lives intertwining with the culture of the city, a new hybrid is born: one desperately trying to hold on to what their mamas taught them while seeking out new identities.

L.A. carries a heavy stigma when it comes to dating, and for good reason. LaLa Land is crawling with beautiful, insecure people.

Models, actors, musicians, you name it, posing as one thing and trying to fit into a culture that existed long before them, where movie stars were untouchable, god-like creatures.

Wanna-be’s mastering their image and status while forgetting to nourish their inner beings, the very thing that is necessary in finding a good, solid, lasting relationship.

When I first met “Steve,” I was drawn to his edgy style and unique, ambiguous persona.  He could pick up a guitar and play any tune.  He read all the greats —  Bronte, Beckett, Faulkner, and could carry on a conversation about anything.  I could not put him in a box, and I liked how he would come and go on a whim.

As we drew closer as friends, we began opening up to one another, letting our guards down.  The more he divulged, the more attractive he became, until one night, when he revealed too much of himself — his fears and inadequacies — and retreated back into the guy he wanted to be.

It was too late. I had already seen the real Steve, the lost boy from Minnesota who left home three years earlier after finding out his real dad, whom he never met, had died.  In a vulnerable moment, he shed the skin of someone he badly wanted to believe he was, leaving in its place the fragmented life he desperately wanted to forget.

I never heard from him again.

It is a vicious cycle of wanting something real, but not willing to be true to oneself.  It is easy to be whoever you want to be when no one knows who you are, where you’re able to build a persona out of thin air, tailor-made to your surroundings.

Soon, an “eat or be eaten” attitude creeps in, and the walls begin to form to protect the doe-eyed naivety that once existed before crossing state lines.

In the beginning, a copper tan, manicured nails, stellar wardrobe and an impressive resume of “who you know” are enough to get a foot in the door.

However, once the novelty wears off, and you roll over to see truth lying on the pillow beside you, baring their naked soul without a persona to fall back on, one can either flee the scene or delve into the make-up free reality staring you in the face.