There is Always a First Time: Thanksgiving in America 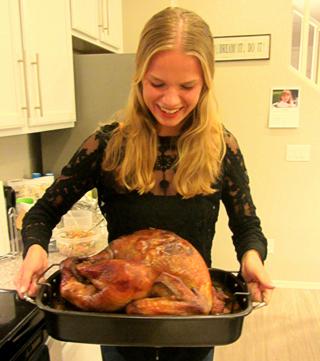 Thanksgiving is a time when the sound of gobbling turkeys is replaced by Americans gobbling up as much food as their stomachs can take. It is also a time for Americans to express thanks over what they have, only to rush out the next day to purchase discounted items they didn’t  have.

Clueless as I was, as a Swede in America, I had booked a flight ticket to Phoenix, Az. to see my American relatives on Thanksgiving, which is supposed to be a big “thing” in America. However, it was not until the day before that my friends warned me about the busiest travelling day of the year.

As I headed off in a yellow cab at 8 am last Thursday, confident that I had a lot of time to spare, Talkradio 790 KABC announced an expectation of two million people travelling through LAX on Thanksgiving, which is when I felt my blood pressure rise.

Airport personnel were prepared for chaos and got me through check-in quickly, leaving me with about four hours to reflect on my thankfulness.

When arriving at the house of my uncle and his half-Swedish, half-American family, I was faced with a loud yet warm welcoming, with lots of hugs and kisses from everyone except 2-week-old Kyle, who did not have the decency to get up from his boppy pillow.

In Scandinavia, a holiday welcome drink of warm, mulled wine is typically offered; however, in Phoenix, I received something cold, white and too thick to drink — something called eggnog.

After asking around to see if anyone actually enjoyed this drink, I realized it had more to do with tradition than taste.

Although I am aware that eggs take all eatable forms on the American menu, drinking it was just wrong and spoons full of sugar did not make it any better.When dinnertime approached, I was both overwhelmed and pleasantly surprised by the massive amounts of food and tasty combinations of potatoes, stuffing and of course, the all-famous turkey.

Who knew that stuffing was made of breadcrumbs?

Everyone brought their share to the table, except me, who never got the memo.

It almost seemed as if food was a way for everyone to express their generosity and thankfulness to the party hosts. This, of course, lead to piles of food remaining untouched and left over.

When everyone was satisfied and full, another majestic 20-pound-turkey was brought out of the oven, leaving them with food to last them to the end of month, which to me seemed intentional — I mean, it had to be.

There is a Swedish concept called “lagom” that means “just about enough.” From a 10-month-experience in America, I have noticed that nothing can ever be too much, especially when it comes to portions of food. It is almost as if there is a constant concern that someone might not be full after dinner, which also seems to be every grandmother’s worst
nightmare. No pressure there.

After a delicious dinner and a great night, everyone went into a stage of foodcoma, except 11-month-old Emmett, who ran around chewing on everything within his 3-foot-reach.