Ain’t it Swede: Downfall of the Gentleman 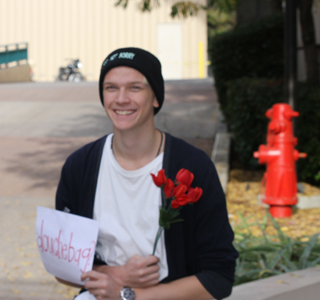 The breed of the gentleman can be compared to that of the tigers — nearly extinct and rarely seen outside the movies, as modern dating has turned them into impatient, objectifying and self-centered douchebags.

I was raised with the notion that being a gentleman is the key to dating, whether it is offering to pay for meals during dates or not rushing courting by sending a text message every five minutes to make your existence known.

However, it seems like the gentlemen ideal is less revered nowadays, as modern daters focus more on looks and success rather than personality, actions and personal chemistry.

In addition, apps like Tinder and Badoo kill the idea of prolonged traditional courtship with the swipe of a finger, making people impatient and shallow.

To be honest, my narcissistic side took on a bet with my roommates that I could get more than 50 “Tinder-swipes” in one week.

After only getting six swipes in six days, I realized I was going to lose the bet. In a rage, I removed the application from my phone and never looked back.

I do not have the right to deem anyone a gentleman, since the bet was anything but gentlemanly.

Still, from time to time, when my courage fails me and I lose my nerve to ask girls out, I ensure myself that my passiveness is the way of a gentleman. I tell myself it is interruptive and rude to go up and strike a conversation out of nowhere, with the goal to get a number.

Instead, I tend to hope for women to approach me instead, but this rarely comes true.

Gentleman or coward, I truly believe my passiveness has often prevented me from making a complete fool out of myself.

I have heard and witnessed a variety of pickup attempts from people who are not so passive, some stretching from creepy to downright painfully embarrassing and desperate.

In one instance, I witnessed a man approach a woman he had never seen before and tell her that she was the girl he had seen in his dreams.

The most dramatic attempt I have ever heard about was a man who attempted a Hail Mary pass, when he tried jumping into a moving car to “score” his woman of interest.

Then again, I am no saint and I also have embarrassing moments in my past.

For example, when I was still a high school student in Sweden, I asked my friend to be my wingman. He told the girl I was interested in that I rescued him when he went through the ice covering a local lake, pulling him out of the freezing water and saving his life.

Despite this detailed story, it took her less than a minute to call us out and judge us as phonies.

From time to time, we are all impatient, objectifying and self-centered, using bad pickup lines as a way of courting. However, what I find different when I compare Swedes and Americans is that the latter are more straightforward when it comes to dating.

Like myself, many Swedes have no greater fear than defeat, and maybe this is the reason Sweden has not been in a war for more than 200 years.

This fear is clearly seen within dating. We tend to reason that if you do not try,  you cannot fail, leading many Swedes to behave passively.

For example, in early stages of dating, I subtly try my chances surrounded by a larger group of friends, working up the courage to actually ask the person out. If it does not work, I can claim that it was nothing more than an attempt to befriend someone new without any romantic agenda.

Americans seem to have a more “no guts, no glory” approach to dating, where asking someone out is not another giant leap for mankind and rejection does not scar you for days to come.

However, there is a clear difference between courage and straight out sleaziness. Using cheesy pickup lines like “I saw you in my dream” is insulting to any woman’s intelligence and jumping into passing cars is downright creepy.

What happened to the men who dared ask women out, and won their hearts by treating them with respect and dignity? Why do more and more men refrain from holding doors open for women yet rip up doors of moving cars in desperate attempts to get lucky?

Moreover, what should we do to revitalize the gentleman standard?

We should stop mimicking each other, as the manly ideal seems to be “the more arrogant the better,” and instead create a higher standard.

This way we can reverse the ongoing trend and reinstate the importance of being a gentleman.

Gentleman or not, I pride myself in doing my best to live up to the ideal, instead of making my way through life as a douchebag.