Halloween is More than Kids and Candy 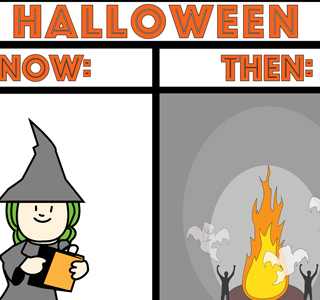 Halloween is the time of year for trick-or-treating, horror movies and, in the spirit of good fun, traumatizing susceptible individuals with scary masks.

However, few people who celebrate Halloween actually understand the history behind it. This widespread ignorance has caused many to denounce the holiday as one of devil-worship when, in reality, Halloween is a fusion of pagan and Christian holidays that celebrated the dead and aimed to ward off devilish spirits with bad intentions.

According to a BBC report, Halloween derives from the Gaelic celebration of Samhain, a festival that marked the end of the harvesting season and the beginning of winter, which brought along with it colder, darker days and nights. It was also believed to be a time when the veil between the living and the dead was most thin, and so spirits could return to their family homes.

In “Halloween and Other Festivals of Life and Death,” author Jack Santino states that the Gaels could have lit fires for either protection from spirits and good fortune, or to actually light the way for them. They would leave food and wine on their doorsteps hoping the ghosts would not bother them and they would dress up in masks to ward them off.

Samhain is believed to have heavily influenced the Christian celebration of “All Saints Eve” or “All Hallow’s Eve,” during which feasts were held in honor of the dead, including saints and all who died faithful to Christianity. Santino notes that when the Catholic Church converted the Gaels to Christianity, they encouraged keeping elements of the original faith and culture to make the transition to a new faith smoother and more likely.

Hence, many of the practices during Samhain were weaved into All Hallow’s Eve, which was celebrated on Oct. 31, the start of Samhain. Some of these traditions included guising, where people dressed up in costumes to dispel evil spirits, and sang, danced, told poetry, and exchanged jokes in return for food, money, or wine.

Halloween today is less about celebrating the dead and more about having fun and playing into the capitalist machine. According to an annual survey by the National Retail Federation, Americans collectively spend around $6 billion on Halloween every year as they buy costumes, decorations and candy.

However, it certainly is not about worshipping the devil as many presume to believe. No doubt pop culture today purports that belief, as gory, supernatural horror movies and spooky stories help associate Halloween with only evil and violence.

It is definitely a holiday that should be taken lightly and in good fun. A simple holiday that is celebrated with some scary movies and costumes should not be denounced as evil and devil-worship, particularly when it has such a long and illustrious history behind it