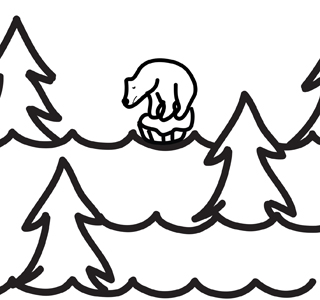 Polar bears floating on chunks of ice as cubs are separated from their mothers is the typical guilt-inducing image that comes to mind when reminded of the planet’s melting ice caps.

In 2007, former United States vice president Al Gore addressed the reduced ice in a speech that declared the North Pole’s supply would completely diminish by 2013.

Although the North Pole is not completely “ice-free” like he predicted it would be, the melting is occurring rapidly. According to NASA, arctic sea ice levels have reached their sixth lowest level since 1978. Furthermore, according to Walter Meier, a NASA research scientist, the summer season ended with below-average sea ice, and because the ice is so thin, it is more likely to melt.

Meier also stated that, even though sea ice over the summer covered a greater surface area than it has in the past two years, this does not mean that the arctic regions will be restored to healthy conditions.

Marla Conti, a physical geography professor, said that the effects of climate change are more drastic in the Arctic than anywhere else in the world.

“The glaciers are rapidly receding and disappearing,” she said.

According to a 2014 European Geosciences Union report, Greenland’s ice volume alone is diminishing by about 375 cubic kilometers a year.

The dwindling ice levels present a domino effect of problems. The melting of the polar ice caps results in higher, warmer sea levels, which intensifies storms like tsunamis and hurricanes. The Environmental Protection Agency reports that, in the past 100 years alone, the average sea level rose by around 7 inches.

Most scientists agree that humans are responsible for global warming and climate change, which cause the melting of polar ice caps. Fossil fuels like coal and gas, which society is heavily dependent on, intensify weather patterns and accelerate global warming, as greenhouse gases like carbon dioxide trap heat into the atmosphere.

Although the increased use of fossil fuels and the consequences this has on the planet is a manmade problem, public figures like Donald Trump perpetuate a denial culture by claiming global warming and melting ice glaciers are “bullshit” simply because certain parts of the world are experiencing colder temperatures.

What Trump may not realize, however, is that global warming causes global climate change, meaning the temperatures in different parts of the world reach extremes. For example, certain regions may face heavier, more dangerous blizzards as a result of rising and warmer sea levels, while others may undergo heatwaves that increase wildfires and droughts.

Such ignorant comments by public figures are dangerous and reckless. They create an illusion that the risks of global warming are inflated, when, in reality, both the planet and its inhabitants are facing climate changes that can alter life as they know it.

Government officials and people in the public eye whose words hold a lot of weight in mass media should be more responsible with the statements they make. Many people, when they see a successful billionaire like Donald Trump denounce the effects of global warming, assume scientists are inflating issue and trying to wreak havoc.

However, evidence, such as the melting of the caps, rising sea levels, and intense weather, is on the side of science and society should take care to notice and take action.