D’Antoni Proves His Worth 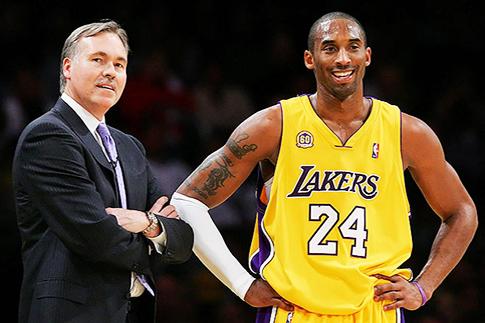 Do not worry Lakers’ fans, Mike D’Antoni is the right man for the job and will take the team to the playoffs.

Although fans were disappointed to hear that Phil Jackson would not be returning to coach the Lakers after Mike Brown was fired, they don’t need to panic — the Lakers are still a successful team.

Brown was surprised to hear that he was being fired after one of the owners, Jim Buss, told him the night before that the Lakers were behind him 100 percent.

Some thought that the firing so early in the season (after his fifth game) was a bit premature, comparing it to firing a NFL coach 10 minutes into the first quarter of the first game, but the Lakers organization didn’t want to risk keeping him as the head coach. The organization was so committed to firing Brown that it did so before it knew who was going to replace him.

Two days after the Lakers fired Brown, they hired D’Antoni.

If the hiring of D’Antoni had been seen as replacing Brown, fans would have been overjoyed to learn that the Lakers would once again be a successful team. However, the Lakers made the mistake of leading fans to believe that D’Antoni would be taking Jackson’s job.

The Lakers reportedly told Jackson that the job was his if he wanted it, but never offered him a formal contract. The management of the team most likely leaked that Jackson was a contender in order to appease fans.

When the Lakers announced that they had hired D’Antoni, fans were outraged that the “Zen Master” would not be returning to the Lakers and were angry with D’Antoni for supposedly taking his job.

Jackson might have been a poor choice for coach anyway. His triangle offense worked for the Lakers in the past, but it is too similar to the variation of the Princeton offense, which Brown tried using at the beginning of the season.

Jackson may not have even returned the team to its golden days. He would only be working with five players that he had coached in the past, three of which played for a short time under Jackson.

While the fans were dismayed by D’Antoni’s hire, the team was optimistic and looked forward to working with him.

Two of the team’s leaders, Kobe Bryant and Steve Nash, both worked with D’Antoni before and were excited to work with him again.

Before he ever coached the team, D’Antoni had the players’ respect, which Brown never gained.

The Lakers proved that their defense is still strong after the first game that D’Antoni coached on Nov. 20. The Lakers beat the Brooklyn Nets 95-90 and defended extremely well in the second half, only allowing the Nets to score 33 points.

The team then lost the next two games to the Sacramento Kings and the Memphis Grizzlies. The Lakers lost because they are becoming more comfortable with D’Antoni’s aggressive offense. D’Antoni’s only worry that he had at his first press conference as the Lakers head coach started to come true. The team is trying to play catch up, doing what they should have been doing during training camp.

D’Antoni said that the reason why they lost was because of the lack of energy on the court. This is mainly because Pau Gasol and Dwight Howard are not familiar with such a fast-paced game.

On Nov. 24 the Lakers beat the Dallas Mavericks 115-89 in their first road victory of the season. Howard became more comfortable with D’Antoni’s coaching style, however, Gasol had not. Thus, Antawn Jamison played more than Gasol. The combination of Howard and Jamison proved to be more successful than Howard and Gasol. Jamison ended the game with 19 points and 15 rebounds. The Lakers held the Mavericks successfully and forced them to only shoot 37 percent, compared to their average 45 percent.

The Lakers scored 17 out of 33 three pointers, a 52 percent shooting percentage versus the 30 to 35 percent average. Howard finally played like he did before he hurt his back last year. He became comfortable in D’Antoni’s offense and scored 28 points with 20 rebounds. Bench players Jamison and Jodie Meeks played extremely well because of the free flowing offense that D’Antoni runs. Jamison was the leading scorer of the game, scoring 33 points with 12 rebounds and Meeks scored 21 points in the 17 minutes that he played.

It will be interesting to see how the now fast-paced offensive team will fare against the other playoff teams, since traditionally the teams that make the playoffs play a much slower game. One thing is clear: the Lakers under D’Antoni’s leadership will continue to be successful and will make the playoffs.