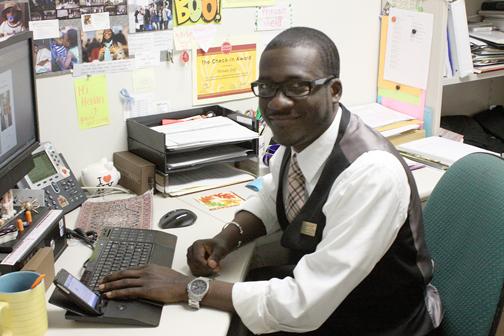 For outreach coordinator Henan Joof, the economic issues affecting Glendale College today are reminiscent of those during his time as ASGCC president in 2003.

“It was the same situation; we had just changed governors, Gray Davis had been kicked out and Arnold [Schwarzenegger] had taken over, and as a conservative he wasn’t open to increasing taxes,” said Joof.

The college’s responses to the economic shortfall were similar back then as the ones put in the recent years – reduction of courses and reduction of semesters.

“Right now we’re looking at fewer offerings and that there’s no winter, there’s no summer – it was the same issue then,” said Joof. “We had two summer sessions, so we were cutting one of the summer sessions, no winter session. In excess of 100 classes were being lost per semester.”

To counter the cuts, Joof led the ASGCC in events such as fundraisers and political actions to raise both awareness and funds. Actions included marches and lobbying in Sacramento and protests in Pershing Square in downtown Los Angeles, and fundraisers included a teacher-student basketball game as well as a temporary increase in student fees.

“Basically we put it to all the students on campus that we would increase our student services fee by $5 for the next two years and that extra $5 would go directly to paying for the classes as well.”

The college found itself in an interesting situation – the passage of Measure G in March 2002, a bond measure to fund reconstruction and development at GCC, gave the college $98 million to spend.

“When you write a bond measure you actually tell them about what exactly you’re going to spend the money on. So prior to 2003 (which is when the budget cuts happened) we told them we wanted to build a parking lot, a new sports field, a student services building, a health center building,” said Joof. “Those were all things that we put in our plan.”

However, that money couldn’t be used to alleviate the budget cuts.

“Now that we had gotten the $98 million we couldn’t switch to something else. We couldn’t even use it to pay for classes; it had to go to those things. So we found ourselves hitting on a lot of money that we couldn’t spend on classes that we actually needed.”

Despite the cuts, Joof’s actions were aimed at making sure students could continue to receive an education.

“A lot of our focus was feeding that basically making sure that … students were able to transfer and get their classes they needed, because we were in the same situation that we are now.”

After earning an associate of arts degree from GCC, Joof transferred from GCC in 2004 to Cal State where he earned a bachelor’s in economics in 2006. He worked at CSUN in the student development department after graduating until Jan. 2007, when he came to work at GCC.

“My experiences in student government made me want to give back to Glendale College because I realized that not everybody takes advantage of their college experience,” said Joof. “I wanted to find a way to make that feeling more available to students.”