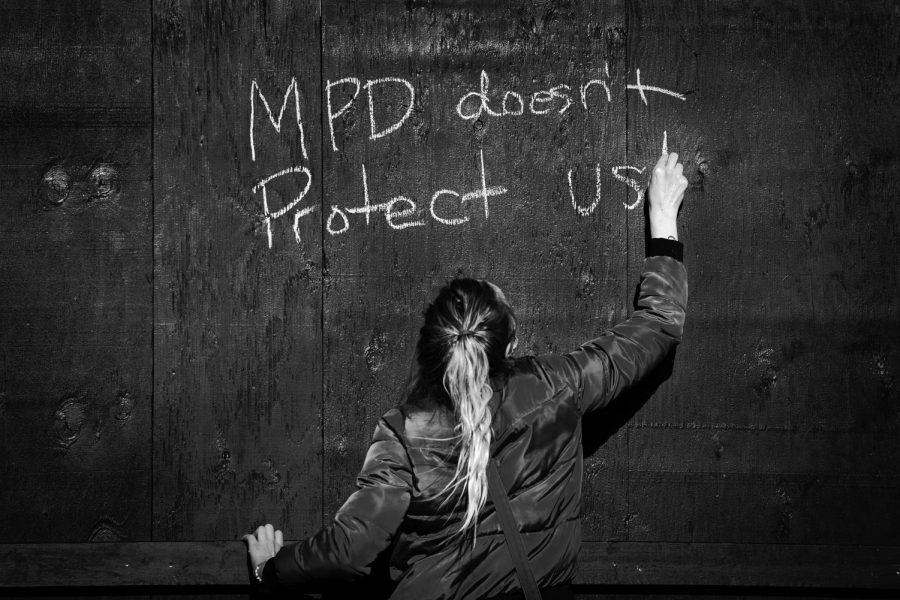 A protester writes 'MPD doesn't Protect Us' in chalk on a boarded up building near the Hennepin County Courthouse in downtown Minneapolis, Minnesota as the trial of former Minneapolis police officer Derek Chauvin began Monday morning.

A police officer has been found guilty of unjustly killing a Black man. Does that mean that fewer Black people will meet similar fates at the hands of the police?
Former Minneapolis police officer Derek Chauvin faces up to 40 years in prison for murdering George Floyd last Memorial Day weekend.
Such results are rare in cases where police kill unarmed civilians. That Chauvin was held accountable has been credited mainly to a bystander video of Floyd’s arrest that was seen worldwide.
There are reasons for pessimism. Many argue that institutional racism is the root cause of many killings of Black people by police and that racism will not evaporate in the wake of a single guilty verdict.
And too many police officers are willing to back up a fellow officer, regardless of the facts. Many others in America stand by the belief that Chauvin did nothing wrong in kneeling on the neck of the nonresisting Floyd for nine-plus minutes.
If civilian deaths at the hands of police decrease over time in this country, the credit more appropriately would go to the ubiquity of recording police-citizen interactions rather than to the punishment of a single bad actor with a badge.
We haven’t had to wait long for new slayings to test the nation’s tolerance for lethal police force against people of color. Officers’ cameras captured the recent deaths of Daunte Wright and Adam Toledo. The officer who killed Wright faces manslaughter charges.
There also are reasons for optimism: “This case is a turning point in American history for accountability of law enforcement,” said Ben Crump, an attorney for Floyd’s family.