With quarantine carrying on, Glendale and LA residents put pressure on local government to do better 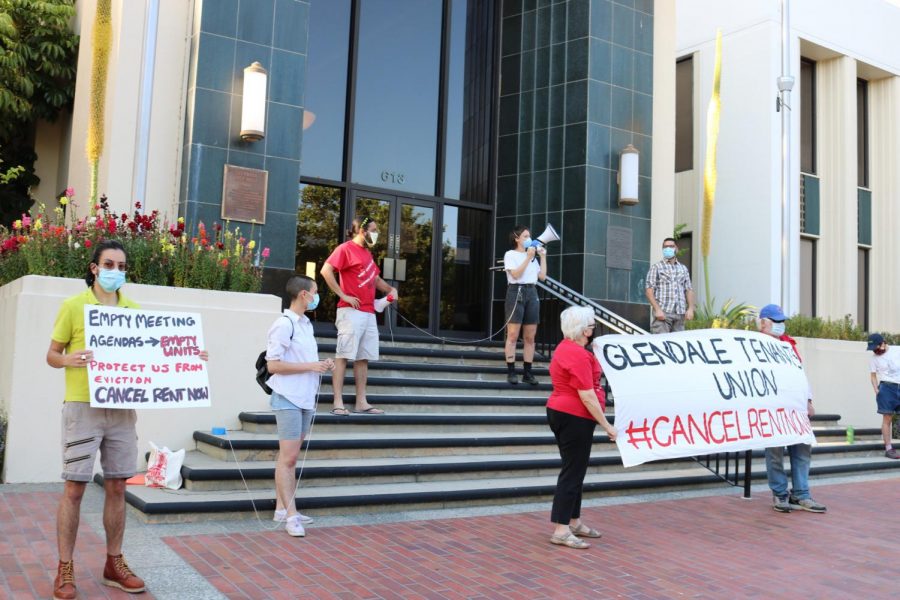 The Glendale Tenants Union (GTU) gathered in front of City Hall Tuesday, April 28 in protest of what they called a lack of action taken to financially protect residents of the city as more and more citizens find themselves unemployed and unable to pay rent.

Around 20 participants, the majority of which being members of the GTU, attended the demonstration Tuesday, all wearing facemasks and practicing social distancing, but determined  to let City Council members know they don’t think they’re doing enough.

El Vaquero spoke to Pamela Agustin, a local resident, and member of the GTU, who was attending the protest Tuesday, proudly brandishing her sign reading, “Comida Si! Rent No!”

“What we’re hearing is fear,” Agustin said of residents who are facing uncertainty when it comes to their rent bills. We are a resource,” Agustin said. “We will help and support you.”

Although the protest only lasted for about one hour, the support it garnered from passersby on the busy Broadway street was difficult to ignore. As the protest went on, cars drove by honking to show their support, many with signs exclaiming “no more rent!” taped to the sides of their vehicles.

Another member and supporter of the cause, Neko Shahbazian (pictured left), discussed a growing concern with the lack of action being taken by Glendale’s City Council, and how it has affected their daily life.

“My partner’s a nurse, so I worry about their health,” Shabazian said. “But now I rely more on my fellow tenants than I do on our city council.”

In our report, El Vaquero found that many residents feel they are not being taken care of during this pandemic. With Glendale having some of the highest numbers of COVID-19 cases in Los Angeles County, the city council is facing increased pressure to begin a discussion on the subject of increased resident protections. Those who protested Tuesday night indicated a temporary moratorium on evictions is not enough.

The public demonstration coincided with Glendale City Council’s regular 6 p.m. meeting, which was live-streamed and is currently available in its entirety here.

Council members did not appear to address the protest, instead they asked questions surrounding the subject of mandatory facemasks for the majority of their time speaking. Some council members were seen floating the idea that the mandatory use of masks in public may do more harm than good, like newly appointed councilman Daniel Brotman, who discussed the efficacy of the masks and showed skepticism on their mandatory implementation in the city. Brotman said he feared masks could discourage healthy behaviors, like exercise, and create a “false sense of security.”

The local protest was just one of many across the United States as more and more residents of major cities continue to struggle with meeting rent requirements, even with the stimulus checks that have been provided.

The LA Tenants Union also has plans for a protest against Gov. Gavin Newsom and Mayor Eric Garcetti, set for Thursday, April 30. They plan to call for the cancellation of rent and mortgage payments during the crisis. More information is available on the LA Tenants Union Website.

Glendale’s confirmed number of COVID-19 cases has grown to 502 as of Thursday, April 30, according to Glendale Fire Chief Silvio Lanzas who received the information directly from the Department of Public Health.

Eian Gil can be reached at: [email protected]