Adam Schiff breaks down the coronavirus relief bill, but where does this leave our most vulnerable students? 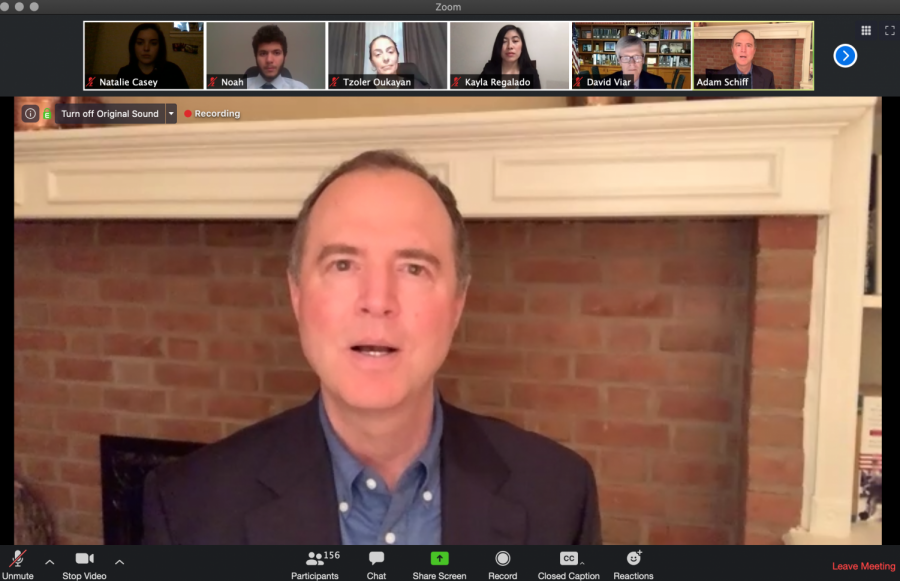 Glendale Community College hosted a student town hall with Congressman Adam Schiff earlier this week. Schiff answered questions about his plans as a congressman for the next coronavirus relief bill, how this is affecting homeless students and shared his opinions on Betsey Devos’ mishandling of aid distribution among DACA students.

Schiff shared that he was previously an adjunct professor at GCC, teaching a political science course while he was in the senate, and again when he was in Congress.

He started the town hall with a discussion of what Congress is doing to address the crisis. He stated that they are establishing funding for health care workers, testing and developing a vaccine. They have also provided resources to small businesses, large industry and resources to hospitals. He finished this introduction with “but much more needs to be done.”

Schiff stated that $12 billion has been funded into the school systems across the nation, and that he is, “Glad that Glendale Community College was able to access $10 million of funding to be split between the college costs, and support for students.”

There is still no word from GCC administration when these funds will be distributed to students in need. Pasadena City College updated its students in early May, and students are reported to have already received their funds.

The congressman touched on the topic of student loans, stating payments have been suspended through September. Schiff seems to be a supporter of forgiving the ever-growing student loan debt (which is over $1 trillion). “Many of us feel that those payments should have been canceled not just suspended,” he said

When asked about how congress will ensure that the pell grant program keeps up with the rising cost of higher education, Schiff answered that his goal is to increase the value of the pell grants. He went on to point out the inequalities between students when it comes to having the proper technology that is required for modern day learning. A laptop or computer, and WiFi access may seem like a basic need, but to some students, these are unattainable luxuries.

“These students are already at a disadvantage even before a pandemic, and one of the things we’re seeing in this pandemic is it is really revealing in a whole new, and really shocking way the number of inequities in our society,” Schiff explained. “The disparity between rich and poor, the unequal access to education and health care…so I’m pushing in the next CARES act to dramatically increase the amount. I’m part of a proposal to provide up to $100 billion for higher education.”

These concerns of technological inequality between students were also expressed by California Community Colleges Chancellor Eloy Ortiz Oakley in his April 14 teleconference. Ortiz emphasized that California is the most technologically advanced state in the nation, and we have a huge inequality problem when it comes to students who can afford the proper tools for online learning.

Anna, an economics major at GCC, asked the congressman about long term housing proposals for the homeless, given that they currently lack the resources to properly practice social distancing. Schiff emphasized that this was a major problem before the pandemic and that congress is “pushing to include 12 billion dollars more towards homelessness in the next CARES package, which we hope to take up in the next couple weeks.”

Schiff stated that Los Angeles is working with the state to access hotel and motel rooms for shelter. Providing food, keeping the homeless population healthy and working on a permanent solution, according to the congressman, would require cooperation from the federal, state and local governments.

GCC’s Associated Student leaders asked Schiff what can be done to advocate for the undocumented students who do not qualify for federal relief? The congressman responded clarifying the bill’s requirements. “The legislation that we passed in the first CARES act did not preclude the use of CARES act funding for DACA recipients and DACA students,” he said. “That is, we think, a tortured reading of the law by education secretary Betsy DeVos. We think she is reading the statue with an eye to try to deny funding to DACA students.”

Undocumented students are currently being excluded from the coronavirus relief bill. DeVos claims the relief funds are for students who are eligible for federal financial aid, which does not include undocumented students. In a letter sent out to College and University Presidents on April 9, contradicting her current policy, DeVos wrote, “Each institution may develop its own system and process for determining how to allocate these funds, which may include distributing the funds to all students or only to students who demonstrate significant need.”

Members of Congress have written to DeVos to let her know she is misreading the bill, but Schiff is not confident she will change her restrictions on the funds. For the future, Schiff plans on putting a more declarative language in the next bill so this is not able to happen again, and urges students to reach out to their representatives and express their concerns.

Schiff ended the meeting pointing out just how unique being a student is right now, and that this will shape how education is done in the future. He extended this thought to the workforce, in the future this will most likely result in more people working from home, which would mean less commuting and a healthier environment. The congressman stated, “In this pandemic, it’s an opportunity to think about building back better. How do we build a more just, a more equitable country as we come out of this crisis”

Natalie Casey can be reached at [email protected]