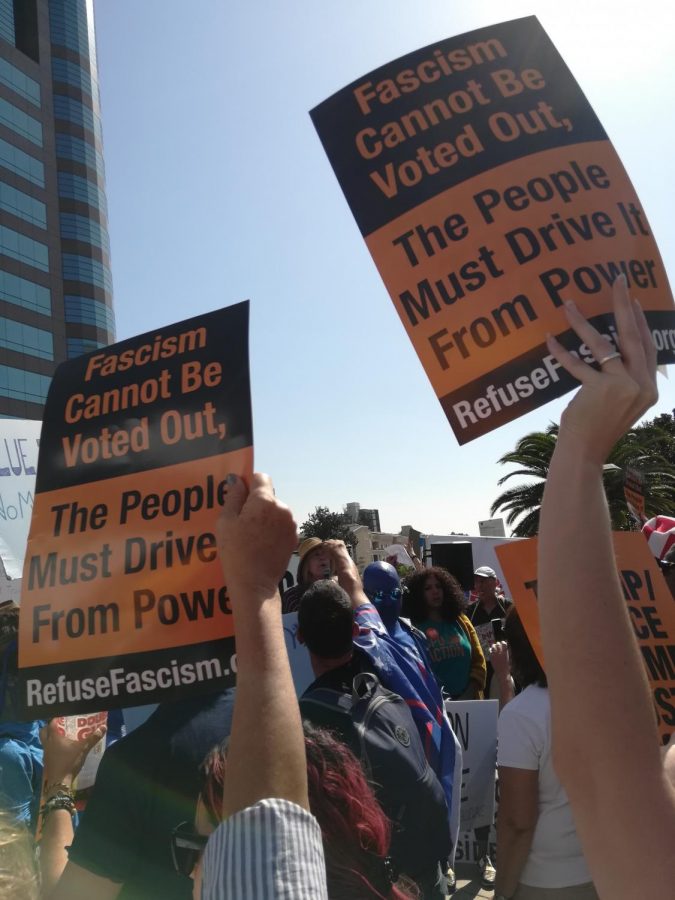 YOUNG AND OLD: Some protesters from the group Refuse Fascism took part in a rally on Sunday, Oct. 13, with people of all ages being present in front of the Federal Building on Wilshire Blvd.

Several hundred impeachment supporters lined Wilshire Blvd in front of the Federal Building on Sunday amidst the cacophony of whistles blowing, car horns honking and a 2/4 chant of “Hey hey, ho ho, Donald Trump has got to.”

In a cheerful nod to the upcoming Halloween holiday, many of the impeachment supporters wore colorful costumes while they waved signs, banners, and, in one case, a toilet brush. There were several people dressed as Trump, a Statue of Liberty with a “SOLD” sign and a group of 5 or 6 people dressed entirely in blue, with blue painted faces, who, when asked why, explained, “We’re the blue wave of democracy.”

Rally organizers with safety vests exhorted the crowd to stay safe, stay on message and to not engage when a small group of Trump supporters tried to disrupt the rally with the rhythmically inert chant of “four more years, four more years.” Despite the instructions to not engage, the impeachment supporters quickly drowned them out with a counter-chant of, “no more years, no more years.” The Trump supporters continued to disrupt the speakers with more chanting, but the rally was generally peaceful with no violent altercations or hat-burning episodes as in other national protests.

As support for Trump’s impeachment grows, rallies are being staged nationally to raise public awareness. Inspired by the Hong Kong protestors, activist group Refuse Fascism intends to protest weekly. There is a planned rally Oct. 19 in Santa Monica and one each week afterward. The protestors plan to spell out “Trump/Pence Out Now” with their bodies and march through L.A. Other groups represented at Sunday’s rally were a small contingent of Trump supporters, Northridge Indivisible and Revcom, and the Voice of the Revolutionary Communist Party.

An interesting impeachment loophole was presented by Benjamin Wofford in the Oct. 10 edition of the Washingtonian, who pointed out that the 2/3 vote necessary to impeach the president in the Senate only requires 2/3 of those present.

Most of the calculations regarding the scant chances of winning an impeachment in the Republican-held Senate have been based on 2/3 of 100, or 67 votes, but the fact that the creators of the Constitution included the word present potentially changes the math considerably.