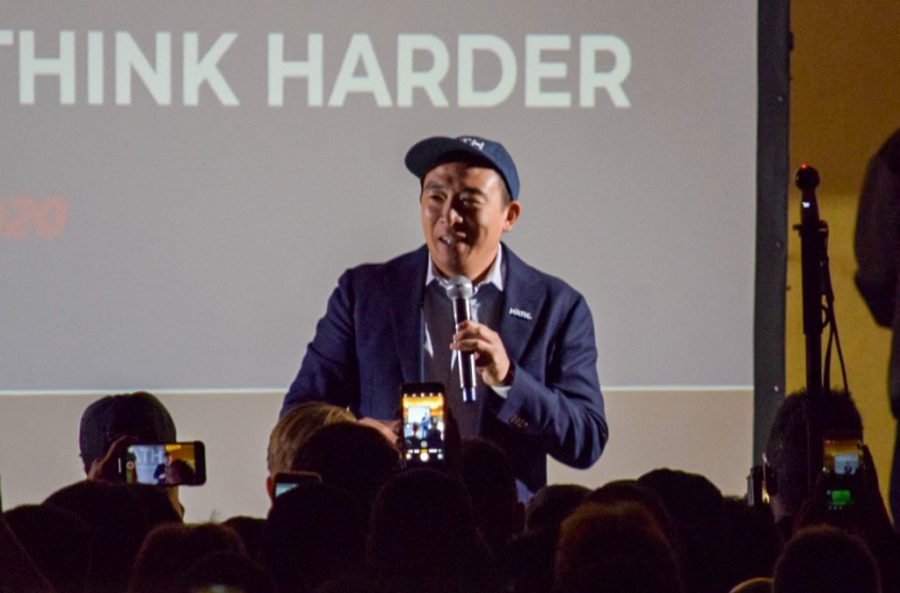 Yang, successful entrepreneur-turned presidential hopeful, delivered a well-practiced 30 minute version of his greatest-hits talking points sprinkled with a liberal use of the f-bomb, because, hey, this is LA. Stressing a humanistic approach as an antidote to the problems we face as a nation today, he offered some radical solutions. And, as he pointed out, “I looked at the numbers, Los Angeles-that’s right, I did the fucking math.”

One of Yang’s ideas is to create a “Freedom Dividend” of $1,000 a month for each American over 18 years of age, which he would fund by taxing billion-dollar businesses like Amazon which pay little to no taxes. He claimed this idea is not original and cited Thomas Paine, Martin Luther King and Elon Musk as others who supported a similar idea.

Yang spoke of the impending loss of jobs created by what he called the “Fourth Industrial Revolution” and said that “we need to rewrite the rules of the twenty-first century economy so they work for us”, and that a freedom dividend would create a “trickle-up economy” which would benefit everyone.

He outlined his vision of  government in which each citizen is a share-holder and proposed to update the GDP, which he claimed is based on incorrect measurements, and to make an annual shareholders report at a State of the Union speech in which he would display how the nation and its share-holders are doing on a powerpoint, at which the crowd spontaneously reprised an earlier chant from the warmup act’s failed presentation of “Powerpoint, powerpoint…”

He also pointed out that the opposite of Trump is an Asian man who loves math. He said that he is the only candidate that Trump has not tweeted about because Trump’s worst fear is someone like Yang who comes out of nowhere who can beat him. Yang said he is that someone and that he is better at the internet that Trump is.

Yang then said that the recent changes in the order of states in the next primary place California fifth, after Iowa, New Hampshire, Nevada and South Carolina, which could potentially affect the entire election, and that our job as Californians was to make sure that we make the most of it.