One worker was seriously hurt and transported a local hospital 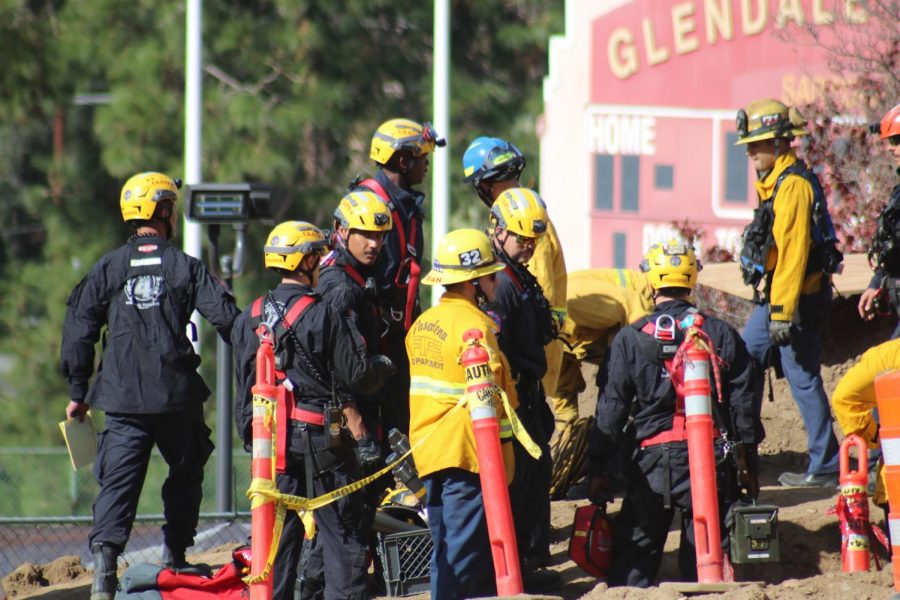 Paramedics and fire officials give medical attention to injured workers on Nov. 15.

A trench collapsed on two construction workers who were installing a sewer line on the Verdugo Campus on Nov. 15, causing severe medical injuries in one.

At the time of the accident, the crews were installing a sewer line on the Verdugo Campus of Glendale Community College.

Glendale Fire and Police Departments responded to the emergency, quickly extracting the workers out of the trench.

As a result of the accident, one worker was covered below his waist and appeared to have acquired severe injuries. It took authorities just over 30 minutes to safely remove the man.

Paramedics transported the man to the nearest hospital for emergency treatment.

Witnesses said that the worker was screaming as he was slowly being pulled out of the trench. The second worker, however, did not suffer from serious damage or pain. He was not transported to the hospital.

Westbound East Mountain Street and the Highway 2 Southbound off-ramp were closed to allow emergency vehicles to get through.

Construction was called off for the day, but crews were seen back on campus several days later.

Directly after the incident, authorities announced that there would be a full investigation by Occupational Safety and Health Administration (OSHA). The latter, is an agency of the United States Department of Labor, which audits and regulates the everyday work environment by setting and enforcing standards, providing training and education and giving further assistance to working men and women.

OSHA concluded that there were code violations within the construction site.

Another recent construction accident on campus resulted in a gas leak that caused the entire campus to be evacuated and classes to be canceled on Oct. 31.