Death toll continues to rise as search and rescue expands 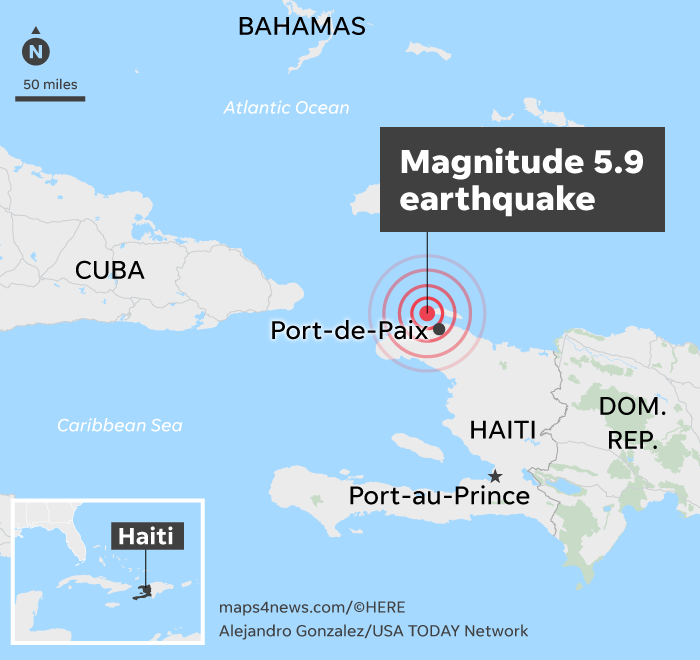 The northwestern coast of Haiti was hit with a 5.9 magnitude earthquake on Saturday. The powerful tremor left 17 people dead and injured more than 350. It damaged countless homes, businesses and commercial buildings. The number of destroyed and damaged homes has stretched as far to 7,800.

According to the U.S. Geological Survey, the temblor hit at 8:11 p.m. local time and was centered in the city of Port-de-Paix. In addition to the strong shock and many powerful aftershocks, conditions were worsened as heavy rains flooded the streets of the city.

Along with international search and rescue teams, national emergency personnel have since deployed to the quake zone, to aid in the reconciliation process and efforts.

Known as the poorest country in the Americas, Haitian hospitals in Port-de-Paix, are laboring hard in order to cope with the fallout of the earthquake. “We are in the streets. We don’t have anywhere to live. Our home is destroyed,” Agathe Beaubrun told the Miami Herald upon arriving at the main public hospital of Port-de-Paix. “All of the children are crying. We don’t know what to do.”

The earthquake set off panic in many cities in Haiti and its neighboring countries. President Jovenel Moïse encouraged populations to remain calm as search and rescue efforts continue.

“Prime Minister Jean-Henry Ceant is coordinating the relief operations,” Moïse tweeted. “I asked him to mobilize resources of the republic to help.”

The shake has been felt as far away as Haiti’s capital city of Port-au-Prince, where many people are still recovering from the massive 2010 earthquake, which resulted in the loss of 200,000 lives.