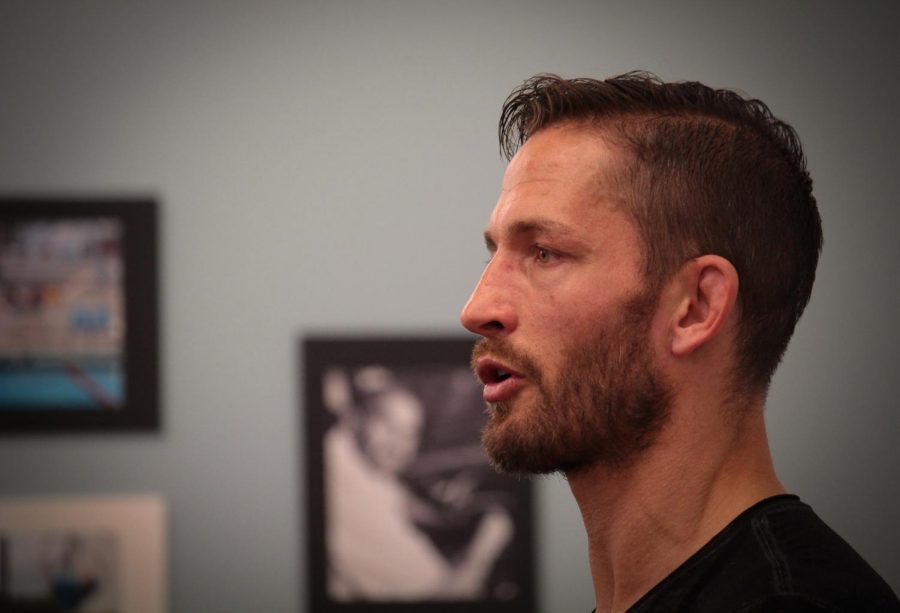 Marcus Kowal talks to the audience about the hazards of drunk driving.

Swedish MMA fighter Marcus Kowal and his wife, Mishel Eder, visited Glendale Community College on May 16 to speak about the hazards of drunk driving and talk about their harrowing experience of losing their baby to a negligent driver.

They set up an organization, Liam’s Life, which aims to change the culture of drinking and driving through awareness and knowledge, promote safety and educate people on the demand for organ donation.

On Sept. 3, 2016, the 15-year-old sister of Eder took their 15 month-old-son Liam Mikael Kowal on a walk not far from the Hawthorne training center that Kowal operates. As she took Liam through the crosswalk in his stroller, they were struck by the vehicle of a 72-year-old drunk woman.

Donna Marie Higgins, the woman who killed Liam Kowal that day, was sentenced to six years in prison in August of 2017 for vehicular manslaughter.

Kowal described the tragedy from his point-of-view. “I woke up from sirens and I thought it was the alarm from the gym downstairs,” he recalled. “I said to my wife, ‘the alarm in the gym is going off.’” She replied, “No, it’s police and ambulance sirens.”

Eder called her sister numerous times with no answer, as she left off in search for them. “One of my neighbours came to the stairway and I came out from my apartment, and she said to me, ‘Your baby, your baby.’

I ran out in the street to find Liam’s stroller in two pieces and the little green frog he had with him every single day and slept with every single night lying in the middle of the street,” Kowal continued.

Liam was alive but in critical condition. Hours later, the baby’s short-lived life was over. He was declared brain dead.

Soon after, the doctors asked if the family wanted to donate the organs. It took them two minutes to say yes. In those two minutes, however, they came to the realization that their child was gone.

After the child’s organs were placed on a donor list, Kowal created a post on Facebook asking any friends or family to contact him if in need, “I didn’t want to share with the world what was going on, but I figured that was going to be the fastest way to get it out. It was shared over two thousand times.”

People started writing and begging him to have sympathy for their situations. Mother’s messaged him with pictures of their babies pleading with him to donate a liver, kidney, etc. During this time the family didn’t know just how much attention the accident had received. While at the hospital someone got ahold of Kowal’s cell number. Media as well as desperate families, called unremittingly.

Though he was in mourning and despised the calls, they opened Kowal’s eyes to the amount of people in need of a donor. On average 22 people die everyday waiting for an organ, according to Kowal. With that, they decided to donate Liams’ kidneys to a young woman, whom they have contact with via text. The family has plans to meet her in the near future but has not worked up the strength.

Unfortunately, Liams’ liver and heart were too damaged to be donated. But the overwhelming demand for organ, eye and tissue donations gave Kowal a new inspiration. To bring change in society and understanding to human morality. “People can give life and live on through others” according to Liamslife.org.

Over a year-and-a-half’s time after the passing of their son, the couple has intensely studied the legal system in America to understand how best to affect change. Kowal stated that every 53 minutes a person is killed by drunk driving; the equivalent to a jumbo jet crashing every week. Drunk driving is the most common cause of the death among young adults; more common than gun violence.

Law enforcement, for example, consider vehicles a lethal weapon when under the control of man and handle with the highest level of force. However, at the 0.05 drinking limit the same as two pints of normal-strength beer. The law considers an individual “legally drunk” at which they may make the decision to handle a vehicle. Between 0.05 and 0.08 an individual can be detained, but not prosecuted, for drunk driving.

Liam’s Life foundation’s motto is ‘making the roads safer,’ and the logo used is a green cartoon frog, symbolic of the one Liam always held with him. Kowal and Eder, creators of the foundation, fight to change the drunk driving limit from 0.08 to 0.05, which will create a higher regard for safety. Many European countries have implemented this change and the death rates from drunk driving has dropped by nearly 50 percent.

The family has reached out to politicians imploring one of them to have the ambition to take on this fight. “Being in this world of lobbyists and politicians we were told, ‘You’re never gonna win this fight.’ You’re up against giants,” Kowal stated with little worry. “What they’ve never been up against is someone like me.” In a business that’s centered around wealth, its rugged ends mean little to a family whose sole purpose is to honor the death of their son.

They recently flew to Sacramento to meet with California Lt. Gov. Gavin Newsom, who now stands behind the fight. Newsom is the top candidate for Governor of California this upcoming election, and Kowal has said that Newsom pledged to help fight for Kowal’s cause. Though they received the help of Newsom, no other political candidates or current legislators have vowed to sponsor or carry a bill that would lower the legal drinking limit in California from 0.08 to 0.05 (Ken clarifications in grey).

Today, the foundation’s mission statement is to increase the total amount of organ donors by 20 percent. Eventually, they hope to make the law similar to other countries, where you are automatically registered as an organ donor but have the right to opt out.

They also work on informing and influencing the public on the dangers of drunk driving through advocacy, through the state legislature, and commercial/promotional short films.

Liam lives on through his mother and father, as they pursue social change and illustrate selflessness. Kowal finishes by saying, “Ultimately, what bigger sacrifice can you make, than to make sure someone else lives because of you.”

Christopher Daniels can be reached at [email protected]