To some, Glendale College wasn't just another step, but a whole new beginning 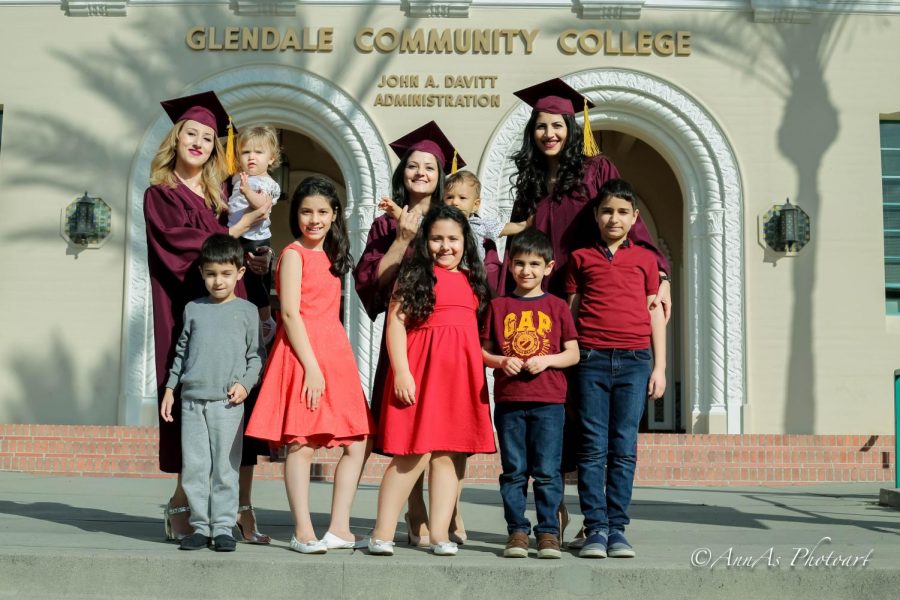 Strolling through GCC, the graduating supermoms

To some, Glendale College wasn’t just another step, but a whole new beginning.

To most, graduating from community college seems like no sweat; though it takes someone who has crossed the long, bumpy road, to frankly understand ‘the true struggle’ of a community college student. As hundreds of students walk down the aisle to receive their certifications and degrees on June 13, they will each take away something beyond the hardcover diploma. Some in a form of a lesson, others in the form of lifelong friendships and memories.

As they collect diplomas, turn their tassels to the other side of the cap, they also mark the turnaround of a new milestone in their lives, a change and chance to celebrate all that they’ve acquired and achieved during their years here at Glendale Community College.

Among those graduating, are three supermoms, Anna Sargsyan, Armine Sahakyan and Tamara Grigoryan, who despite many mommy challenges, cultural differences and some language problems, stuck to their goals and built a brighter future for themselves.

With the help of one another, their loving husbands and caring professors, they, along with many of their peers and friends, deviated from the old Armenian tradition of a ‘stay at home mom.’

Sometimes they took classes that were hard, which kept them up all night, studying much harder than a typical student would.

A new language, different norms and a whole new world of education, were just a few of the things these women had to deal with. Well, at first.

All three ladies even got pregnant around the same time in 2016, and went through pregnancy together, as they had done with school. They watched one another’s other kids when needed, helped each other with schoolwork at other times. They created a friendship that will last a lifetime.

Anna is the strongest friend. Not just physically, but also emotionally. Her strength and positivity empower her friends daily.

When Anna and her husband moved their two young sons to the United States from Sweden, they did not know too many people in their new country. She described the transition as ‘smooth.’

One thing she did struggle with, though, were mommy things here in the U.S. She did not have a big support group of moms to tell her what products are good for her kids, or tips on how to keep the Armenian identity in their kids. She created a private Facebook page, naming it  “US Armenian moms.’’ This will soon become a destination for 4,700 Armenian moms for any kind of advice.

She started to go to college, to take some classes here and there, when she decided to go back to her biggest passion in life, photography.

Aside from photography, she recalls painting as a young child. She says that she got her love for art from her mother’s side. As a kid, she collected money so she could purchase her first camera, which she still owns.

She continued to photograph nature and people, through the scenic towns of Sweden. Then here in Los Angeles. So when it came to picking a major in college, it was a no brainer for her. Photography it was.

Last year, when Anna lost her baby to complications, her world came crashing down. But once again, she found an escape through the lens of her camera. She started taking photos. Every click of the camera became a reason for her to love and live. She’s had some good days, and many bad since the event. On bad days she simply escapes to capture her raw surroundings. Her perseverance has been stronger than her misfortune.

Among the incredible women graduating this year, was Armine, a total smiley face. She is the kind of person who fills the room with so much cheer and laughter, making her company enjoyable beyond words.

She, too moved to the United States with her young kids and husband, and had to go through the difficulties of an immigrant.

She described the experience as ‘tough’ but doable if your mind is in the right place. She couldn’t help but get reminiscent when asked about her life back at home, in Armenia. Armine also made it a point to say that her relationship with her husband is one of the best aspects of her life. You could see the love in her eyes.

When asked about their relationship, Armine said that she and her husband are a ‘crazy’ couple. They always did the unimaginable, constantly keeping their loved ones on their toes with never-ending pranks.

“It’s another one of your pranks,” their relatives told them upon hearing the news of Armine family moving to the U.S. To their disappointment, the family did move.

She remembers the first set of hardships she dealt with was not having a car to commute to school or a way to pick up her kids from school. Her only way to get around was with a bus, which she dreaded getting onto. She often missed exits and was always afraid to get lost. This happened to her on multiple occasions.

Though this was hard, she never allowed the negativities affect her happy personality. She was thankful for the opportunities. She continued to go through school, choosing one of the hardest major of business administration.

After graduation, Armine wants to take some time off to focus on her family, after which she wants to transfer to a 4-year university to continue her education. She dedicates her degree to her mother, who has believed in her beyond measures.

Tamara is the sweetheart of the bunch, a soft spoken lady. Her main inspirations in life are her two young kids. She says that she wants to set an example for her them by doing what is right for herself.

She and her husband fell in love, when he visited Armenia from Los Angeles. Upon meeting, the two instantly fell in love, they just matched. Soon enough, they were thinking about marriage and starting a family. Some time later, Tamara joined the love of her life in the United States, where both of her children were born.

Having dealt with a fair share of her own difficulties, Tamara says that the biggest thing that living in the new country has done for her was changing the way she perceived herself. She believes that the American society encourages individuality and independence. She learned to be just that.

She also talked about the big role of counselors and professors in the life of a student, and how lucky she was to have met some of the best mentors here at GCC, as she studied for her major of Accounting.

Tamara remembers the tremendous amount of support her professors gave her during her pregnant times. She would often have to leave class early or not attend at all, due to pregnancy check-ups and other procedures. It was hard, but she did it because of the support and encouragement she got from others.

During our interview, all three ladies expressed their deep gratitude for the school counselors, professors and one another for supporting through their bumpy roads.